Inside the Milberg Gallery: The Alchemist and the Blacksmith

The following is the third in a series of inside looks at the current exhibition in Princeton University Library’s Ellen and Leonard Milberg Gallery at Firestone Library, “Through a Glass Darkly: Alchemy and the Ripley Scrolls 1400-1700.”

The Alchemist and the Blacksmith

In both the 1550 and 1568 editions of his Vite degli Artisti (Lives of the Artists), Giorgio Vasari describes a series of prints completed by the Sienese artist Domenico Beccafumi (1486-1551). He reports that Beccafumi “etched some very capricious stories of alchemy, showing how Jupiter and the other gods, wanting to congeal Mercury, tied him up and put him in a crucible; while Vulcan and Pluto stirred up the fire around him.” The result of this operation was that “Mercury flew away and went up in smoke.”1

This citation is usually taken to refer to a series of ten prints by Beccafumi depicting a similar subject. However, there are some problems. Where Vasari describes a series of etchings (stampò con acqua forte), the surviving prints are, in fact, woodcuts. Instead of the gods “conquering” one another as Vasari describes, the imagery across the series follows an artisan/metallurgist and a sage alchemist-philosopher, who together master the seven core metals (gold, silver, quicksilver, copper, iron, tin, and lead), here personified as classical gods.2 These inconsistencies between the written and visual record suggest both Vasari’s imprecision and misremembrance – or perhaps even point to another, now lost series by the same artist. However, the coupling of the two sources reveals a second, more significant historical phenomenon: the intermingling of artisanal and alchemical-metallurgical knowledge within artists’ workshops of the cinquecento. 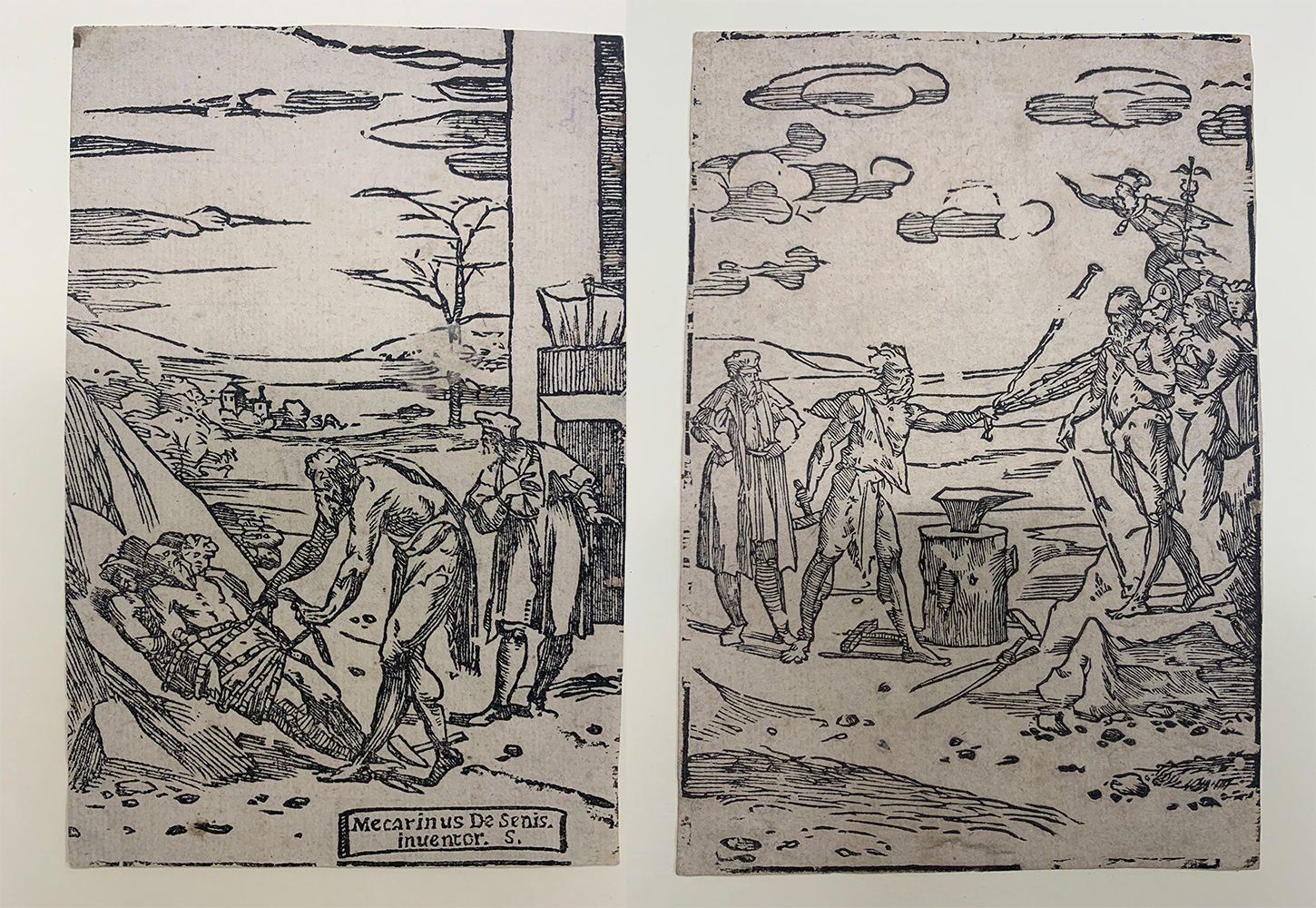 The two prints displayed in the exhibition Through a Glass Darkly – loosely entitled The Barber and The Blacksmith (see image above) – are the most dramatic of the series. Together, they testify to the artist’s knowledge of metallurgical theory and practice. Following scenes in which the metals are assayed and extracted, in The Barber they have finally been captured. The artisan, clad in modest cloth and an overgrown beard, takes center-stage, tying a group of metals with restraints against a boulder. The choice to allegorize the metals as planetary deities follows alchemical and metallurgical textual tradition, wherein each metal has a planetary equivalent. The bearded figure at the front of the restrained group is Saturn, his age and frailty aligning him with lead, the oldest and most corruptible of the seven core metals.3 At least two other figures, already restrained against the rock’s adjoining face, peer over at the action, mirrored in the figure of the alchemist-philosopher at far right, who cautiously watches over the artisan’s shoulder. 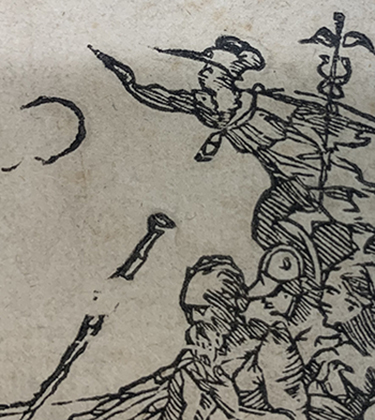 In the following scene, The Blacksmith, the shackled metals are led by the artisan to the anvil to be worked. Saturn again leads the pack, with a helmeted Mars (representing iron) and a robed Venus (copper) following behind. A winged Mercury flies above, personifying the more erratic – and free-flowing – quicksilver. It has even been suggested that the broken ink in Mercury’s lead (image at left) further indexes his metallic volatility, as though he has broken free and is again out of the artisan’s control.4

The various accoutrements surrounding the anvil, coupled with the artisan’s pickaxe, poised and ready, prefigure the actions to come–as tools of tempering, taming, and transformation, they reinsert the manual within an allegory of man versus nature. Indeed, though images of defeat and even violence for the metals–the end of their life as natural matter–these scenes mark the inception of creation for the craftsman, wherein the metals will be refined and transformed, welded and cast. 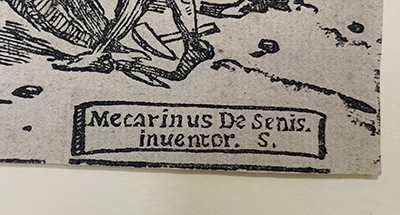 Beccafumi’s invocation of manual craft is furthered in the accompanying text. In The Barber, with a self-reflexive flourish, Beccafumi signs the series: “Mecarinus De Senis./ inventor. S." In this signature, Beccafumi (known under the moniker “il Mecherino”) not only identifies himself as the designer of the compositions (inventor), but he also takes credit for carving the blocks himself (“S.” for sculpsit) (image at right).

This may serve as testament to the supposition, invoked again by Vasari, that Beccafumi always insisted on carving his own blocks.5 It also points, however, to an intermedial and rhetorical play: in depicting the metallurgist at work, Beccafumi seems to anticipate his own experiments in bronze of a few decades later, seeing three-dimensional processes in two, and thereby extracting, refining, and casting metal, not by fire, but through print.

Apart from Vasari’s loose description, we know little about who commissioned the prints, or how they were supposed to function. It has long been suggested that they were intended to illustrate an alchemical or metallurgical text of some kind, and, while no bound or annotated copies survive to confirm this, the thick laid paper and coarse impressions do insert the works within a tradition of the printed book.6 What can be determined with more certainty is that the series was widely printed and distributed in Beccafumi’s own time, evidenced in the large number of surviving early impressions, just as later impressions reveal its value long after its inception. The popularity of these prints further suggests that alchemical interests were growing more interwoven with metallurgical ones within the episteme of sixteenth-century Italy and, in turn, within the artist’s workshop. Beyond that, alchemy was rising in popularity at this time, with an increasing number of printed, vernacular texts. The Barber and The Blacksmith, at once indexing metallurgical knowledge and its symbolic origins, also suggest how an appreciation of metallic generation and allegory may have moved beyond both alchemical workshops and artists’ studios, and entered a larger, less specialized, visual discourse.

Through a Glass Darkly: The Visual Culture of Alchemy conference will be held May 26-28, 2022 at Princeton University. This conference will explore the visual language of alchemy within the broader cultural and intellectual context of pre-modern Europe. Visit ripleyscrolls.princeton.edu for more information.

Written by: Sharifa Lookman. Lookman is a Ph.D. student in the Department of Art and Archaeology, specializing in the art of early modern Italy. She has recently been engaged in research on the risks and technical failures endemic to early modern casting, but holds interests more broadly in worksites and workshop practice, the traffic between and across media (intermediality), and the rise and reuse of experimental color technologies over time.