Princeton University Library’s (PUL) Librarian for History and African American Studies Steve Knowlton was elected Chair-elect/Vice-chair of the American Libraries Association’s (ALA) Library History Round Table (LHRT). The role, which began on July 1, is a three-year voting position on the LHRT executive board.

LHRT serves to “encourage research and publication on library history and promote awareness and discussion of historical issues in librarianship,” according to the group’s website. “There are several ways we do this,” Knowlton explained. “We publish a semi-annual journal, Libraries: Culture, History, and Society; we hold an annual lecture series and research forum for scholars to talk about their research; we have an active blog/website called ‘LHRT News and Notes’ for publication of shorter research and exchange of information about historical topics and research opportunities.” 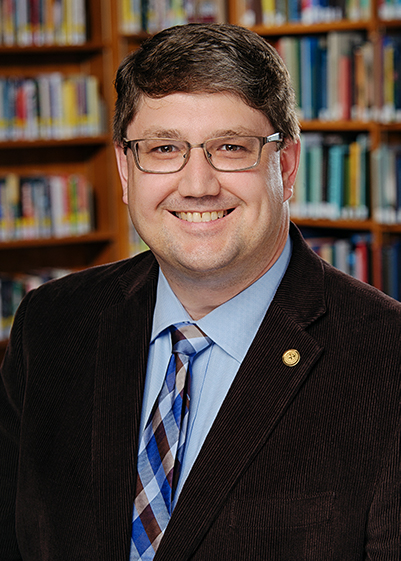 Additionally, Knowlton and LHRT continue the traditions of presenting awards for works of library history as well as holding a monthly book club to discuss recent monographs in the field. His role will specifically work with the LHRT Chair to appoint committee members and oversee the research forum and work of the award committees.

“I’ve been interested in library history since I was a student in the School of Library and Information Sciences at Wayne State University, where we were exposed to the history of libraries as a foundation to learning the principles and practices of librarianship,” Knowlton said.

Since 2005, he has written a number of pieces on library history, including, “Three Decades since Prejudices and Antipathies: A Study of Changes in the Library of Congress Subject Headings”and “Power and Change in the U.S. Cataloging Community: The Case of William E. Studwell’s Campaign for a Subject Cataloging Code, as well as “Why Are Some Sources Archived and Not Others?”.  His papers have twice been awarded the  Justin Winsor Library History Essay Award, once for his manuscript on the place of segregated libraries in the Civil Rights Movement of Memphis, and once for his study of the response of academic librarians to the advent of Black Studies programs in the late 1960s and early 1970s.  Another Memphis-related paper on “The Foundation of Cossitt Library and the Inauguration of Library Service to African Americans in Memphis and Shelby County,” was honored with the Marshall Wingfield Award by the West Tennessee Historical Society.

In 2019, Knowlton was elected to a three-year term as LHRT’s secretary-treasurer. He also served on an ad hoc committee to help LHRT plan for impending changes in the overall structure of ALA, and as LHRT’s representative to the body responsible for standardizing membership dues across ALA.

“I find it quite rewarding to engage with the eager scholars and volunteers who do so much to illuminate the history of our profession and institutions,” Knowlton said. “I understand how researchers go about their work, what they need from a library and from librarians, and common problems they will encounter.  This makes the conversations I have with our patrons richer, deeper, and more fruitful.”

Knowlton’s election to the position comes during the same summer in which he was honored with the Captain William Driver Award for best paper at the annual North American Vexillological Association (NAVA) Conference, as well as received a Presidential Citation from NAVA’s board in recognition of his work as editor of its quarterly magazine, Vexillum.  Vexillology is the study of flags.

More recently, Knowlton was named a Fellow of the Fédération internationale des associations vexillologiques, a multinational association dedicated to vexillology, for his efforts to digitize the published proceedings of the federation’s conferences dating back to 1967.