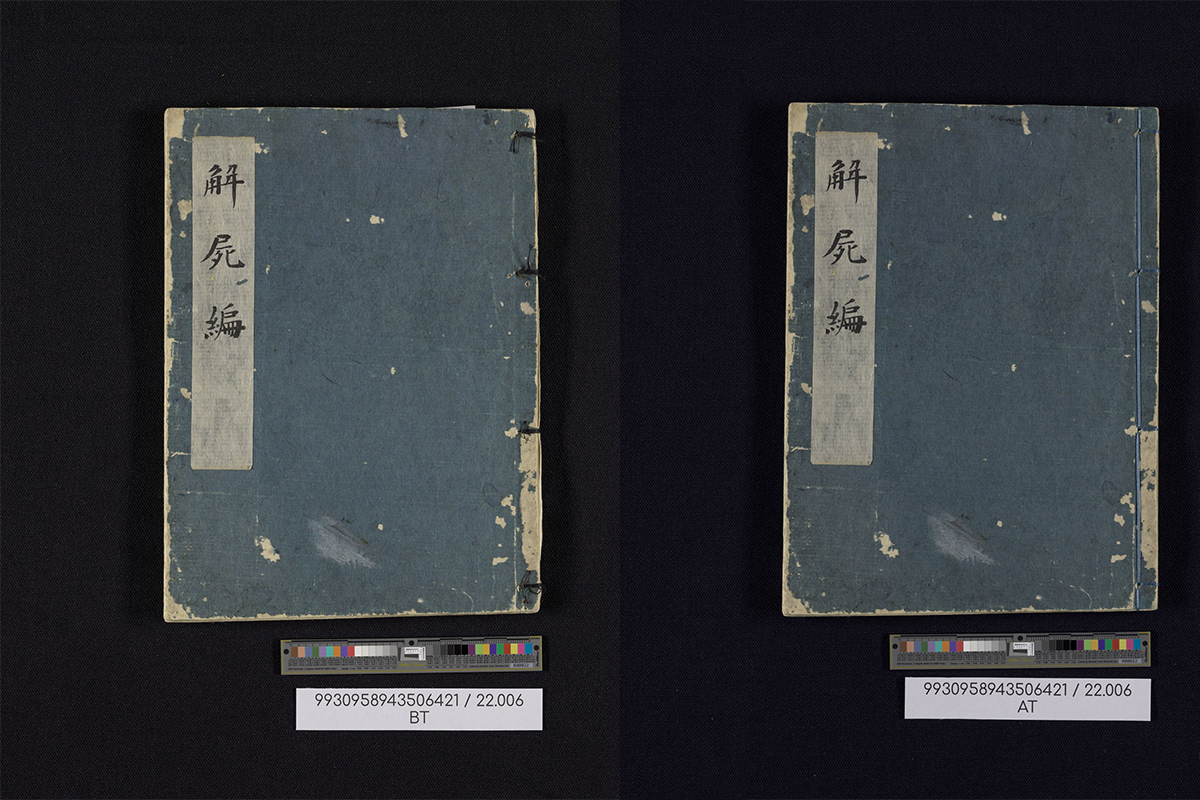 Left to right - before and after views of treatment for the book Kaishihen. The sewing near the book's spine has been stabilized. Photo credit: PUL Digital Studio

“Kaishihen,” a rare Japanese book of anatomy, is now on display as part of Fondazione Prada’s latest exhibition, “Human Brains.” The exhibition, held from March to November 2022, is a deep dive into neuroscience that seeks “to understand the human brain, the complexity of its functions, and its centrality to human history.”

Fondazione Prada is an Italian cultural institution dedicated to the promotion of contemporary culture, founded in 1993 by Miuccia Prada and Patrizio Bertelli.

The institution’s interest in “Kaishihen” stems from its existence as Japan’s second anatomy book published in 1772, two years before “Kaitai shinsho” — which in turn is a translation of “Ontleedkundige Tafelen” (1734) — a title often considered the first and the most authoritative anatomy book at the time in Japan.

Unlike “Kaitai shinsho”, “Kaishihen'' is based on an actual autopsy held by Kawaguchi Shin’nin, Harada Yōki and other seven medical officials at the execution ground in Kyoto in 1770. Kawaguchi worked for Koga-han (Koga Domain) as a feudal doctor and was interested in Western medicine. 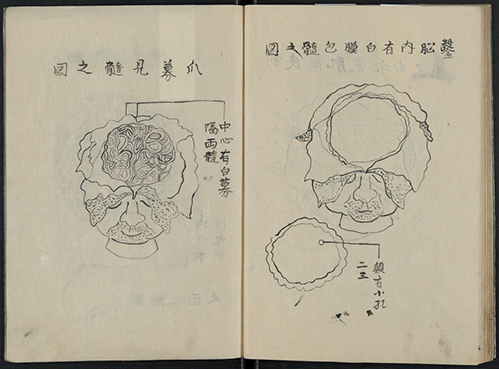 Brain anatomy as illustrated in Kaishihen.

What was unique about Kawaguchi is that unlike his predecessors, he conducted the autopsy by himself with two customized scalpels. This was a sensational event at the time, because handling dead bodies was largely seen as taboo. His autopsy was thoroughly recorded in “Kaishihen,” and included the elucidation of the brain and optic nerve with four images, which is the first record of brain anatomy in Japan.

PUL’s “Kaishihen” is the single manuscript copy held in North America and five libraries in Japan. The print edition is held by seven institutions in Japan and three in the US. The Library’s copy is also a bound-with with “Kyūten zukai,” an illustrated guide of acupuncture by Kagawa Yoshime (1756).

Following the loan request by Fondazione Prada for the exhibition, “Kaishihen” was digitized, received conservation treatment by Victoria Wong, and shipped to Venice, Italy. It is a small, plain manuscript (23 centimeters with 32 leaves in black and white) but filled with interesting stories.

Related reading: How does Preservation and Conservation treat its items?