Alan Stahl, Princeton University Library’s Curator of Numismatics, gave the plenary keynote lecture at the International Numismatics Congress in Warsaw. Held once every six years, the congress draws the world’s leading scholars of coins, medals, and currency for a series of roundtables, poster sessions, and exhibition visits for the promotion, conservation, valorization and fruition of the material and immaterial Cultural Heritage. 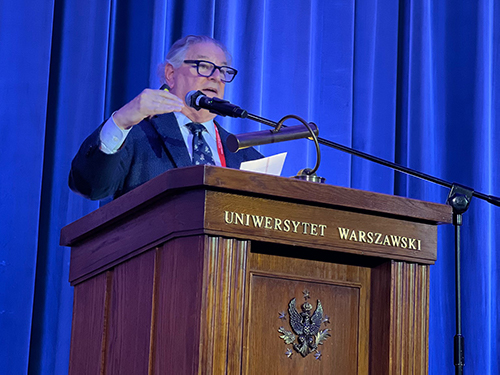 Stahl’s address covered the work being done to digitize and contextualize the 24,000 coins in Princeton’s collection from the Antioch expedition. “I began the talk with the showing of a silent film taken by the Princeton Antioch Expedition in 1933, during which I gave a brief history of the excavation, including the various reasons for which its findings have never been published,” said Stahl. He used the 24,000 coins as a historical reference point – among other things, the coins track the chronology of buildings, artwork and religious rule.

Stahl noted that Princeton students have been particularly involved with the project. “Students have done virtually all of the cataloging and photography of the Antioch excavation coins that have been added to the Library catalog,” Stahl said. “In the process, two of them have made discoveries that have ended up as published articles co-authored with me, and one has given his findings at the Princeton Research Day,” Stahl said. Student-produced results from the study of the coins are also on display on an Antioch excavations website.

Princeton University was well represented throughout this year’s meeting. In addition to Stahl’s plenary lecture, two sessions during the week-long program featured work done in projects centered around Princeton. The FLAME Project (Framing the Late Antique and Medieval Economy) presented a session organized by Associate Professional Specialist Mark Pyzyk, whose position coordinating the project’s database has been supported for the past two years by the Initiative in Comparative Antiquity under the sponsorship of the Humanities Council.

Another session organized by Alan Stahl carried on the theme of Antioch and its coinage with papers by Jane Sancinito (University of Massachusetts, Lowell), Kristina Neumann and Peggy Lindner (University of Houston), Pavla Drapelova (Czech Academy of Science) and Kirstin Ohrt of Princeton’s Department of Art and Archaeology, whose work on the coins of the Antioch Excavation is supported by the Friends of the Princeton University Library. In addition, Elena Baldi, who will be joining the Numismatic Collection in October as its specialist in Byzantine coinage with the support of the Seeger Center for Hellenic Studies, reported on a newly discovered hoard of Byzantine coins in Aswan, Egypt.