Inside the Chronicle: Reuniting the Two Halves of an Extraordinary Annotated Book: The Princeton 1525 Ptolemy

The following is excerpted from the Spring/Summer 2022 issue; Volume LXXIX, No. 1.

Reuniting the Two Halves of an Extraordinary Annotated Book: The Princeton 1525 Ptolemy, by Chet Van Duzer

This article begins with the story of my engagement with a remarkable book, a very heavily annotated copy of the 1525 edition of Ptolemy’s Geography. For a few hundred years the two parts of the book, the text and the maps, had been separated, but they are now together again in the Princeton University Library. Following that history I will describe some features of the book’s prolific program of annotation, which—unusually among early modern annotated books—was composed for a student, so that the annotations represent a program of geographical education in the early sixteenth century. 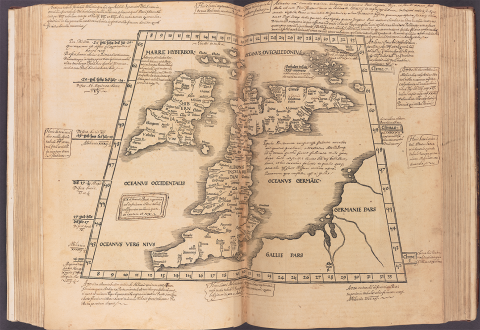 I first encountered Princeton’s 1525 Ptolemy during a presentation by Professor Nicholas Popper at the 2014 conference of the Renaissance Society of America.1  In that presentation he included an image of one of the heavily annotated maps from the 1525 edition of Ptolemy’s Geography at Princeton.2  I had seen quite a few annotated copies of the Geography, but the map he showed from the Princeton copy was extraordinary for the abundance of its handwritten notes, both in the margin and on the map proper (see image above). From Princeton’s online catalog, I learned that the library had acquired the volume with the purchase of Grenville Kane’s collection of rare books in 1946.3  Stephen Ferguson, then curator of rare books at Princeton, generously provided some images of a few of the maps that allowed me to read some of the annotations, which are written in Latin. In addition to starting to get an idea of their contents, I realized that the annotations had been written by a scribe: they were much more neatly written than the crabbed notes by scholars that I had seen in other annotated Ptolemys.