Inside the Milberg Gallery: Role of the Mapuche People in Chile’s Estallido Social

The following is the fourth in a series of inside looks at the current exhibition in Princeton University Library’s Ellen and Leonard Milberg Gallery at Firestone Library, “Records of Resistance: Documenting Global Activism 1933 to 2021.” Curated by Fernando Acosta-Rodriguez, Ellen Ambrosone, Will Clements, David Hollander, and Gabrielle Winkler, this new exhibition captures continuity and change in practices of protest and activism in diverse geographic contexts and around issues that may be particular to an area or of universal concern.

During the 2019-2020 nation-wide protests known in Chile as the Estallido Social (social outburst), people across the country took to the streets in numbers not seen since the return to democracy in the early 1990s demanding a profound transformation of the economic and political model. Ubiquitous among many of the mass protests was the display of the Wenofuye, the flag of the Chilean Mapuches. 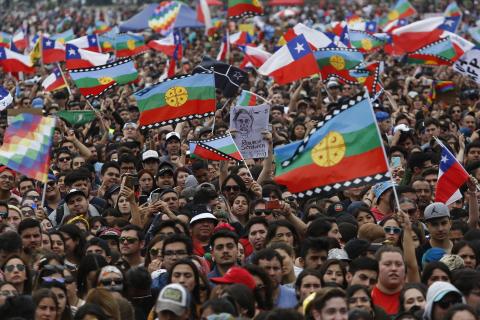 Display of the Wenofuye, the flag of the Chilean Mapuches. Courtesy of Getty Images.

Making up approximately 12% of Chile’s total population, the Mapuche people are the largest group among Chile’s historically marginalized indigenous population. During the Estallido Social, Mapuche organizations incorporated their own demands for rights to land, natural resources, participation, and political autonomy to the broader set of denunciations expressed by protesters.

The “Chile’s Estallido Social of 2019” component of the “Records of Resistance” exhibition, currently open in the Milberg Gallery at Princeton University Library (PUL), includes various pieces from the Latin American Ephemera Collection that powerfully depict Mapuche grievances and demands which figured prominently during the mass protests. For example, in the anonymous print currently on display that is shown below, Mapuches forcefully demand the exit of the Chilean state from the Wallmapu—the name in Mapudungun (Mapuche language) of their ancestral lands in southern Chile and Argentina. 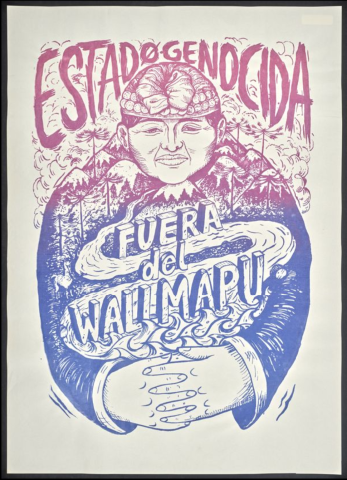 Similarly, we see in the following print an artistic representation of the strong arm of the Chilean state as it extends its grip on the Mapuche and violently exploits resources extracted from their ancestral lands. In a photograph taken on December 18, 2019, the print appears in the upper left corner in the image of a wall along with numerous other flyers, posters and graffiti. This display was found outside of the Centro Cultural Gabriela Mistral, an important public space in the heart of the city of Santiago.

Interventions such as these were modified or destroyed soon after the photographs were taken. PUL, in collaboration with Princeton graduate students who compiled dozens of photographs documenting forms of visual resistance, is preserving and making publicly available a photographic record of these expressions through the digital collection Colección Archivo Fotográfico de la Protesta en Chile 2019.

Students and scholars interested in studying Mapuche history and culture will be pleased to learn that PUL’s holdings related to the indigenous group are unparalleled. Library collections include hundreds of books, many of them completely or partially written in Mapudungun. Numerous rare and sometimes unique items, including rare books, periodicals, posters, flyers, and brochures, and other types of documents, can be found among the Library’s Special Collections and in the Digital Archive of Latin American and Caribbean Ephemera. The linked text in the previous lines will direct readers to many of those resources.

The exhibition will run from September 7 through December 11, 2022. It is open daily, Mon-Fri from 10 a.m. to 6 p.m., and from 11 a.m. to 6 p.m. on Saturdays and Sundays. Guided tours are available. Please note Princeton University's current visitors policy.