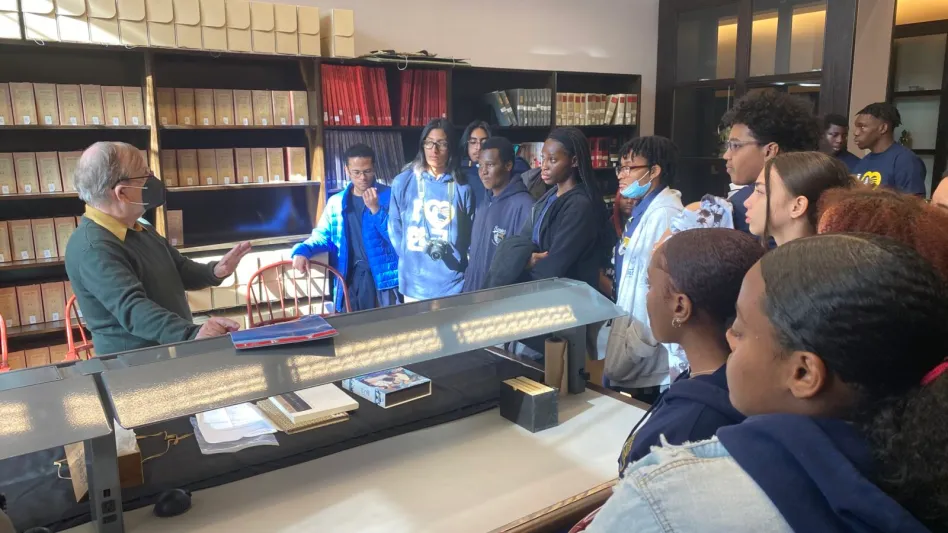 Approximately 50 students from the Democracy Prep Bronx High School visited Princeton University on October 18 as part of the High-Versity Day project. The visit, organized by Ho Jung Choi, Director of the Korean Language Program, and with support from the American Association of Teachers of Korean (AATK) and Princeton’s East Asian Studies Program, was part of a Korean culture week, which sought to provide effective spaces and new possibilities for the community-based language learning (CBLL) and meaningful community engagement.

The High-Versity Day project aims to build successful partnerships between Korean language programs and local education centers, with the goal of enhancing the communicative and cultural competence of Korean language learners from diverse communities at all levels of education. In this case, the Korean language is the only foreign language offered by the high school, which has a 99 percent minority enrollment.

In addition to visiting the East Asian Library (EAL), the day visit to Princeton included a campus tour, a stop at the Syngman Rhee Lecture Hall, a Korean lunch at the Campus Club, cultural experiences of Hanbok (traditional Korean clothes), chaekgŏri (traditional Korean paintings of books), a meeting with the Korean Students Association of Princeton University (KSAP), and the learning of K-pop dance moves (featuring KoKo Pops members) at the New South Dance Studio.

With both Hyoungbae Lee, the Korean Studies Librarian, and Flora Kim, Metadata Operations Specialist at the EAL, away in South Korea the Library leg of the tour was given by Martin Heijdra, Director of the East Asian Library.

“The East Asian Library was happy to participate in this program, and demystify in this way East Asian Studies to a wider group of students than usually is the case, and to collaborate with the Korean Language program at Princeton University in this first outreach program to promote equity and inclusion and build partnerships with local K–12 Korean-language programs,” said Heijdra.

“More such days will undoubtedly follow; and the EAL will be glad to participate, both because supporting activities of the EAS department and its faculty is central to its mission, and because this democratizing outreach itself fits squarely in PUL’s mission, vision and North Star statements.”

The students were shown a variety of items in the East Asian Library, including North Korean periodicals, a traditional pre modern Korean book in characters (Sŏkpo sangjŏl, 釋譜詳節, a Korean biography of Gautama Buddha, notable for being one of the earliest printed examples of Korea’s native hangul characters), and, as an example of Princeton’s wide collection of DVDs and Korean dramas, a set of the Tamna nŭn to ta (Tamna, the island, a 2009 South Korean television historical drama series, set in the 17th century during the European colonial expansion into the Far East.)

To show that the study of Korean at the East Asian Library is integrated in East Asia and the wider world, the students were able to see a recent rare acquisition, an early 19th century a Japanese hand-painted scroll called the Raihei Kanshi shashin 来聘韓使写真, portraits of Korean ambassadors and musicians to Japan, often an occasion for festivities and a carnival-like atmosphere. The tour also included a look at some of Princeton University Library’s databases, both on North Korea (NK Pro), as well as the new database on South Korean news (Korea Pro).