Inside the Chronicle: The Making of Greek Horizons (1946) - Derek Coventry Patmore and the History of His Literary Quarterly

The following is excerpted from the Spring/Summer 2022 issue; Volume LXXIX, No. 1.

The Making of Greek Horizons (1946): Derek Coventry Patmore and the History of His Literary Quarterly, by A.M. Genova 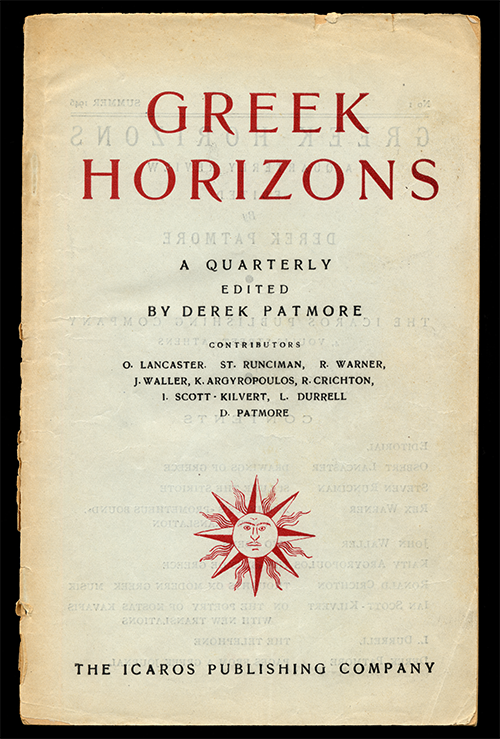 The Inspiration for “Greek Horizons”

“As a child,” Patmore wrote in his autobiography, “I was little aware of my ancestry, but I was indirectly influenced by heredity.” Having descended from a “genius” (his great-grandfather, the Victorian poet Coventry Kersey Deighton Patmore) and a “saint” (his great-aunt Emily, who was a sister of the Roman Catholic Society of the Holy Child Jesus), Derek was beholden in some ways to his family heritage, especially the impact of Coventry’s “personality,” which permeated throughout his family’s life in ways unknown to the future journalist until much later.⁶

Born in London on January 15, 1908, Derek was the son of Ethel Elizabeth “Brigit” Morrison-Scott and John Deighton Patmore.⁷ As a child, he took ancient Greek dancing lessons at the Margaret Morris School and was educated at the public preparatory school Northaw Place and the private Uppingham boarding school. He remained at Uppingham until his education was “terminated” at age seventeen, owing to the collapse of his father’s business ventures. Patmore regarded his abrupt departure from Uppingham with “a sense of relief,” but he still considered what his alternative path could have been had he remained in school. Quoting from the diary he kept during that period, he surmised the reactions of others: “Everyone appears surprised that I am leaving. I am afraid that they think that I’m a promising flower cut off before it blossoms into glory—otherwise becoming a prefect.” ⁸ Patmore’s parents separated shortly afterward, and he found himself working in insurance and then for an interior design firm on Greek Street in Soho called Marshall & Lupton, after moving with his mother to Millman Street of Bedford Row, London.⁹ Patmore went on to become a successful decorator and author. Through familial networks (his mother was a noted literary hostess) and connections he made on his own, Patmore aligned himself with prominent socialites and the literary circles of “High Bohemia.” Ultimately, Patmore found himself in places like Paris and Prohibition-era New York, along the way to becoming a war correspondent for the London News Chronicle and the Daily Mail in the Balkans and Middle East, as well as an admired author. Patmore’s publications include Portrait of My Family (1935), I Decorate My Home (1936), Invitation to Roumania (1939), Balkan Correspondent (1941), and The Life and Times of Coventry Patmore (1949).

Patmore encountered Greece for the first time in 1938 through the port of Piraeus, with an initial wave of skepticism:
“I had reached Greece at last, but at a first glance, Athens was a disappointment. It appeared noisy, and badly planned, and, except for its magnificent mountain setting, rather provincial and uninteresting. Only the Parthenon, crowning the Acropolis, lived up to my expectations. There it stood gleaming in the sunshine, a perfection of design, its marble columns golden in the light, even more lovely than I had imagined it. Then I began gradually to fall under the spell of the city.”10

Footnotes:
6 Derek Patmore, Private History: An Autobiography (London: Jonathan Cape, 1960), 14–15. An undated and incomplete typescript of the autobiography, called “The Feverish Interlude: The Autobiography of Derek Patmore,” is in Princeton’s Derek Patmore Papers, box 1, folder 2. The Coventry Patmore Collection (c0219) in Princeton’s Manuscripts Division contains more than two hundred letters written to and by the poet. Although a substantial portion of the collection was acquired by purchase in 2007, much of the material came from Derek Patmore directly, including photographs and transcripts of letters.
7 General biographical information for this section has been derived mainly from Patmore’s Private History and from his Commonplace Book, 1921–1931 (box 1, folder 5) and his undated Notebook (box 1, folder 6), both in the Derek Patmore Papers at Princeton.
8 Patmore, Private History, 34, 49, 46. About his journaling during his studies at Uppingham, Patmore wrote: “I kept a diary during these school years. The entries are naive and full of boyish pretentiousness, but gave an impression of my state of mind at the time” (43).
9 Ibid., 61–62, 73–74.
10 Ibid., 257. Access to Athens via the port of Piraeus was the standard route at that time. The initial disappointment Patmore recalled in his autobiography is absent from “The Story of My Literary Review”: “So, like so many Englishmen before me, I was enchanted with the country and its people from the moment I first landed at Piraeus in 1938. Greece did not let me down. I was fascinated by the brilliant light which seemed to tinge themarble [sic] buildings with colour, and I loved the animation of modern Greek life” (Story, 1).

Note: A.M. Genova was a Princeton University Library Research Grants Recipient in 2019-20. This article for the Chronicle is based on a set of manuscripts that were unrelated to the scope of her initial research, but that she first came across during her time in the Special Collections. The 2023-2024 application period is now open and will close at 12pm EST on January 17, 2023.