The following is the fifth in a series of inside looks at the current exhibition in Princeton University Library’s Ellen and Leonard Milberg Gallery at Firestone Library, “Records of Resistance: Documenting Global Activism 1933 to 2021.” Curated by Fernando Acosta-Rodriguez, Ellen Ambrosone, Will Clements, David Hollander, and Gabrielle Winkler, this new exhibition captures continuity and change in practices of protest and activism in diverse geographic contexts and around issues that may be particular to an area or of universal concern.

The association of Hitler with the sacred text used by Jews at the Passover seder to retell the story of the exodus from Egypt is jarring. But the title—Hagadah di Hitler or The Hitler Hagadah— is only one extraordinary feature of this document. Two other fascinating traits: the text is in the Judeo-Arabic language, an Arabic dialect written in Hebrew characters; and, also, both names printed on the cover, “Nissim Ben Shimon” and “Simon Coiffeur” are pseudonyms, and the author remains unknown. 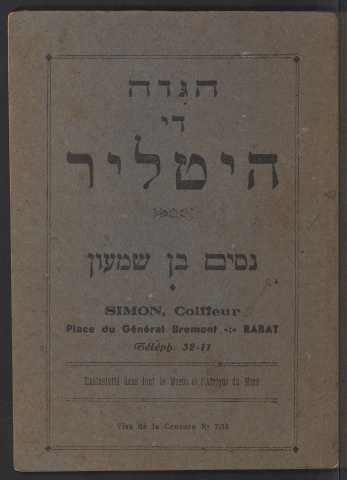 This Haggadah, is not actually a Haggadah per se. Rather this text uses the unique structure of the traditional Haggadah to tell the story of World War II, up to the time of its publication in Rabat, Morocco in 1943. Until late 1942, Morocco was occupied by Vichy France. The Allied invasion of North Africa (Operation Torch) liberated Morocco, saving the Moroccan Jewish community from destruction. The next year, anti-Jewish statutes were repealed. “The Hitler Haggadah” recounts these events and others using the unique phrasing and structure of the traditional Passover Haggadah.

For example, the traditional Haggadah contains a teaching about four sons: “The Torah refers to four sons: One wise, one wicked, one simple and one who does not know how to ask a question.”  Each son then asks a question, and the Haggadah instructions the parents how to answer each son’s question differently.

Following this formula, “The Hitler Haggadah” states: “The Torah speaks of four sons: England, the wise one, Hitler the wicked one, America the good one, and Mussolini, who isn’t worthy of our words.”1

“The Hitler Haggadah” also stands out among other documents from this exhibition for its use of satire and sarcasm. A section modeled on the Haggadah’s story about five rabbinic sages from the second century C.E. illustrates how “The Hitler Haggadah” uses such humor to play with the traditional text.

In the traditional text, these five rabbis spend the entire night discussing the exodus. They are so engrossed in their conversation all through the night, that they do not notice the dawn, and therefore that the time has arrived to say morning prayers. Their students had to come and tell them.

It happened once [on Passover] that Rabbi Eliezer, Rabbi Yehoshua, Rabbi Elazar ben Azariah, Rabbi Akiva and Rabbi Tarfon were reclining in Bnei Brak and were telling the story of the exodus from Egypt that whole night, until their students came and said to them, “The time of [reciting] the morning Shema has arrived.

After setting the scene, the traditional Haggadah offers the reader a glimpse into the rabbis’ discussion:

Rabbi Elazar ben Azaria said, “Behold I am like a man of seventy years and I have not merited [to understand why] the exodus from Egypt should be discussed at night until Ben Zoma explicated it:

“The Hitler Haggadah” twists this story around, at first turning the rabbis into enemies meeting at night to plan evil. Instead of starting morning prayers after their meeting, they meet their destruction:

Once upon a time, in the days of Mussolini
The Great,
Hitler and that bastard Goring,
Ribbentrop and that Italian Ciano,
Came to plan and plot,
In the course of that one night,
Until the Angels of Destruction came
And shook them, oh dear,
And threw them into dawn’s furnace.

The rabbis are then recast as the heroic Allied leaders: Franklin Roosevelt as Rabbi Elazar ben Azaria, and Churchill as Ben Zoma:

So spoke Roosevelt:
For I am like a man who’s hit seventy,
Lucky enough to remember
The ruin of Germany by air raids at night.

Until Churchill came and taught,
As it is written:
‘For ye shall remember
What the Eight Army did unto them
On their way to Egypt.’

For all your days,
And mine,
I shall remember what befell them.
All of your days, including the nights also.
And the sages say:
‘All your days,’ to bring forth the days of Russia.

Because this text was published before the war ended, the war’s ultimate outcome was unknown. It was certainly possible that Vichy France, or even the Germans could reoccupy Morocco. Perhaps this is why it is published anonymously? Still, given the mocking and satirical tone, its publication during the war was a communal act of bravery, an act of resistance during the darkest of times for the Jewish people.

An English translation and commentary on this text appears in The Hitler Haggadah: A Moroccan Jew’s Wartime Retelling of the Passover Story.

1 All translations by Adi Schnytzer and Jonnie Schnytzer.

The “Records of Resistance” exhibition will run from September 7 through December 11, 2022. It is open daily, Mon-Fri from 10 a.m. to 6 p.m., and from 11 a.m. to 6 p.m. on Saturdays and Sundays. Guided tours are available. Please note Princeton University's current visitors policy.