Inside the Milberg Gallery: Artist Activism in Pakistan – Then and Now

The following is the seventh in a series of inside looks at the current exhibition in Princeton University Library’s Ellen and Leonard Milberg Gallery at Firestone Library, “Records of Resistance: Documenting Global Activism 1933 to 2021.” Curated by Fernando Acosta-Rodriguez, Ellen Ambrosone, Will Clements, David Hollander, and Gabrielle Winkler, this new exhibition captures continuity and change in practices of protest and activism in diverse geographic contexts and around issues that may be particular to an area or of universal concern.

Most of the posters from Pakistan in the “Records of Resistance” exhibition at Princeton University Library (PUL) were crowdsourced from an open call on social media in 2020 for contributions of art for the Aurat March (Women’s March) in Lahore, Pakistan. 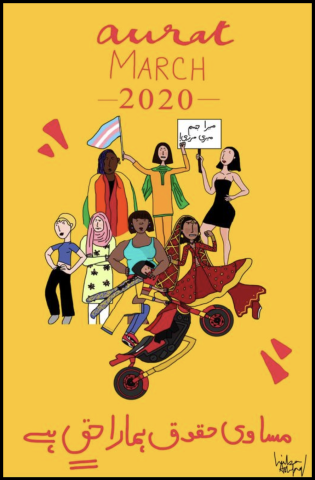 Just a week after the deadline to submit artwork had passed, a petition was filed in the Lahore High Court by Judicial Activism Council Chairman Azhar Siddique to try to prohibit the promotion of the Aurat March on social media and to regulate the protest itself. An article in Pakistani newspaper, Dawn, explained that at the hearing, Siddique claimed, “During last year’s Aurat March, women were holding placards that had objectionable messages,” and that the march was both anti-state and anti-Islam. Siddique also claimed that the promotion of the Aurat March via social media violated the Pakistan Electronic Crimes Act, 2016, and Citizen Protection (Against Online Harm) Rules, 2020.

The irony in this case is that many of the women photographed holding placards the year before in 2019 had been the targets of online harassment, bullying, and threats. Some had their photos doctored and circulated on the web. Others were the recipients of abusive comments. Still others received threats of violence including rape. Those who chose to submit their art for the 2020 march did so having witnessed the controversy of the prior year and likely with an awareness of anticipatory backlash for 2020. 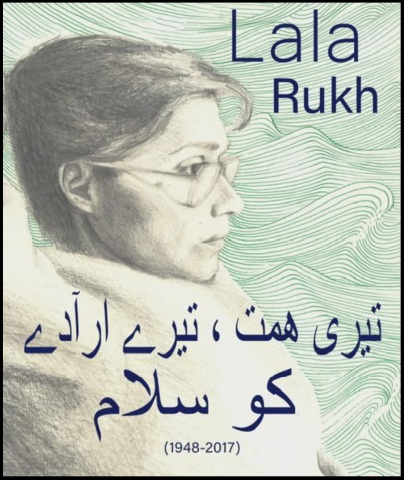 The posters on display in the exhibit are a small subset of the larger collection of posters available via PUL’s digital South Asian Ephemera Collection. Among the posters in the larger collection is one paying homage to an artist activist from an earlier time, Lala Rukh (1948-2017). The front of the poster shows the image of Lala Rukh and says, “تیری همت تیرے ارآدے کو سلام /Terī himmat tere irāde ko salām” - Salaam to your courage and your will. Lala Rukh was a founding member of the Women’s Action Forum (WAF) or Khawateen Mahaz-e-Amal, a group that formed in 1981 to lobby for women’s rights. The group initially formed in response to the first conviction under the Hudood Ordinances of 1979. These were a set of laws that were enacted under the military regime of Muhammad Zia-ul-Haq that added new offenses to the Pakistan penal code, including those related to unlawful sexual intercourse (zina).

The history of the birth of the WAF, its relationship to the laws enacted during Muhammad Zia-ul-Haq’s administration, and the WAF’s practices of protest are detailed in a digital exhibit hosted by the Lahore University of Management Sciences (LUMS). Students participating in the course “Walking in the City: Mapping Everyday Life in Lahore” crafted the exhibit under the supervision of Dr. Ali Usman Qasmi. Capturing photographs, newspaper clippings, recordings, and posters from protests during the 1980s, the students have highlighted the work of artist activist Lala Rukh, who taught at Lahore’s National College of Arts.

The LUMS digital exhibit and its focus on artist activism during the 1980s provides researchers with the critical historical background to the artist activism that is captured in the more recent Aurat March posters in “Records of Resistance.” The artists that created posters for the Aurat March have harnessed the power of social media to spread awareness regarding agitation for women’s rights in Pakistan, yet they follow in the footsteps of artist activists before them who also risked their safety and well-being to advocate for change. In addition to the tribute to Lala Rukh, researchers will notice among the Aurat March posters that there are references to other activists and artists throughout, including Malala Yousafzai, Kishwar Naheed, Tahira Abdullah, and more.

The “Records of Resistance” exhibition will run from September 7 through December 11, 2022. It is open daily, Mon-Fri from 10 a.m. to 6 p.m., and from 11 a.m. to 6 p.m. on Saturdays and Sundays. Guided tours are available. Please note Princeton University's current visitors policy.