Uncovering the secrets of PUL items through spectral imaging 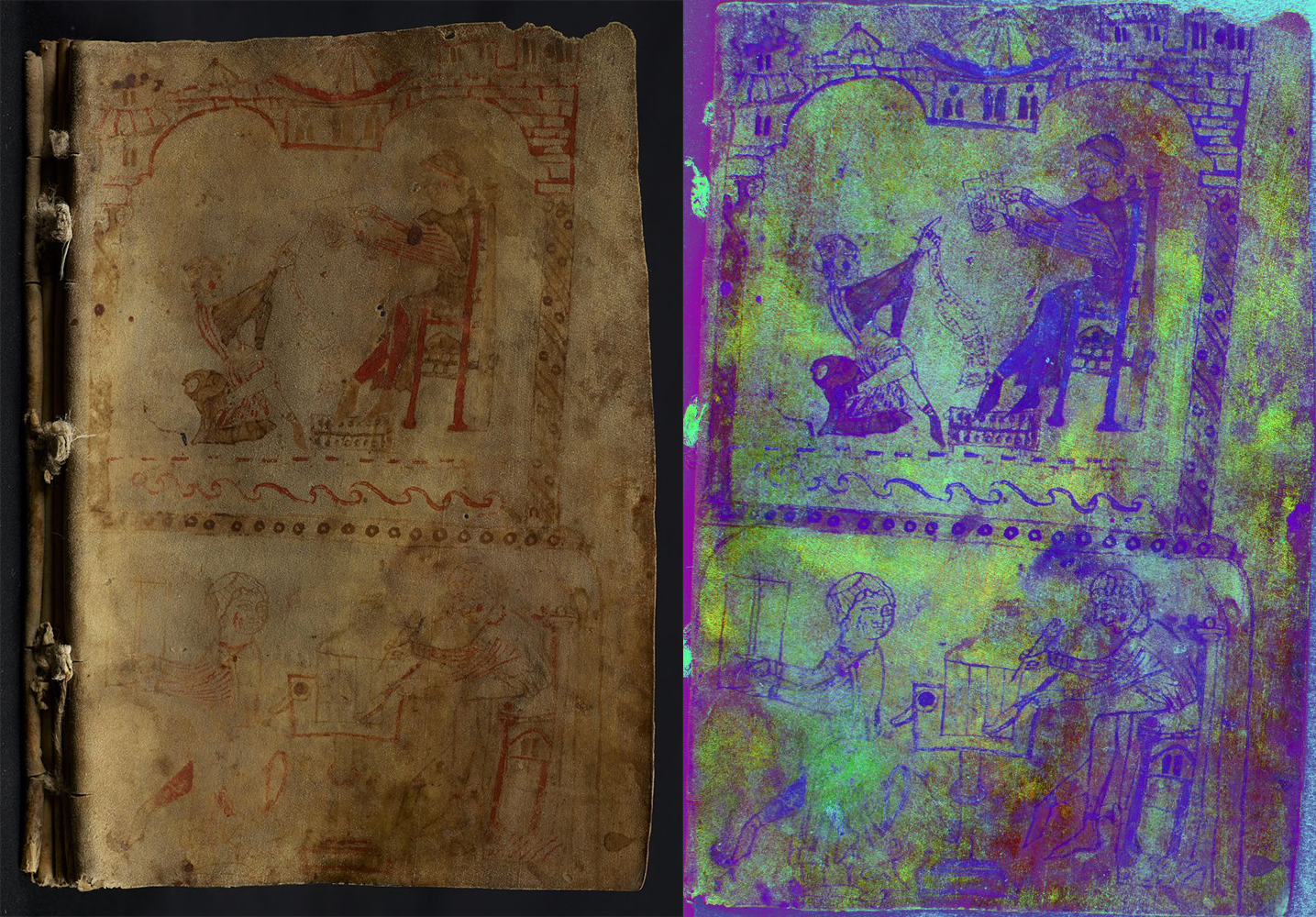 When you finish reading a book, what’s left? Perhaps you skim the afterword, epilogue, or maybe peruse the references for similar titles. Usually, the next course of action is to find another book and start the cycle all over again.

But what if you could glean more meaning from the text by reading between the lines? While there might not be much hidden between the pages of the latest George R. R. Martin novel, at least with historical texts, there is more than meets the eye.

For a week in June 2022, Toth visited Princeton University Library (PUL) to dissect items from its collection via spectral imaging. Essentially, by photographing the items under various wavelengths of light, Toth can illuminate text and markings that were previously invisible to the naked eye. These items are known as palimpsests, or manuscripts that have had their writing effaced and replaced. 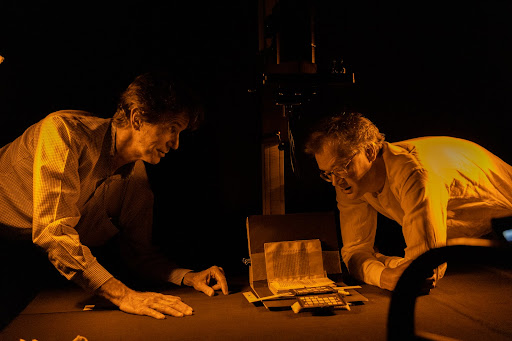 Operating under R.B. Toth Associates, a company founded by Toth’s father, Robert, in 1981, the company originally offered strategic services to the worldwide standardization and certification communities. Now, the business revolves around the younger Toth taking his spectral imaging equipment to cultural institutions around the world to support research and digitization efforts.

“I worked for the government for 28 years on the national security applications of satellites,” Toth said. “During my tenure there I met William Noel at the Walters Art Museum [in Baltimore], and he had an item on loan called the Archimedes Palimpsest.”

Between 1999 and 2012,  Noel, now the John T. Maltsberger III ’55 Associate University Librarian for Rare Books and Special Collections at PUL,  worked with Toth on an international project to retrieve the palimpsested texts in this privately owned book.  It involved conservators, philologists, imagers, and scientists from around the globe. “As well as gaining new readings for the Greek mathematician Archimedes, which themselves resulted in a scholarly reappraisal of his contributions to calculus and the concept of infinity, we discovered entirely new texts from the ancient world, including lost speeches by the attic orator Hyperides,” Noel explained.

Following their discoveries within the palimpsest, which included Archimedes’ foray into early combinatorics, Toth retired from the government and pursued a new career of spectrally imaging cultural heritage items at sites around the world..

In the two decades that Toth has been imaging items, he’s visited some of the world’s most renowned locations — the Vatican, St. Katherine’s Monastery, Egypt, — and studied items as varied as Abraham Lincoln’s handwritten draft of the Gettysburg address and a lunar visor that spent time on the moon. 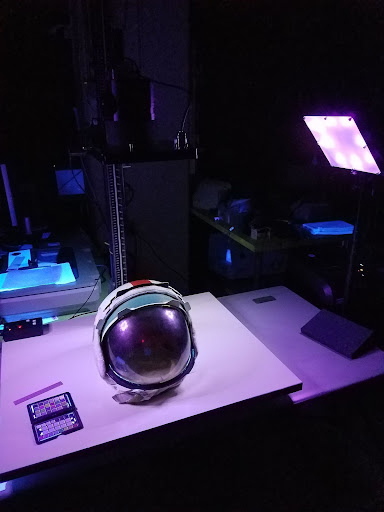 Toth’s visit to PUL, however, was loosely defined by examining items from three eras: ancient, medieval, and modern. In keeping with the Library and Toth’s commitment to accessible data, the images were promptly cataloged and made freely available on the Library’s website.

Toth, who set up shop in the Library’s Digital Imaging Studio, imaged approximately 25 folios of the Garrett Ms. 24, a 10th century Greek palimpsest gifted to PUL in 1942. He identified that the most recent ancient Georgian text sat upon an additional set of undertexts dated between the sixth and ninth centuries in ancient Greek.

“This is a historic palimpsest that scholars have been trying to study for years,” Toth said. “There have been papers and catalogs on it, but no one has really been able to see what is underneath it."

The medieval era was best captured through images of the Elucidarium, a theological work by Honorius of Autun, written in Germany in the early 12th century. The work begins with a portrait of the author in a dialogue with his pupil.

“After multispectral imaging of the manuscript, which was possibly written in the lifetime of Honorius, and now lives in the Cotsen Children’s Library Collection, it is easy to see what is written in the speech scroll – the first question that the pupil has for the master in the text,” said Noel.

The Latin, which reads, “Dicitur quod nemo sciat quid sit deus (et valde videtur absurdum adorare quod nesciamus),” translates to the pupil questioning the worship of God. “It is said that no one knows what God is (and it seems very absurd to worship what we do not know).”

An 1836 copy of John Milton’s “Paradise Lost” was also found to harbor handwritten text beneath its printed pages. The version imaged by Toth was previously owned by novelist Herman Melville. Melville made notes in the book, but these were subsequently erased by a later owner.  Toth’s multispectral images vastly increase their legibility.

Despite identifying so many secrets within the Library’s texts, much of Toth’s week at PUL was spent in the dark. His imaging system, which takes individual photos of items sequentially under various wavelengths of light, needs to operate in total darkness. The stray beam of light from behind a window shutter or rogue flicker of a cell phone could compromise the image sequence and require starting from the beginning.

Most spaces in PUL would be ill-suited to Toth’s line of work, with their gaping windows flooding rooms with light. The Digital Imaging Studio (DIS), however, befitted the job of hosting Toth and his equipment.

The camera system, a Phase One iXG Camera with a 100 megapixel sensor, that would usually accompany Toth on his travels is the exact model used by the Imaging Studio, explained Roel Muñoz.

“Our studio environment is ideally suited to this work,” Muñoz said. The DIS room Toth operated in was not only windowless, but it houses one of the larger setups in the lab, providing Toth the space to photograph everything from books to large maps.

Though Toth imaged about 110 pages spanning 30 items during his week at PUL, he was quick to mention the opportunities available upon his return.

“In what other collection could we put the same page from two different Gutenberg [bibles] in the same scene, under the same light, with the same camera, so we could compare those inks, typefaces, and paper?” Toth asked. In pulling from the East Asian Library collection, Toth was also able to compare texts across cultural and geographic lines.

“And we’re just scratching the surface of what’s available here at the Princeton University Library.”