Pirates of the East China Sea

In the waning years of the Yuan dynasty (1279-1368), wokou (Japanese pirates) raided the coastal provinces of eastern China with increasing regularity.  Despite suffering defeat in Shandong in 1363, raiding parties continued, pushing even farther south along the coast to Fujian Province.  The early Ming dynasty stance toward foreign trade was strongly protectionist; the Maritime Prohibition issued by the founding Hongwu Emperor required that contact be restricted to diplomatic embassies and trade missions.  Official tribute missions proved too limited to satisfy actual trade demands, which, in conjunction with a significant attrition in naval and guard units in the following century, sparked a boom in illicit trade and smuggling.  By the mid-sixteenth century, the Ming had again strengthened its navy and rebuilt coastal and island fortresses, yet a 1540 Ming crackdown on piracy had the adverse effect of turning the pirates into units that were larger, more closely-knit, and more violent.  A 1567 easing of trade restrictions on overseas commerce allowed Chinese merchants to travel abroad, except to Japan, which was yet deemed to be too friendly to pirates.  As the most lucrative exchange was with Japan, Chinese traders sought ways around this problem: Chinese merchant concerns continued to sail illegally to Japan; they met Japanese traders elsewhere, primarily in South and Southeast Asia, especially in Taiwan; and they traded through European intermediaries. 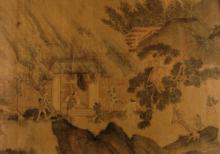 Pirates looting and setting fire to a residence

A title slip on the original painting, Ming Qiu Shizhou Taiwan zoukai tu 明仇十州台灣奏凱圖 (Victory in Taiwan by Qiu Shizhou [Qiu Ying] of the Ming), which is not reproduced in the facsimile, attributed the scroll to the Ming dynasty professional painter Qiu Ying 仇英 (1494- ca. 1559) and refers to the early Qing dynasty victory over Ming loyalists in Taiwan.  The attribution is considered spurious for stylistic and historical anachronisms; this scroll was likely produced in the late Ming or early Qing, circa the early seventeenth century, by a painter working roughly in the Qiu Ying tradition, which is characterized by fine-line, delicate renderings of figures and architectural settings.  The scroll in its entirety shows a party of Japanese pirates landing in a coastal community, scouting and raiding local residences, the flight of refugees, and the response of Ming troops who defend the area in a pitched battle on the water.