In this lavishly produced woodblock-printed “picture book” from the beginning of Utamaro’s career, pictures of insects, plants, and reptiles are paired with similarly themed and humorously risqué love poems. While many people are familiar with Utamaro’s later woodblock prints of bold beautiful women, few are aware of his early work as a book illustrator for the famous Edo publisher, Tsutaya Jūzaburō. Ehon mushi erami is one of their most celebrated collaborations. 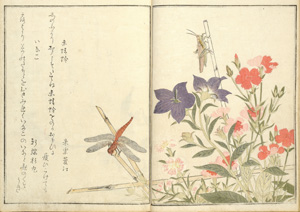 The popularity of Ehon mushi erami is made apparent by the many editions printed into the early 20th-century (see below). Our copy is believed to be the second printing of the first edition (which is also dated to 1788 and probably published a few months later). In the second printing, a few modifications were made: colors were slightly changed from those of the first printing, a few flourishes were added to the design, and the original two volumes were bound as a single book. Instead of the printed ‘seven treasure and Chinese bellflower-patterned’ covers of the first printing, our cover is hand-painted with tiered spits of landscape covered in flowers and plants. It has been suggested that the color may have been tweaked a bit at Utamaro’s prompting (and that he himself may have painted the cover) but the reason for the changes made between the contemporaneous editions is unknown. Typically, though, modifications made were economically motivated—to better appeal to the audience in hopes of selling more books. This copy may therefore have been perceived as a slight improvement on the original. 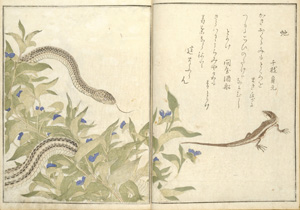 In this letter I am sending,
on a coiled roll of paper,
I let out all my pent-up
feelings, so it stretches on
as long as a slithery snake.

Utamaro, like other artists of this period, was influenced by the almost scientific naturalism of Dutch painting (ranga). His motifs, with details like the sectioned wings of the dragonfly, the hairy legs of the cicada, the silk on an ear of corn, and the scales of the rat snake, are almost microscopic in their detail. They are riveting images on subtly-colored backgrounds of delicate flowers, fruits, and vegetables. Moreover, flaunting the sumptuary laws of the period for which the publisher was later jailed, Marquand’s copy of Ehon mushi erami still glitters with the mica highlighting of insect wings and reptile bodies.

In his postscript to Ehon mushi erami, Utamaro’s teacher, the artist Toriyama Sekien (1712-1788) declares that Utamaro has succeeded in capturing the life’s breath of insects. Over two hundred years later, they live on in this beautiful woodblock-printed book.

The Ehon mushi erami of 1788 was so popular in Japan that new editions continued to be printed throughout the late 18th, 19th, and early 20th centuries. Marquand Library has also recently acquired a very rare copy of the 1892 edition, published with the new title: Mushirui gafu, by Tokyo publisher, Ōkura Magobei. 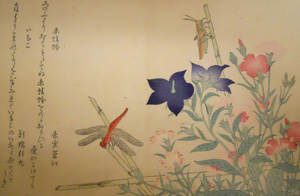 The change in title may reflect the fact that this edition is a new production. It is not a reprinting from the original woodblocks; new blocks were carved from Utamaro’s original designs by the well known late 19th-century blockcutter, Umezawa Minokichi. As can be seen in a comparison of the plates from the two volumes, Minokichi has done an admirable job of recreating Utamaro’s creatures, but the motifs are less delicate and lack the dynamic qualities of the originals. The color palette has also changed. It has been tweaked to more accurately reflect a 19th century taste for brighter hues. In what must have been an expensive production, publisher Ōkura Magobei has also attempted to recreate the magic of Utamaro’s images by again using the sparkling mica powder to highlight both the slick and gossamer body parts of the reptiles and bugs. 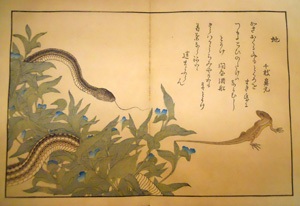 In this later edition of Ehon mushi erami, the preface and postscript have been replaced with a table of contents. Perhaps a description of the circumstance surrounding the writing of the poems, and the words of a teacher extolling Utamaro’s talent were not relevant to the 19th-century book-buying public. It was really the content that was important, a tour de force of text and image that had delighted audiences for over a century.