Otani Son’yū, Tōkaidō gojūsantsugi emaki: Numazu (Post station #13) From its source in the Amagi Mountains, the Kano River (Kanogawa) flows through Numazu and empties into Suruga Bay. The wooden bridge spanning the river is at the center of this view of Numazu. Here we see farmers, one with a horse-drawn wagon, and two others with a hand-carrier, taking rice to the mill on the opposite side of the river. (The mill’s waterwheel can be seen to the left of the bridge on the far shore.) Sonyū, however, makes it clear to viewers that they will follow a different path. The pine tree-lined Tōkaidō beckons at the left of the scene, leading onward to Hara.

Written and visual material related to the Tōkaidō has been collected by Princeton University Libraries for almost a century (see: http://pudl.princeton.edu/collections/pudl0052 to view the digitized collection), and recently Marquand Library acquired an exciting new publication related to this artistic and literary tradition.

Scrolls of the Fifty-three Stations of the Tōkaidō dates to the early 20th-century. Published by Nihon Taikansha, it is a lavishly printed set of handscrolls based on and derived from paintings of the Tōkaidō Road by Kyoto artists Ōtani Son’yū (1885-1939) and Iguchi Kashū (1880-1930).Our set appears to be one of four still in existence, leaving scholars to speculate that most were lost in the Kantō earthquake of 1923.

It was in 1919 that Son’yū and Kashū, inspired by woodblock prints of the Fifty-three Stations of the Tōkaidō Road designed by Andō Hiroshige almost a century earlier, traveled the length of the highway and collaborated on a series of “modern” paintings of its legendary post stations. These post stations (shuku), which had been officially established at 2.5 mile intervals, offered food, lodging, and other accommodations to travelers. Each of the fifty-three stops had its own unique character which, by the early 20th century, had become part of the Tōkaidō legend and its imagery.

Otani Son’yū, Tōkaidō gojūsantsugi emaki: Akasaka (Post station #36) A “storehouse of whores” was the description of Akasaka documented by Engelbert Kaempfer (1661-1716), the German physician and naturalist famous for introducing Japan to the West with the publication of his History of Japan in the early 18th-century. Noting the “great supply of dressed up strumpets” it was a description with which he whole-heartedly agreed. In reality, though, it was the business of prostitution that allowed such a remote, otherwise impoverished locality to survive. Kaempfer, who traveled the Tōkaidō during his two year visit to Japan, also gives his readers some sense of the landscape depicted by Son’yū in this scene. He tells us that Akasaka “consists mainly of a long built-up street,” and that is what we see here nestled between the tall pines that line the Tōkaidō Road.

Son’yū and Kashū’s impressionistic landscape paintings were mounted as a series of eight handscrolls to become part of a tradition of art and literature that had celebrated the highway for over three centuries. In their depiction of the Tōkaidō, however, the great road had changed greatly from those of Hiroshige and his contemporaries. Gas lamps now lit the night and automobiles and figures in Western clothing appeared. By combining these elements of the modern world with the traditional artistic conventions of the past Son’yū and Kashū created a new vision of the Tōkaidō Road.

Otani Son’yū, Tōkaidō gojūsantsugi emaki: Nihonbashi (Tokyo) There is no place in the printed scrolls where the unprinted collotype image is more effectively used than in night scenes along the Tōkaidō. In this, the opening scene of Tōkaidō gojūsantsugi emaki, it is late evening at the Nihonbashi Bridge in Tokyo. The mist has rolled in and softens the contours of the motif and the edges of the composition. Dawn will break in the following scene of Shinagawa and pale color will emerge from the mist, but at this moment it still dark. Night is achieved through the use of the collotype print alone here. The only color that has been added is the gold that illuminates the gas lamps, building windows, automobile headlights and trolley interiors.

In 1922, Kyoto publisher Nakamura Taikan decided to publish Sonyū and Kashū’s Tōkaidō gojūsantsugi emaki [Scrolls of the 53 Stations of the Tōkaidō] paintings as a limited luxury edition of printed handscrolls for his elite clientele. His publishing house spared no expense in the production of these scrolls. They not only used the finest materials—rich mineral colors and gold—but paid for innovation by hiring Motohashi Sadajirō, a Tokyo printer well versed in both traditional and modern printing methods. As can be seen in the illustrations, using a technique that fused Japanese woodblock-printing with collotype, the cutting-edge photographic process of the era, Sadajirō was able to mechanically reproduce the paintings with striking painterly effects.

Sadajirō began with black and white collotype images of the original paintings, which became what might be called the “underpainting” of the composition. In traditional Japanese fashion color was then woodblock-printed onto the surface of these monochrome images. Because the carved blocks were created from the collotype, the rich colors were perfectly registered. There is an almost seamless fusion of the color and photograph, which has an ink painting-like quality where it peeks through in these compositions. As can be seen in the scene of Nihonbashi above, the light effects of daybreak, dusk, and nighttime, are also skillfully created through the color to collotype ratio. The technique, like the subject matter, was a harmonization of old and new: the best of traditional and modern Japan.

It is interesting that, although the original paintings depicted Sonyū and Kashū’s journey from Kyoto to Tokyo, Nakamura decided to follow the 19th century literary and artistic tradition to publish his printed version of Tōkaidō gojūsantsugi emaki with its scenes organized in the opposite direction: from Tokyo to Kyoto. In the publication information at the end of the eighth scroll, Nakamura explains his decision, apologizing to viewers that might question his judgment.

There are eight handscrolls in the Tōkaidō gojūsantsugi emaki set; they contain over 170 feet of images. Each scroll is also richly appointed with teal-colored silk brocade wrappers highlighted with flowers delineated in darker teal and gold silk thread. The titles on the wrappers are hand written on a silk film that has been affixed to a gold-leafed title slip. In addition, each scroll is tied with a tie of deep purple woven silk and has end caps (jiku) of bone. 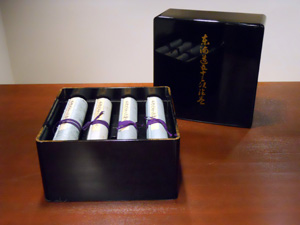 The set was issued in a black lacquer box with gold filigree designs along its edges. The cover of the box, with its rounded corners and crescent-shaped gold-edged cut-outs on two sides (for lifting it off), bears the title, Tōkaidō gojūsantsugi emaki, in bold calligraphic script. To protect the shiny lacquer surface, this box was encased in an outer box made of paulownia wood that is equipped with heavy ribbed silk cords. Publication information given at the end of the scroll informs us that the set was priced at 500 yen (approximately $5,000.00 today).

In addition to printing the paintings, Nakamura also included the four congratulatory inscriptions written for the original scrolls. Three of them are at the beginning of the first scroll. The first is by Ōtani Kōzui (1876-1948), older brother of Son’yū and highly regarded Abbot of the Nishi Honganji (temple). This is followed by inscriptions by the famous Nihonga artist, Tomioka Tessai (1836-1924), and the Zen painter Hashimoto Dokuzan (1868-1938). At the end of the eighth scroll, an inscription in English by the American anthropologist and educator, Frederick Starr (1858-1933) is reproduced in English. It aptly notes: “A great Highway is an Artery through which pulses the Life-blood of a Nation.”