An Early Study of Trajan’s Column

The triumphal column erected by the Roman senate in 113 A.D. to celebrate the victories of the emperor Trajan (died 117) over the Dacians is one of the best-preserved monuments of Imperial Rome. A key point in the architectural program of Imperial and personal propaganda planned by the emperor for his forum, the column also encompassed Trajan’s tomb, which was in its base. Apollodorus of Damascus, the architect of the forum complex, and other artists who were commissioned to record the campaign accompanied the emperor in Dacia (present-day Romania). Spiraling up the 88-foot-high column is a sculpted marble relief depicting a continuous narrative of the two campaigns with more than 2,600 figures, engaged in scenes of battle, ritual, military, and civilian life carved in minute and vivid detail. 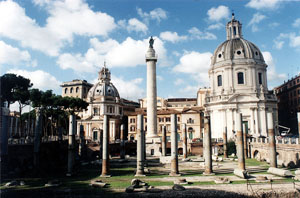 Although the column became an important source for artists and historians, viewing details of the reliefs presented obvious difficulties. The column was positioned in a courtyard between the Basilica Ulpia, a pair of libraries, and, eventually, the Temple of Trajan. These libraries would have held the emperor’s written account of the Dacian campaigns, and probably the original drawings that were later transformed into the sculpted reliefs, which would have been perused by elite visitors.

The first publication to include a full series of illustrations of the sculpted reliefs was Alfonso Chacón’s history of the wars against the Dacians. In 1569, the Brescian painter Girolamo Muziano (1532–92) had been granted permission to publish prints of the frieze,  which are thought to have been based on the drawings of Jacopo Ripanda (fl. ca. 1500–16), one of the first artists to make a close study of the column from a basket suspended from the top of the column. In this illustration, Muziano depicted Roman forces in Lower Moesia routing the Dacians’ Sarmatian allies, heavy cavalrymen in characteristic “fish-scale” armor, in the winter of 101-102. The reliefs originally incorporated metal details, such as spears, now missing, and may also have been polychrome. Many Renaissance artists, including Raphael and Guilin Romano, drew inspiration from the reliefs for their depictions of antiquity. The sculptures were also a valuable primary resource on the Dacian Wars, complementing the earliest surviving account, written more than a century later by Cassius Dior, as well as on Roman military tactics and equipment.

Alfonso Chacón, a Spanish Dominican scholar in Rome, dedicated his book to King Philip II of Spain, the self-proclaimed champion of the Church of Rome, and the ruler of a vast empire. Philip, who was attempting to crush a Protestant rebellion in the Spanish Netherlands and fight the Ottoman Turks in the Mediterranean in the 1570s, would have been flattered by the analogy to the emperor Trajan (also Spanish-born), whose victories over the enemies of the empire were celebrated by the column. A bronze statue of Trajan once stood on the top of the column, but in 1588 the pope replaced it with one of St. Peter, thus appropriating the material glory of ancient Rome for Christian Rome, while countering its pagan origins. Although now divorced entirely from its original architectural setting, the column remains a powerful symbol of the glory of Imperial Rome at its pinnacle. 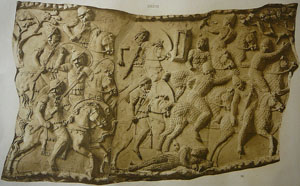 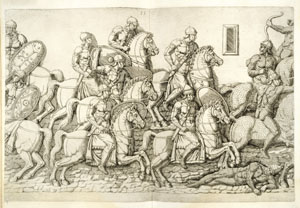 Successive generations of artists continued to reinterpret the reliefs in prints until the advent of photography changed the nature of artistic reproduction.