It is said that if one natural disaster strikes, a second will occur...

So begins the preface to this harrowing chronicle of disasters that took place in Japan during the first two years of the Ansei period (1854-1860). The era was beset with natural calamities: 4 major and many minor earthquakes, 2 tsunami, a typhoon, and flu and cholera epidemics that killed hundreds of thousands of people. The main focus here, however, is on the 1856 typhoon and resulting flood that took 10,000 lives, wiping out much of northern Edo (Tokyo) and Izu peninsula. The author, popular fiction writer-turned-journalist Kanagaki Robun, blends eyewitness accounts, religious and mythological explanations of events, and powerful images to report the tragic events of the day.

Unfortunately, almost nothing is known about the making and distribution of this three-volume set. This is because, as a discussion and depiction of “current events,” the books were unlawfully published. The subject matter of printed books and woodblock prints was strictly regulated throughout the Tokugawa period (1603-1868). Influenced by the Neo-Confucian notion that everything remained peaceful and uneventful during a virtuous reign, it was felt that there was implied criticism in the discussion or publication of anything that might be considered newsworthy. In an attempt to control the publishing industry, all books and prints issued during the Ansei era were required, as a matter of record, to have the names and addresses of the artist and publisher on them and to be approved by a government censor before publication. Non-compliance meant public handcuffing or exile. Publishers, however, often flaunted these laws with “private publications” like Ansei fūbunshū that were unsigned or signed with an alias (like Kinton Dōjin above). They do not have government seals. Just months earlier, Robun’s first chronicle focusing on the massive earthquake of 1855 (Ansei kenbunshi) had been banned by the Shogun three months after being illegally published. The artists, block cutter and printer were all required to surrender their earnings and pay steep fines. The publisher was banished from his residence. As reported in a contemporary diary (Fujioka nikki), however, Robun’s anonymity saved him from being punished, and it is therefore not surprising that there was great incentive to keep the publication details of this illustrated chronicle a secret. 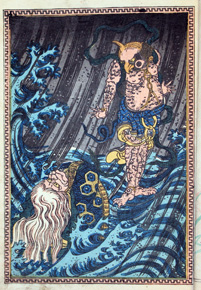 Hiren, the Chinese Wind God (volume 1) Robun ends his introduction with the warning that this image may scare children.

Following a brief preface about natural disasters, Ansei fūbunshū begins with this ominous image of the Wind God (fūjin) floating above an old woman drowning in the churning waves of his hurricane-fueled flood. It is one of the mythological elements Robun combines with factual, eye-witness accounts to describe the disasters of the Ansei period in this chronicle.

On the following page, Robun explains to the reader that this is Hiren (C: Fei Lian), the Chinese wind god described in the official dynastic history of the Jin dynasty (1115-1234). Hiren is ruler of the Winnowing Basket Constellation (Kisei) where the North Star, the place from which wind originates, resides. According to Chinese tradition, Hiren is a troublemaker who carries his destructive winds with him in a bag.

Robun’s written description of Hiren closely conforms to Chinese tradition. The deity, he explains, has the body and legs of a deer, the head of a sparrow, the tail of a snake, and skin that is patterned like a leopard. The artist who designed this print, however, depicts Hiren in his human form. He has the head of a bird, the snake’s tail, the hairy leopard-like skin, and even the bull horns that Robun has forgotten, but his body is modeled after the classic form of a Buddhist guardian figure. The chiseled torso, the distinctive hand gestures, the clothing and the scarf that flutters in the wind around him clearly suggest this prototype. It is interesting, though, that Hiren’s stance, with his legs pressed tightly together and his clawed feet angled outward does not conform to the Buddhist model. This pose is derived from contemporary woodblock print images of kabuki actors, and may give us a clue about the field in which the artist usually works. Like kabuki prints, which capture the dramatic moments of a play, this image of the malevolent figure of Hiren, framed by sheets of water raining down, the angry waves and the helpless woman below, sets the tone of the tale of destruction that is to follow.

In volume 2, we learn about the many districts of Tokyo that were flooded by the Sumida River during the typhoon. This is a view of the neighborhood of Ryōgoku after the storm, as people begin to assess the damage. The red cartouches are inscribed with the names of the different shops and businesses that have now been destroyed, giving this scene an almost documentary quality.

It is difficult to attribute the illustrations in these volumes to a single artist. The Ryerson Library of the Art Institute of Chicago reports that their copy is signed by Utagawa Yoshitsuna (act. 1850-1860’s), one of the artists fined for designing the woodblock prints for Robun’s earlier earthquake chronicle. This has therefore become the traditional attribution. One of the plates in the third volume, however, is signed Mori Mitsuchika (n.d.), an artist better known for his medical illustrations. This undoubtedly means that, like its predecessor, several artists were employed to illustrate this set of books. 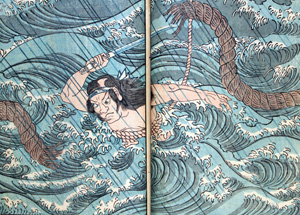 Here Robun records a personal account from a sailor who was aboard a boat that got caught in the typhoon. As the crew was managing to keep the damaged vessel afloat, the anchor cable of a much larger ship suddenly appeared before them in the water. Crashing into the heavily-weighted cable would have meant total destruction and loss of life, so the man decided to jump into the churning sea to cut the cable with his knife. He thus saved both the boat and the sailors onboard from any further harm before being pulled to safety with the rope he had tied around his waist. It is interesting that while many illustrations in Ansei fūbunshū are panoramic views of the storm’s destruction, the artist here has chosen to depict this story by focusing on one climactic moment.

In 1854 Commodore Matthew Perry forced an end to Japan’s two hundred years of self-imposed isolation and trade agreements were signed with America and then other Western countries. Many Japanese blamed the huge number of disasters during the Ansei period on the arrival of Perry’s “black ships.” The earthquakes, tsunami, and floods were interpreted as a sign that the indigenous Shinto gods (kami) were displeased with this new relationship with the West. 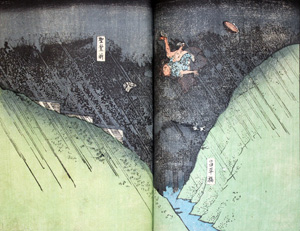 In this scene, the wind from the typhoon is so strong that a man is blown off a mountain near the Shoei Bridge in the Chiyoda section of Tokyo. The Seidō Temple is just visible in the background. This site, one of Hiroshige's famous 100 Views of Edo, was well known to a very literate Japanese audience.Seeing it manipulated by the artist in this waymust have made the visual impact of this scene all the more shocking. 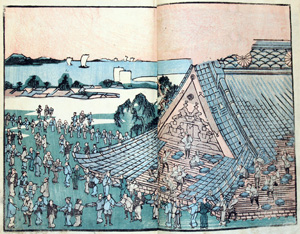 In this scene, repair of the roof has begun on the Teppōzu Inari Shrine, providing work for hundreds of men. The shrine still exists today in Tokyo.

It is interesting that there was also a perceived positive side to disasters of the Ansei period in Japan. People, who didn’t have much to begin with, began to receive charity from the government and wealthy merchants. Carpenters, blacksmiths, and other craftsmen profited greatly from the reconstruction of Edo and its environs. In later years, the destruction caused by the Ansei disasters was described as means to begin anew, to set the wheels in motion for the restoration of imperial rule in 1868, and to bring Japan into the modern age.