This year, Marquand Library acquired a copy of one of the first complete color facsimiles of the Grimani Breviary, a magnificent example of Flemish Renaissance manuscript illumination.  Monumental in size, it consists of 1,670 pages, of which around 120 are full-page miniatures of both sacred and secular subjects, including a calendar, psalms, hymns, texts from the holy scriptures, and prayers for the canonical hours of the day. Purchased around 1520 by the Venetian Cardinal Domenico Grimani (1461–1523) for the enormous sum of 500 ducats, the prayer book was considered so precious that the cardinal specified in his will that this “noble and beautiful object” was to be shown only to “people of extraordinary standing and only in exceptional circumstances” (quod Breviarium, tanquam rem nobilissimam et pulcherrimam, ostendere debeat personis honorificis, quandocunque oportunum fuerit). Grimani further ensured that this luxurious devotional book would never be sold, and it was left in testamentary trust to the Republic of Venice. Today it is preserved in the Biblioteca Nazionale Marciana in Venice, and is still seldom on display, for reasons of conservation. 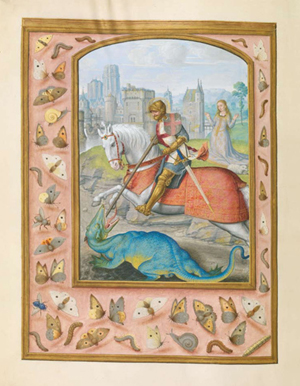 Much remains to be discovered about the origins of the breviary. It is still not certain who commissioned the work, though it is known to have been procured for the cardinal by Antonio Siciliano, who acted as the Milanese ambassador to Flanders until ca. 1513/14.  The authorship of the illumination is also still being investigated. Several different hands have been identified, and while the influence of earlier artists working in the Flemish courtly circle, such as Hugo van der Goes and Hans Memling, is evident, details of dress, iconography, and artistic style suggest that the breviary dates from the decades spanning the late fifteenth through the early sixteenth century. The quality of the work supports attribution to some of the finest Flemish miniaturists of the period, including Gerard Horenbout, Alexander and Simon Bening, and Gerard David.

This page, from the special offices of the saints, shows the warrior saint George slaying the vividly depicted dragon to save a pagan princess of Silena, Libya, according to Jacobus de Voragine’s thirteenth-century Golden Legend (Legenda aurea). The borders of this page and many others throughout the breviary are filled with exquisite trompe l’oeil depictions of natural forms—as well as precious man-made items such as jewels and luxurious textiles, characteristic of northern Renaissance art—that delighted the owners of these private devotional books. Illuminated manuscripts were an important vehicle for the transmission of new styles and iconography between northern European and Mediterranean artists. 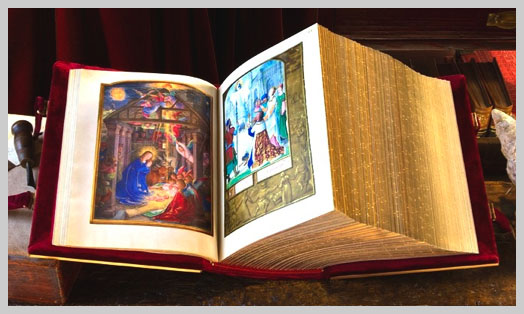 Reproductions of illuminated manuscripts have long been important research tools for art historians. As technology has become increasingly sophisticated, high-quality facsimiles of manuscripts enable researchers to study reproductions that are stunningly close to the originals. Certain manuscripts—and the Grimani Breviary is one such example—might never be made available for any but the most prominent scholars or technical experts to consult. Marquand Library is a major repository of facsimiles of important illuminated manuscripts from many cultures, and they are available for consultation in the Rare Book Room.

According to the publishers, the project to reproduce this breviary took around ten years to complete, and entailed the creation of special equipment to photograph the manuscript as accurately as possible without compromising the condition of the fragile document. The accessibility of this facsimile will enable easier comparison of this key work of Flemish manuscript illumination with other stylistically related illuminated books, facilitating exploration of such issues as attribution and interrelationships among the arts of the period. Although in recent years online digital images of manuscripts have provided another means of close examination of unique items, a facsimile in the format of a printed book offers a more tactile experience, closer to the intention of the original, and may prove more permanent than a virtual copy. 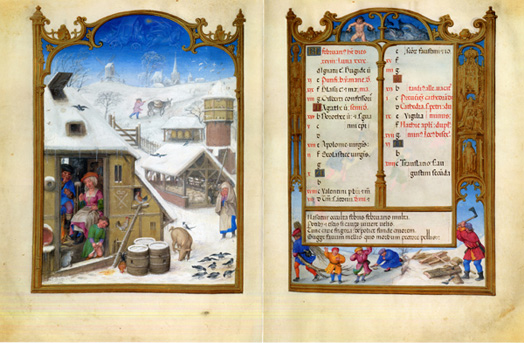 Grimani Breviary: Pages from the calendar for February

The two pages shown above depict the calendar for February. While the artist responsible for the scene on the left reveals his familiarity with the depiction of the same month in the Très riches heures of the Duke de Berry, the robust naturalism in this miniature, dating from around seventy-five years later, was striking even to contemporaries. Marcantonio Michiel, the Venetian art historian who was privileged to view the manuscript in the cardinal’s home in 1521, shortly after the breviary arrived in Venice, recorded “Especially laudable are the calendar illuminations of the twelve months and most remarkably the one of February, where a child is visible peeing on the snow, and the pee is yellow against all the white, snowy and frozen countryside.” 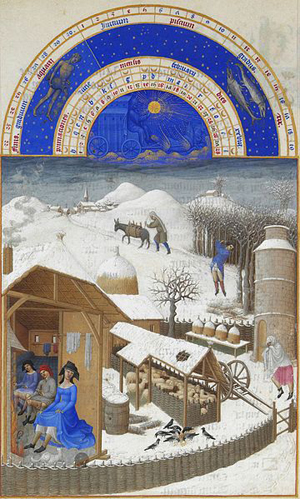 Très riches heures du duc de Berry, illuminated by the Limbourg brothers around 1413–16: The calendar for February. Original manuscript in the Bibliothèque of the Musée Condé, Chantilly, MS. 65

A recent facsimile of the Très riches heures du duc de Berry (now conserved in the Bibliothèque of the Musée Condé, Chantilly), is also in Marquand Library’s rare book collection. ND3363.B5 V555 2010q (SAX). The Très riches heures was acquired in the sixteenth century by Margaret of Austria, who was twice governor of the Habsburg Netherlands (1507-1515 and 1519-1530), and the manuscript may have been known by artists at her court there.