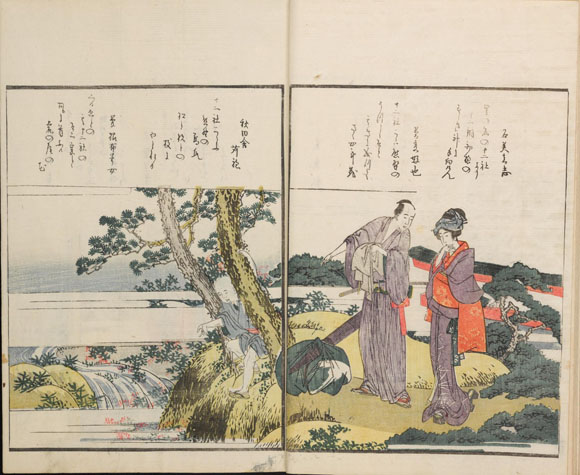 Unlike many copies of this book, Marquand’s Ehon kyōka yama mata yama retains its purple coloration throughout. This color, which is a vegetable dye, is quite elusive and has turned brown in other extant examples of the book.

Although specific locations are only hinted at in the poetry in Ehon kyōka yama mata yama, the overall setting is Yamanote [“Towards the Mountains”], a district of northeast Edo (Tokyo) that was inhabited by the military aristocracy and their families during the Edo period (1603-1868). The title Mountains upon Mountains is a satiric reference to this area which is, in reality, only slightly hilly. 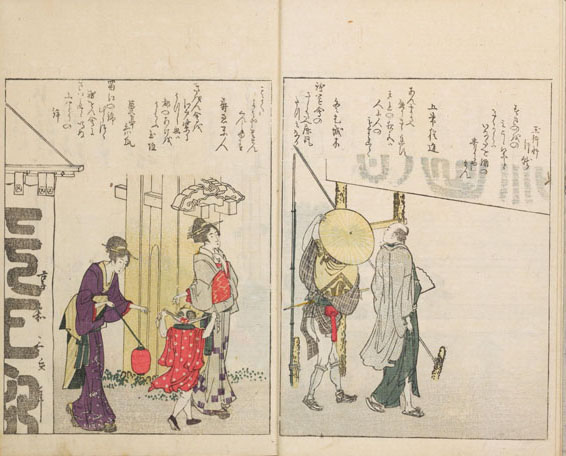 The publication date indicates that the set was published in the spring of 1804 (Kyōwa 4), but Hokusai may have designed the illustrations a year earlier. This illustration of a Gion festival celebration from the second volume features a banner on the left with the inscription “Kyōwa 3, Boar Year” or 1803.

Hokusai sold the “Sori” name to a pupil in 1802, but Ehon kyōka yama mata yama (1804) is considered a late example of what has been termed by art historians as Hokusai’s “Sori-style.” Like Itako zekkushū (see past blog entry), published two years earlier, it features the tall willowy women in elegant dress that were the hallmark of the “Sori” phase of the artist’s work. It is not surprising that the latest fashion trends were often disseminated through popular illustrated books like Ehon kyōka yama mata yama. 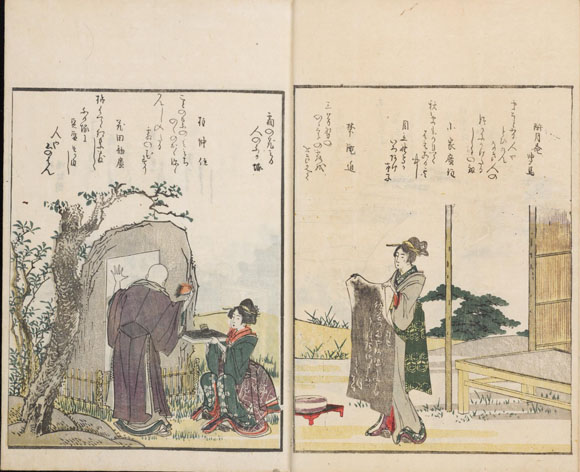 Here two women and a monk make rubbings from an inscribed stone.

Hokusai signed his work with one of two names in 1804 when this book was published: Tatsumasa and Gakyōjin. The preface indicates that the illustrations were indeed done by Gakyōjin (meaning “the man mad about drawing”). This preface, located at the beginning of the first volume, was written by Benbenkan Koryū (1756-1815), the leader of the Yamanote-ren Poetry Circle. Daigentei Sumikata selected the kyōka for the book and wrote the closing note, which appears at the end of the third volume. 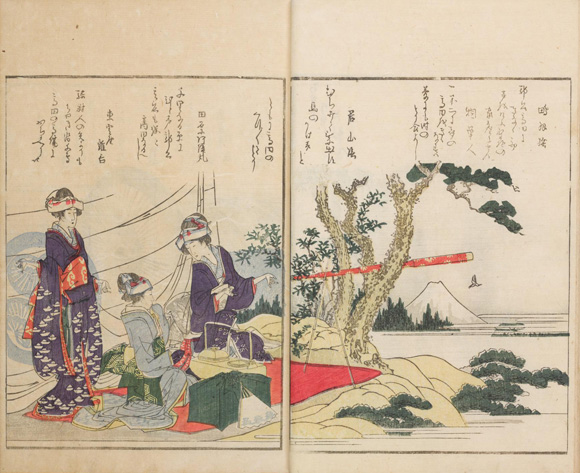 Telescopes and other Western inventions often appear in woodblock prints of this period, creating a bit of excitement through their novelty. Here, at a picnic at the Takeda Racecourse, beautiful women use the telescope to view Mount Fuji in the distance. This scene appears to foreshadow Hokusai’s unconventional designs of the mountain in the decades to come.

It will be almost thirty years before Hokusai creates his first designs featuring views of Mount Fuji, but it is in these early 19th century book illustrations that we see the first interest in place as subject matter. The focus here, however, is still on people and their activities, which are made all the more interesting with the artist’s addition of things like Western telescopes, ferocious Buddhist sculptures, and humorous peasants. 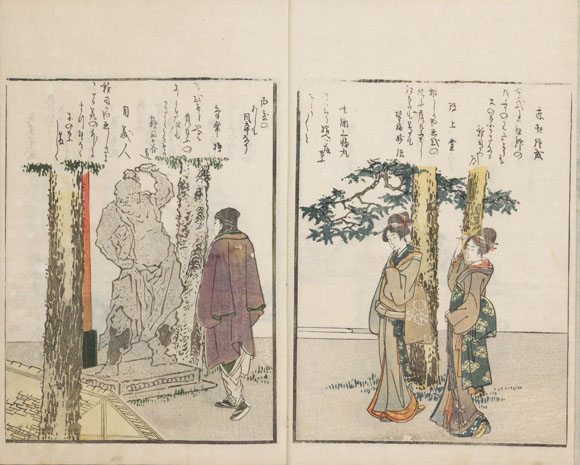 Visiting a Buddhist temple in the neighborhood of Zōshigaya, these people stop to admire the Kongo Rikishi guardian figure. This diamond thunderbolt-wielding deity would have been part of a pair (nio) at one of the gates to the temple compound. Here, Hokusai has used painterly dynamic contours to capture the rippling muscles and flowing drapery of such sculptures. 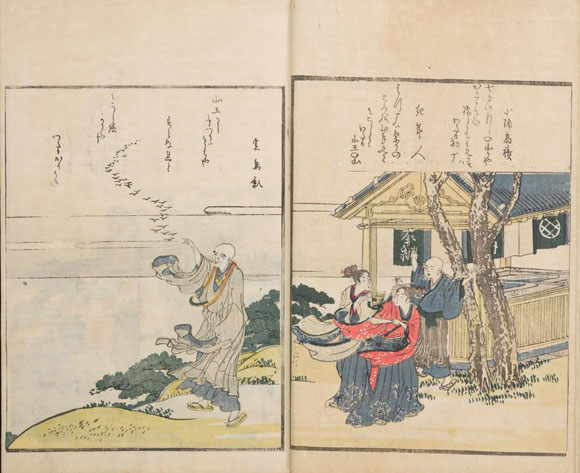 A monk points to geese descending in the distance.

The woodblocks for this book still exist. They were brought to the Netherlands in 1830 and are in the possession of the National Museum of Ethnology in Leiden.