Marquand Library is the only institution on record as owning a complete 7-issue run of the Japanese serial entitled Seikigun [世紀群 Century Group]. Published and hand-distributed in 1949 and 1950 by the artist/writer organization, Seiki no kai [The Century Association], the eclectically produced pamphlets were created as experiments in ‘total art’ (sōgō geijutsu), which was defined the group as the merging of visual art and literature to create a new form of expression. It was the hope of Seiki no Kai to inspire artistic and political discussion about Japan’s participation in World War II through the subject matter in each issue. To that end, volumes 2-7 are stamped “Research Material” (kenkyū shiryō) on the back covers. Today, these small printed volumes not only capture the artistic mood of the brief period between World War II and the Korean Conflict, but preserve for us the unknown works of some of the first non-traditional post-World War II artists and writers in Japan.

Founded in 1948, the group Seiki no Kai was largely comprised of younger members of the avant-garde collection of writers and artists known as Yoru no kai [The Night Group]. This new faction was led by the famous poet, novelist and playwright, Kōbō Abe (1924-1993), who is probably best known in the West for his 1962 novel, Woman in the Dunes (Suna no onna). Teshighara Hiroshi (1927-2001), the avant-garde filmmaker who received an Academy Award nomination for his film version of the book in 1964, was a later participant in the group. Some of its other famous members were the poet, Sekine Hiroshi, artists, Okamoto Tarō and Katsuragawa Hiroshi, the art critic, Segi Shinichi, the artist/photographer, Kitadai Shōzō, and the literary critic and journalist, Hanada Kiyoteru. 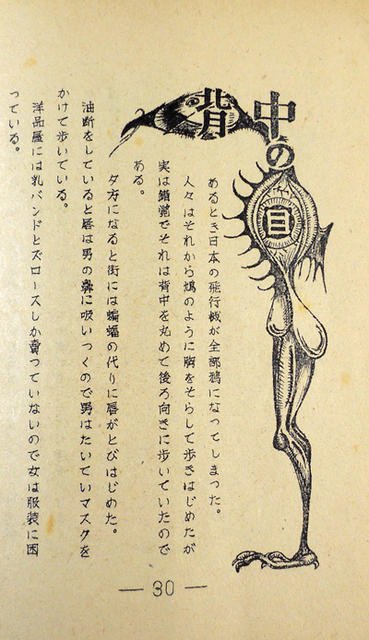 Each of the seven issues of Seikigun is unique in both design and content, but all are small and stenciled in black with some color (mostly red) in illustrations. What appear to be a few woodblock prints have also been pasted onto the cover of Volume 1 and onto pages of subsequent issues. In keeping with Seiki no Kai’s goal to democratize the creation of art, each issue was a collaborative effort with participants experimenting in areas outside their fields of specialization. So, while the texts were mostly written by the professional writers of the group, the illustrations were designed and hand-stenciled by both the artists and writers (with artist assistance). The influence of Western Surrealism and Existentialism is evident in all of the images in Seikigun. 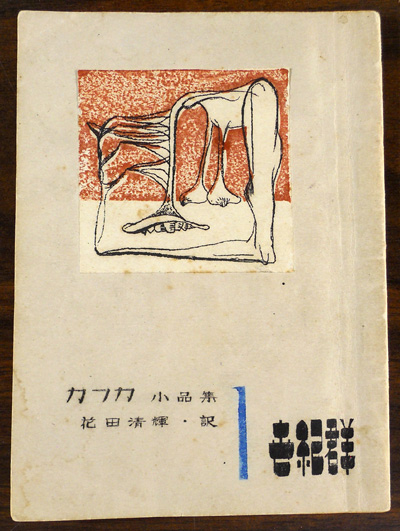 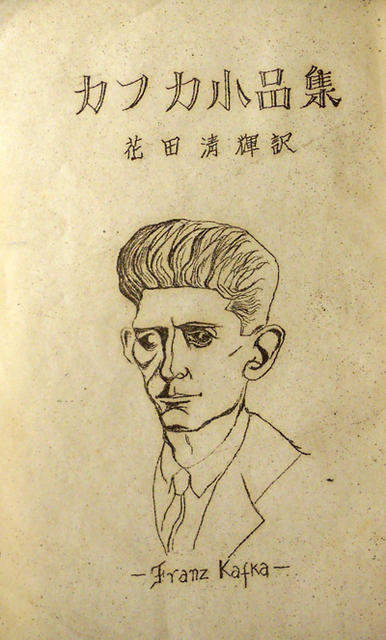 The first volume of Seikigun, Kafuka shōhinshū [“Essays/Small Works by Kafka”] features literary critic Hanada Kiyoteru’s translation of two short pieces by Franz Kafka. One of the founders of Yoru no kai, Hanada was widely considered the leader of the avant-garde movement in Japan after World War II and may have coined the phrase “total art.” Teshigahara Hiroshi is credited with conceiving the overall design of the issue and it contains two illustrations by Katsuragawa Hiroshi (see below). These, it is explained, are not illustrations of the text, but work that grew out of a group discussion about the publication. 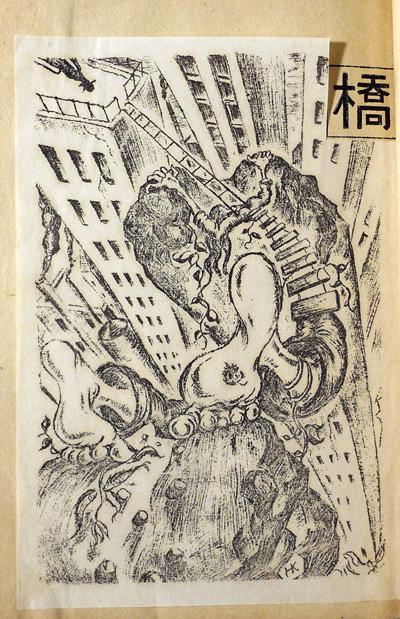 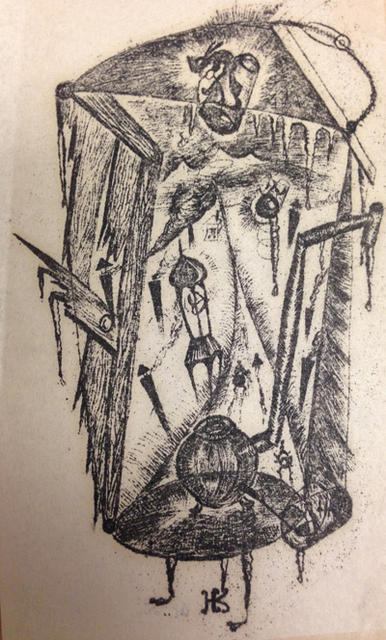 Tucked inside this first volume is a small 3-page insert written and probably illustrated by Kōbō Abe. It outlines the goals of this experiment in collaboration to create a new genre of diverse artistic expression. 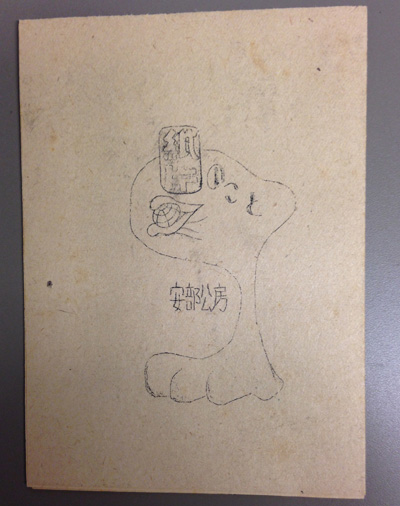 Volume 2 of Seikigun begins with an essay by Suzuki Shutarō entitled Shihen [Slip of Paper]. There are also two written vignettes and a woodblock print by Ono Seiji. 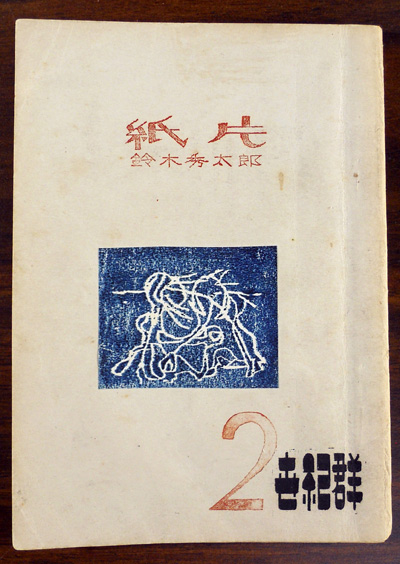 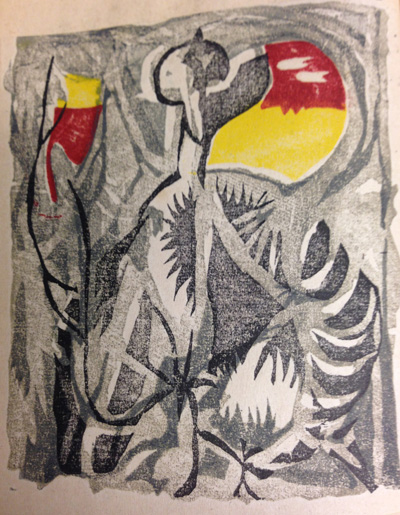 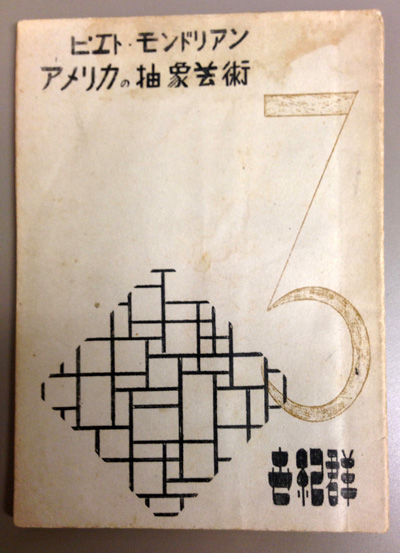 Volume 4 contains Kōbō Abe’s essay, Mahō no choku [“The Magic Chalk”], about a starving artist who find a piece of “magic” red chalk in his apartment that makes the things he draws on the walls become real. A color woodblock print by Teshigahara Hiroshi also appears in this issue. 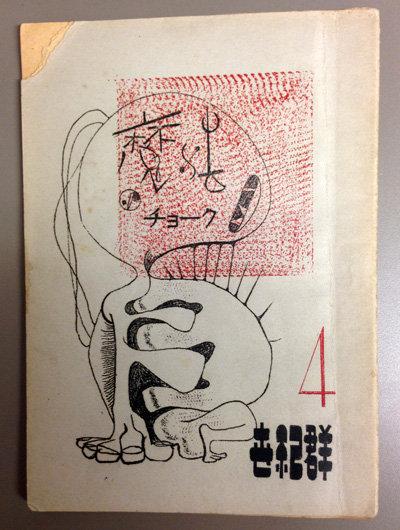 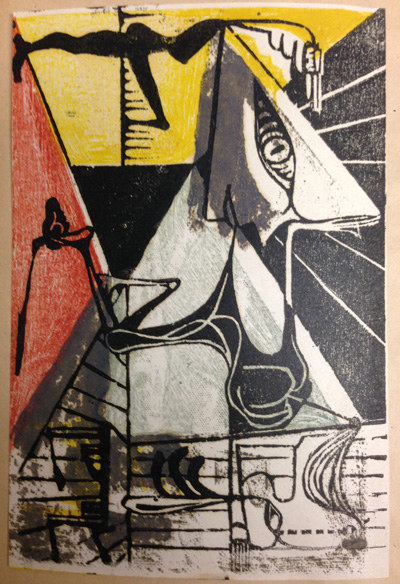 Kōbō Abe is also the author of the essay in Volume 5: Jigyō [“Enterprise”]/ Utopia], which has tipped-in plates by writers, Katsuragawa Hiroshi and Suzuki Shutarō. 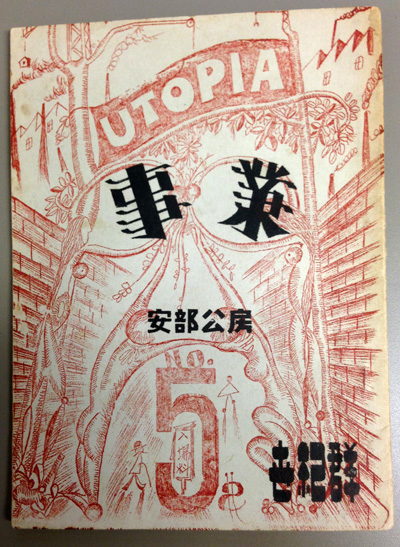 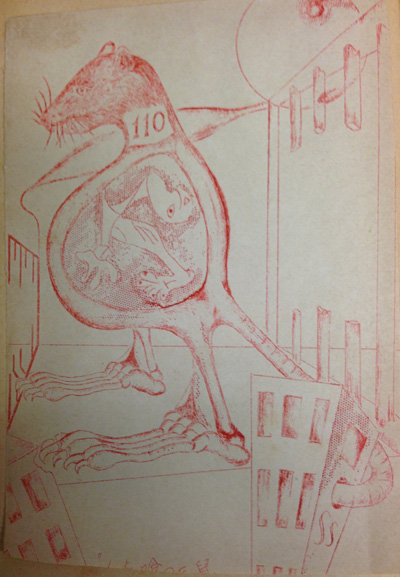 Volume 6 is comprised of Sekine Hiroshi’s Sabaku no ki [“Tree in the Desert”] and illustrations by Kōbō Abe, Teshigahara Hiroshi, Ono Seiji and Katsuragawa Hiroshi. 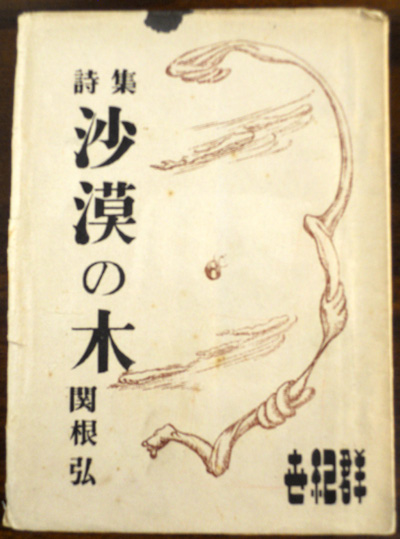 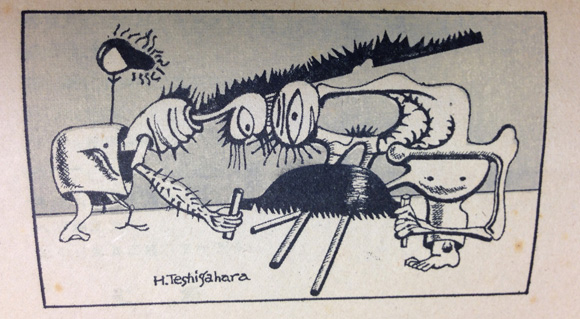 The final issue, Volume 7, contains Segi Shin’ichi’s Bungei hyoron no kadai ni tsuite, a translation of “Issues of Literary Critism” by Aleksandr Aleksandrovich. Volumes 6 and 7 are slightly larger than the other five. 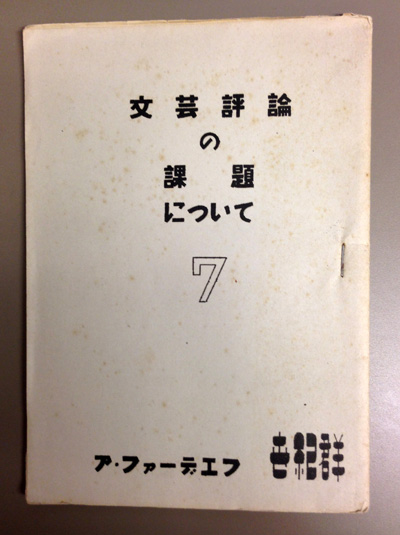 Remilitarization in Japan after the outbreak of the Korean War convinced Seiki no Kai that the essence of the avant-garde movement was to lose itself in the masses, and by 1951 the group had disbanded. It our privilege at Marquand Library to be able to preserve the collaborative work of these writers and artists who, for just a brief moment in time, helped to define the modern art movement in Japan.