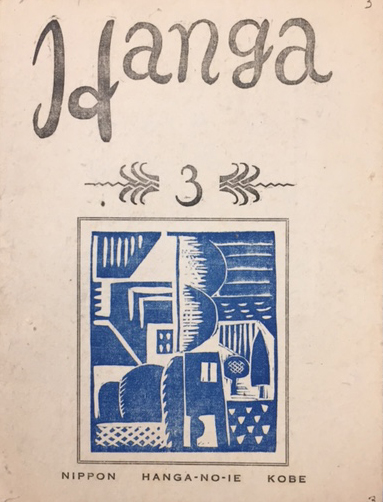 At the beginning of the 20th century, shortly after the Japanese woodblock print began to influence Western painting and decoration, modern European art and new ideas about the making of art arrived in Japan to became an inspiration for many artists there. Filtering into the country as images in newspapers, magazines and by means of artists traveling abroad, works of Art Nouveau, Impressionism and German Abstract Expressionism were to have an especially profound impact on the roughly 300-year long printmaking tradition in Japan. 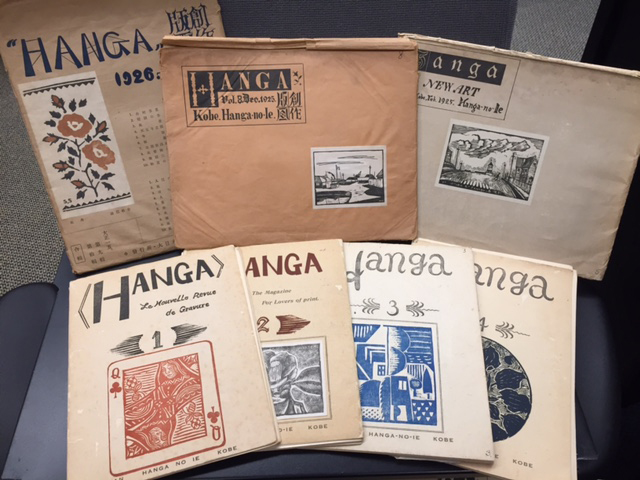 The ten extremely rare issues and supplement edition of Hanga, recently acquired by Marquand Library, showcase the early 20th century influence of Western art and ideas on Japanese printmakers who broke with the their woodblock printing tradition in pursuit of the Western concept of ‘art for art’s sake.’ Published quarterly by print shop owner, Yamaguchi Hisayoshi between 1924 and 1930, Hanga celebrates the work of these artists and, in doing so, inadvertently documents the rise of what became known in the 1920’s as the Sōsaku Hanga [“Creative Print”] Movement in Japan.

The Creative Print Movement unofficially began twenty years before Yamaguchi published the first issue of Hanga in 1924. Creative print artists of the period credited Yamamoto Kanae (1882-1946) with its founding when his 1904 print, Fisherman (Gyofu), was published in the popular literary magazine, Myōjo (1900-1908). As noted by editor, Ishii Hakutei, in an essay accompanying the print, Fisherman was revolutionary in that it was self-expressive in the manner of a painting. In other words, Kanae’s print was not a commercial workshop product like the traditional Japanese print, but reached the lofty “amateur status” of fine art. This status, creative print artists believed, could only have been achieved because Yamamoto, like the European printmakers he studied in art school, had taken control of the process to design and print the two-color Fisherman himself. 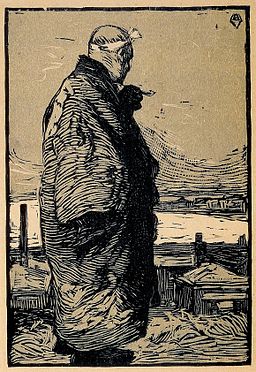 In the years between the publication of Fisherman and the first issue of Hanga Japanese audiences continued to be exposed to European paintings and prints through a number of foreign periodicals and Tokyo-based literary magazines like Myōjo and Shirakaba (1910-1923). In 1914, the avant-garde Berlin gallery, Der Sturm, organized an exhibition at the Hibiya Museum in Tokyo, which featured prints by Wassily Kandinsky, Erich Heckel, and Max Pechstein. A comparison between the prints in this exhibition (appearingin the 2006 exhibition catalog by Angela Schneider: Berlin Tokyo, Tokyo Berlin: die Kunst zweier Städte (Berlin: Nationalgalerie Staatliche Museen)) and those featured in Hanga reveals the strong influence that these European works had on Japanese print artists working in the 1920’s.

In the early years of the movement, there was little public interest in creative prints. They were said to lack the refinement of works of the Shin hanga [“New Print”] Movement, a popular contemporary incarnation of the Ukiyo-e tradition. New prints, which sold well in both Japan and the West, had fashionable Japanese subject matter and color palettes to appeal to modern print-buyers. They were a commercial product produced by professionals as a collaborative effort, with a publisher directing all aspects of production. It was the publisher who, keeping his finger on pulse of popular trends and audience response, would decide the subject matter and format. He would then hire the artist to design the print (set of prints) in ink on paper. This design was then carved into woodblocks (a separate block for each color) by a professional block cutter and printed by a trained printer.

It was this collaborative production of new prints the creative print artists rejected. Like Yamamoto Kanae, they took their inspiration from the Peintres-Graveurs of Europe who, in their first exhibition in Paris in 1889, officially broke with their own printmaking tradition of reproducing fine paintings for market to create original printed works of art (graveur originale). The Creative Print Movement embraced their Western ideals of self-expression and extolled the concept of the artist as sole creator. They shunned the commercial production of new prints and took control of the entire printmaking process, conceiving the original design, carving the block and printing the print. They created 'art for art's sake.'

The publication of Hanga, was part of Yamaguchi Hisayoshi’s effort to create a market for the creative print. Each quarter, subscribers received a portfolio of original woodblock prints (and occasional lithographs and reproductions) by the best creative print artists of the era. In the first four issues, the prints are tucked into a folio with a hand-printed cover designed by an artist from the group. From the fifth issue, onward, the prints were distributed in ornately printed envelopes affixed with an original print or reproduction. 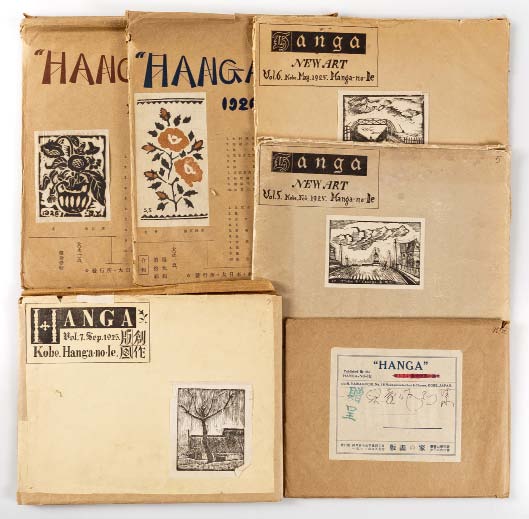 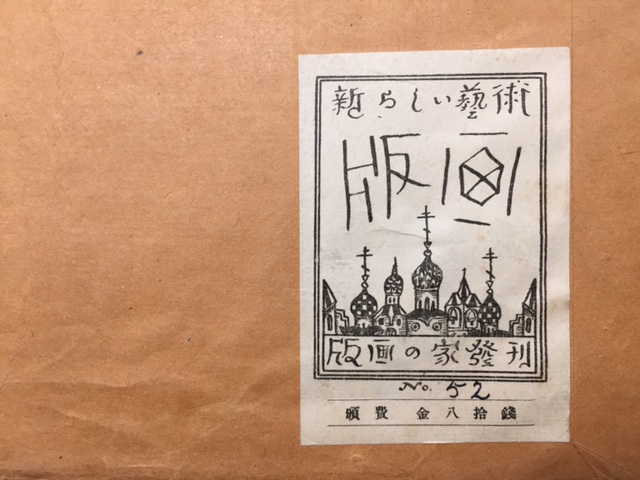 Small print pasted to the back of each envelope, which also indicates this issue's print number in the publication run of what is believed to be 300 issues.

Although, as owner of a print shop, Yamaguchi’s motives may have been self-serving, he was a key figure in helping to keep the struggling Creative Print Movement alive. He did this not only through the publication of Hanga but also by creating an exclusive club-like atmosphere for his subscribers. They, as part of his “Society,” were deemed to be those sophisticated enough to appreciate artistic innovation. In most issues there was a printed declaration, written both English and Japanese that described his print shop at an “Institute,” called the House of Prints (Hanga-no-Ie). The goal of this Institute “lay (sic) in the protection and encouragement of original woodcut prints through direct or indirect means.” Anyone subscribing to Hanga would be “enlisted as a member” in this cause and registered as such. Overall, there are believed to have been around 300 member/ subscribers to the quarterly serial. They received printed folios and, in later years, decorated envelopes of original prints by the best creative print artists of the day. 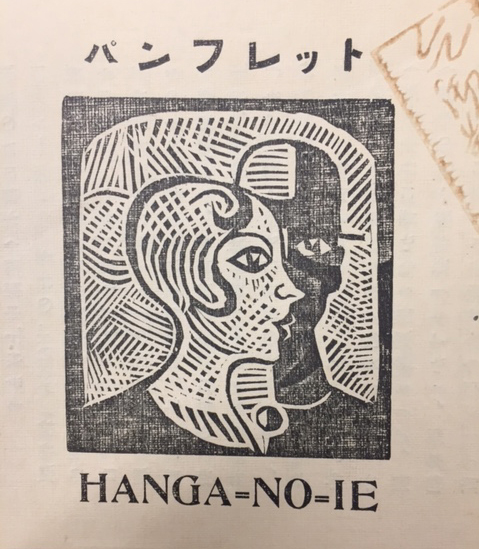 This small pamphlet, printed with Yamaguchi’s declaration, was included in the first issue.

It was only through periodicals like Hanga that Sōsaku Hanga artists’ works were disseminated and ultimately preserved until the 1960’s when the genius of Japanese “creative prints” was finally realized. As a world-wide phenomenon in the latter part of the 20th century, these early experiments in printmaking went on to have a huge impact on the international art scene.