1754: A Celebration of Medieval Mantles

Two of the most famous surviving medieval ceremonial mantles, the so-called “Star Mantle” of the Holy Roman Emperor Henry II and the Coronation Mantle of the Kings of Hungary, both embroidered in the early eleventh century, are the subjects of monographs published in the same year – 1754 – by different authors. Copies of both books, written more than seven hundred years after the mantles were made, were on display in Marquand Library from late November 2016 until mid-March 2017.

While the title of Schütz’s book describes its subject as the Bamberg mantle (mantum) of the saint and Holy Roman Emperor Henry II, the mantle was referred to in early records as “casula seu pallium Ysmahelis ducis Apulie” --a chasuble (a vestment used by a priest celebrating the mass), and was associated with its original donor, Ismahel, Duke of Apulia, rather than with Emperor Henry.  During the late sixteenth century, the garment, preserved in the Bamberg Cathedral treasury, began to attract the attention of visitors as a relic linked to the canonized Emperor. It was then studied by the Jesuit Bollandists, whose recording of the lives of all the saints in the Catholic calendar resulted in the Acta Sanctorum -- one of the most ambitious publishing projects of the Counter-Reformation. In his “Life of St. Henry” (1723), the Bollandist scholar J. B. Sollerius included the first published illustration of the garment. Its status as a relic, though tenuous—it is not clear if Henry ever wore it, and it was certainly made after his coronation as Emperor in Rome in 1014—enhanced its renown. Heinrich Schütz’s monograph, the first extensive iconographic study of the mantle’s complex Christian and cosmological imagery and inscriptions, included this version of the earlier print. However, some of the embroidered inscriptions were rendered incorrectly in the illustration, as is evident when compared to the surviving textile. At some point after the publication of Schutz’s book in 1754, the closed, bell-shaped chasuble illustrated in the book was opened up down the front to create a semicircular mantle or cloak, as it appears today.

Schütz was a prominent Jesuit theologian at the University of Ingolstadt. His book was published at a time when the Jesuits’ influence on higher education in the region was threatened by secularists. This scholarly reminder of the harmonious relationship between church and state embodied by Henry II as both saint and emperor may have been intended to appeal to the current secular ruler of the region, the Duke of Bavaria, a descendant of the Holy Roman Emperor, for continued protection of the Jesuits. Ultimately, the Jesuits lost their power at the University and were suppressed by 1773. 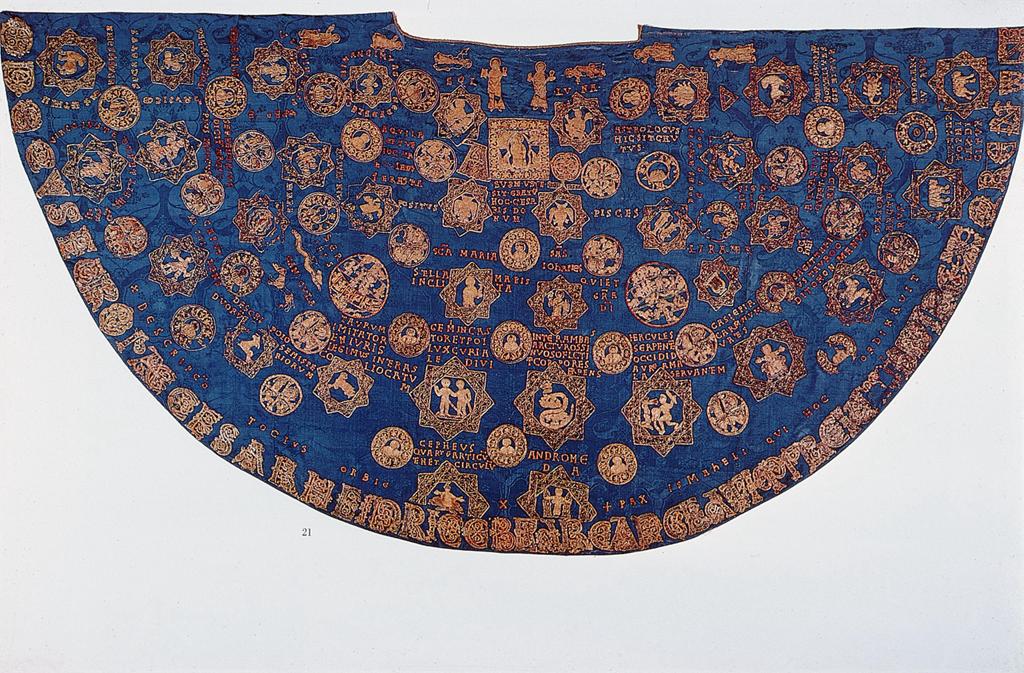 The mantle described in Schütz’s monograph still survives in Bamberg (now in the Diocesan Museum, after a period in the state treasury in Munich), though it has endured considerable changes during the almost one thousand years since it was made. As the embroidered inscriptions indicate, it was the gift of Ismahel of Bari to the Holy Roman Emperor Henry II. Defeated in 1018 by the forces in support of the Byzantine emperor at the battle at Cannae, Italy, Ismahel fled to Bamberg to try to win Henry’s support. In 1020, they were joined there by Pope Benedict VIII to confirm a Christian coalition against the Byzantine emperor’s influence in southern Italy. The magnificent garment was probably presented by Ismahel to coincide with the coalition’s Easter celebrations, at which time Henry named him Duke of Apulia. The inscription running around the hem has been translated by one author as, “May good luck be with you, Emperor Henry, treasure of Europe. May your empire grow larger, you ruler for all time.” Ismahel died six days later, was buried in Bamberg, and Henry donated the precious item to Bamberg Cathedral, which he had founded in 1007. The inscription beginning “Pax Ismaheli…” (probably a reference to the death of Ismahel) was then added (lower right, above the earlier inscription).

Although the original ground fabric was an imported purple Byzantine silk, the gold embroidery is thought to have been commissioned by Ismahel locally, with designs in the style of certain Ottonian manuscript illuminations, possibly originating in the Regensburg/Reichenau area. Thus the gold embroidered captions would have imitated the appearance of gold ink script on purple vellum, which was reserved for the most important manuscript commissions, such as those for an emperor. In the late fifteenth and early sixteenth centuries, major repairs were made to the mantle. All of the embroidered motifs and inscriptions were cut from the original ground (since it was wearing away) and restitched onto an Italian Renaissance blue silk damask ground, in approximately the same positions. With golden star-shaped frames and personifications of the constellations now embroidered on a blue ground, the mantle was referred to by an early twentieth-century scholar as the “Sternenmantel” (Star Mantle). The embroidered inscription on the lower left refers to the imagery as “a description of the whole world.” 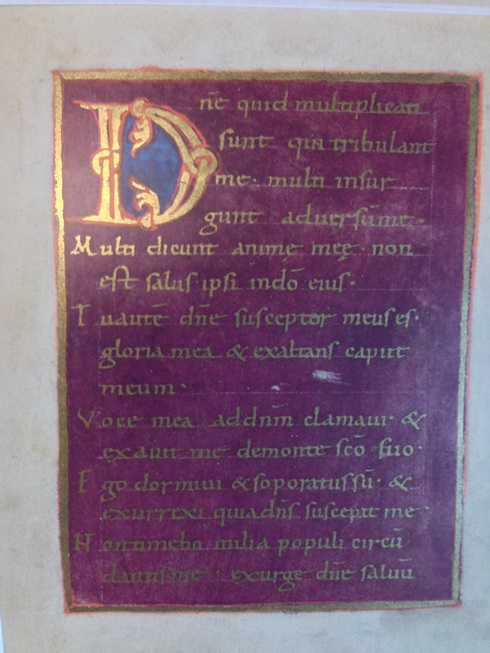 Since Schütz’s publication, many studies of the origins of the imagery on the mantle have followed, tracing similarities with motifs and script found in illuminated manuscripts, metalwork, and other late Carolingian and Ottonian art. 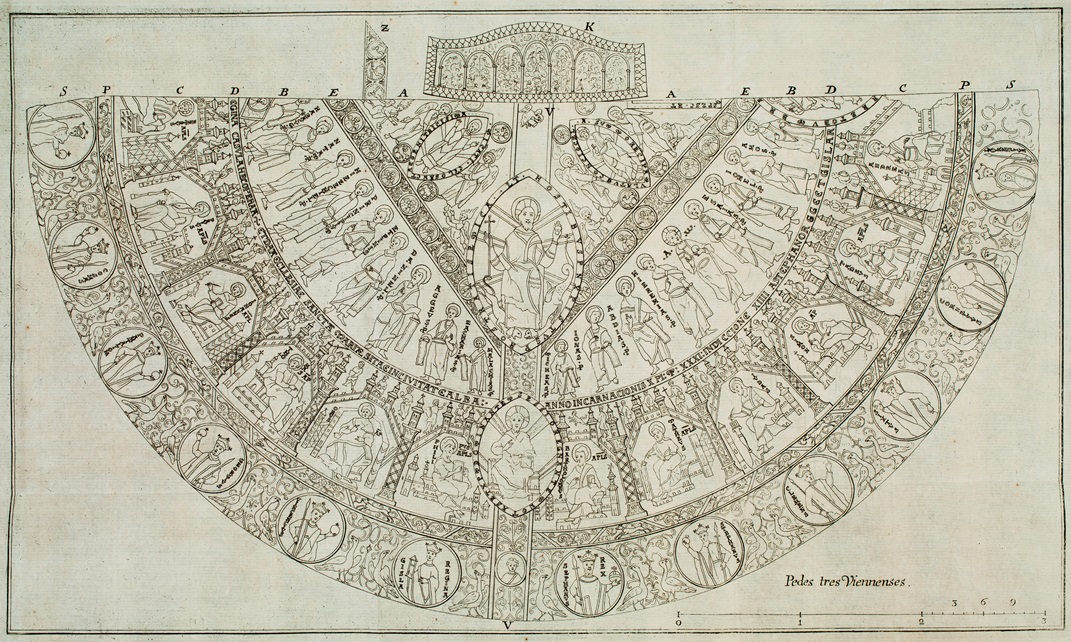 Ferenc Balassa’s Casulae S. Stephani regis Hungariae … is also a scholarly description of the imagery and inscriptions embroidered on the chasuble of Saint Stephan, the first king of Hungary, with an added chronology of its use as the mantle later worn in the Hungarian coronation ceremony. Perhaps coincidentally, Balassa’s book appeared in Vienna in the same year that Schütz’s monograph was published in Ingolstadt.

The illustration reveals what is especially difficult to discern in the ancient textile itself – that the Latin inscription running along the semicircular band (beginning at point D in the print) records the donation of the chasuble by King Stephan of Hungary and his wife, Queen Gisela, to the church of the Virgin Mary in Székesfehérvár in 1031.

This book was the published dissertation of Ferenc (Franciscus) Balassa, presented at the Theresianum Academy in Vienna in October 1754.  Founded by the Empress Maria Theresa in 1746 for the education of young men being groomed for the Austro-Hungarian Imperial civil service, the Theresianum was run by Jesuits, including Erasmus Frölich, Balassa’s professor and the Academy’s Librarian. Some copies of this book actually credit Frölich as the author. After graduating from the Theresianum, Balassa had a long administrative career in the Austro-Hungarian Empire.

By the time the mantle was worn by Empress Maria Theresa of Austria at her coronation as King of Hungary (the title of Queen was not permitted) in 1741 in Bratislava, it had become a powerful symbol of the Hungarian monarchy. Although primarily an academic exercise, the publication emphasizes the importance of the mantle for Hungarians, whose concerns the Empress took very seriously. Her promotion of the cult of the Hungarian saint, including the declaration of August 20 (Saint Stephan’s day), as both a state and religious holiday, was part of a conscious policy of conciliation of her Hungarian subjects 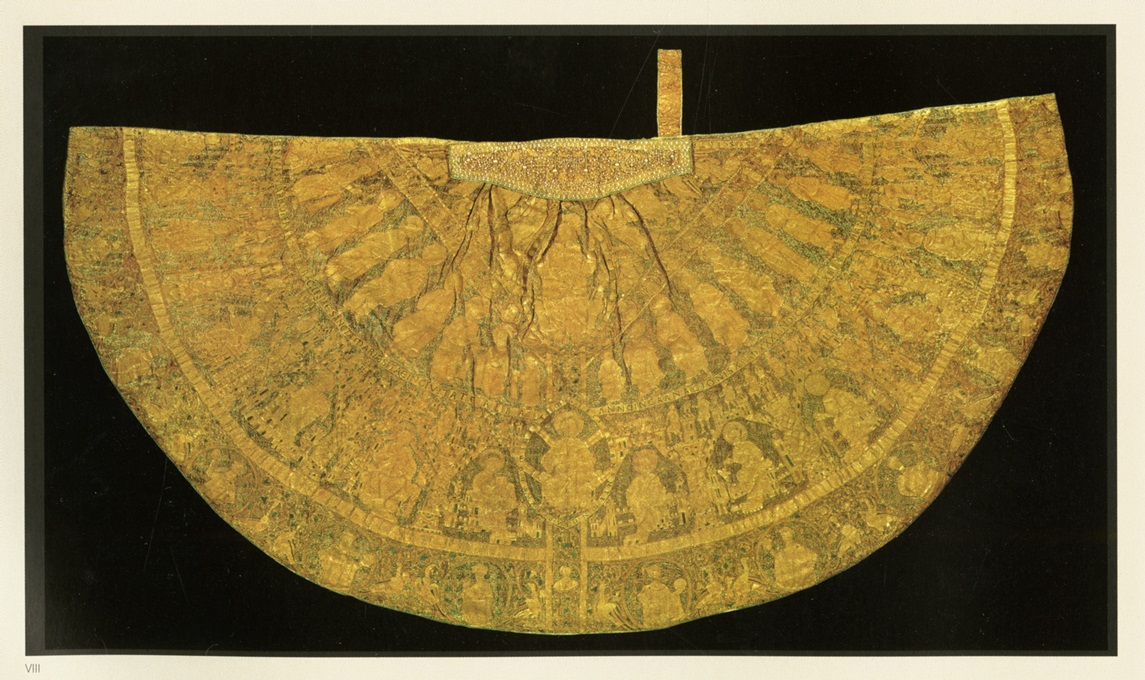 Now preserved in the Hungarian National Museum, Buda, the Hungarian Coronation Mantle depicted in Balassa’s book had already been altered from a bell-shaped, closed chasuble to a semicircular, open mantle by the time his book was published. It is still not known where the chasuble was made, in spite of continued research into the style of its biblical imagery and embroidered inscriptions. Traditionally, it was suggested that Queen Gisela (the sister of Emperor Henry II) and her ladies-in-waiting were responsible for its production in Hungary. Like the Bamberg mantle, the gold embroidery was originally laid on a Byzantine silk ground, this one a green and red patterned samite, much repaired later. It continued to be worn at the Hungarian coronation ceremony until 1916. After many changes of location, the mantle, along with St. Stephan’s crown and other royal regalia, was taken to the United States in 1945 for safe keeping, only finally returning to Hungary in 1978. 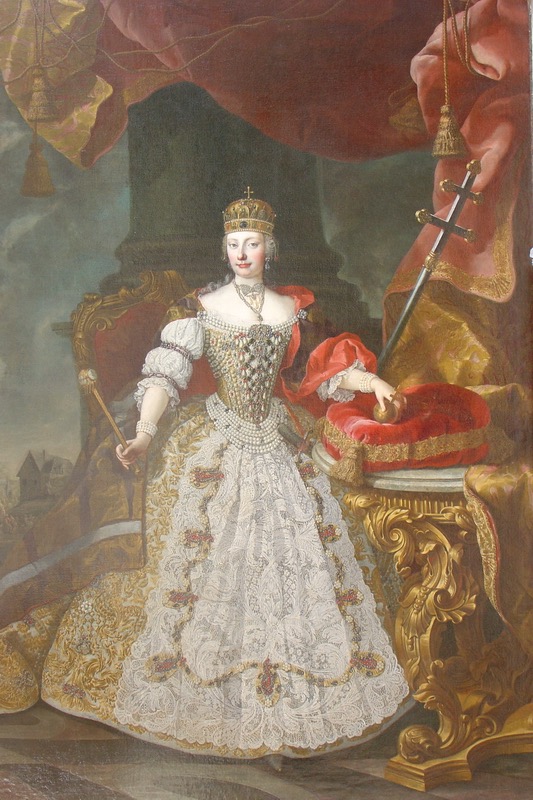 In this portrait by Daniel Schmiddely, the Hungarian Coronation Mantle is draped around the shoulders of Empress Maria Theresa. After the formal coronation ceremony, each Hungarian monarch, clothed in the sacred mantle and crown, was required to ride up a hill constructed with soil from various parts of the Hungarian lands, and raise the sword of St. Stephen to all four corners of the kingdom for symbolic protection. The Empress, who had never before been permitted to ride, learned this skill in order to complete her ceremonial duties.