Nanshoku ōkagami: Honchō waka fūzoku [The Great Mirror of Male Love: The Custom of Boy Love in Our Land] is a classic of Japanese literature and art. Written by Ihara Saikaku, one of the most popular writers of the Edo period (1603-1868) and punctuated with images by the era’s leading book illustrator, Yoshida Hanbei, it is a collection of forty tales about the romantic relationships between men and adolescent boys in 17th-century Japan. The book was extremely popular when it was initially published in 1687 and was one of the earliest titles to achieve widespread success in both of Japan’s major commercial markets: the Kamigata (Kyoto-Osaka) region and the capital city of Edo (present-day Tokyo).1 To this day, The Great Mirror of Male Love is considered a masterpiece of ukiyo-zoshi [“literature of the floating world],” a major genre of fiction that focused on themes related to the pleasure quarters and theatre districts of Japan’s major cities. 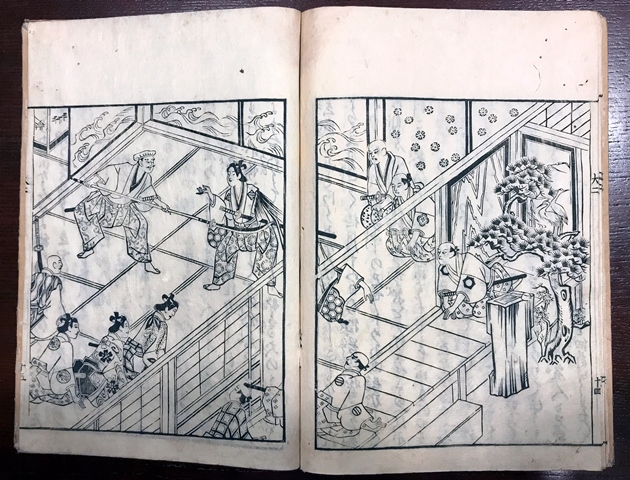 Volume 2b: Though Bearing an Umbrella, He was Rained Upon. A jealous lord uses a halberd to cut off the left arm of Korin, the young lover that has betrayed him. Taunted by the boy, he then cuts off his right arm before decapitating him.

Marquand Library recently acquired one of only two known copies of the deluxe first edition of The Great Mirror of Male Love.2 Distinct from other editions in which the eight parts of the novel were produced as eight books of standard size (roughly 18-22 x 13-14 cm), our copy was more extravagantly published as ten larger (27.3 x 19.4 cm) books. (To create the ten books, parts two and seven were each divided into two separate volumes.) 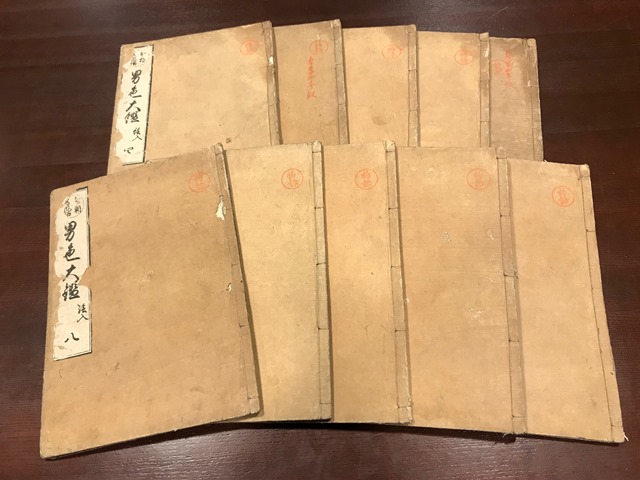 The deluxe edition was collaboratively published by two Kamigata publishers: Fukaeya Tarōbei of Yodoyabashi suji, Gofukuchō, Osaka and Yamazaki Ichibei of Nijō Street in Kyoto. It is the only printing of the book to bear the imprint of these publishers alone. Just a few months later, there was a second printing of Mirror of Male Love—an eight volume set done in collaboration with a third publisher located in the capital city of Edo. At this time, the original woodblock for the final page was altered (carved) to include the name of this publisher, Yorozuya Seibei of Edo Yorozuya:

Partnering with an Edo publisher for the second printing of the book may have served to broaden Saikaku’s following in the capital city and subvert some of the pirating of his works that had gone on there in the past.3  Something, however, appears to have happened to the original woodblocks between the first Kyoto/Osaka printing and the second printing in Edo. Variations between the Marquand copy (see below, left) and a facsimile of a second edition copy in the collection of the Akagi Bunko (right) confirm that some of the woodblocks have been re-carved or replaced, probably due to wear and/or damage.4

Saikaku was already an extremely popular author when Mirror of Male Love was published in 1687. Throughout most of his career he had been known as a composer of comic linked verse (haikai no renga). It was only in the last ten years of his life, after the commercial success of a long grief-stricken poem he wrote after the death of this wife in 1675, that he began to write prose. In 1682, he published the first of his prose-works: Life of an Amorous Man (Kōshoku ichidai otoko), which enjoyed great success. In this book and all of the works that followed, Saikaku’s themes of sexual love resonated with a very literate book-buying public. Mirror of Male Love, it is believed, was planned to especially “appeal to both the samurai men of Edo and the townsmen of Kyoto and Osaka, his regular audience.”5  For that reason, the book is organized into two parts, the first comprised of twenty stories of relationships between men and adolescent boys of the samurai class and the second of twenty stories of the relationships between men of the ‘merchant and artisan classes’ and young actors of the Kabuki theatre, who were also prostitutes. As homosexuality was an accepted practice at this time, Schalow explains: “Popular (sic) literature in premodern Japan did not depict male love as abnormal or perverse, but integrated it into the larger sphere of sexual love as a literary theme.” As can be seen in the stories of Mirror of Male Love, however, acceptable male homosexual relations during this period were required to be between a man and a boy.6 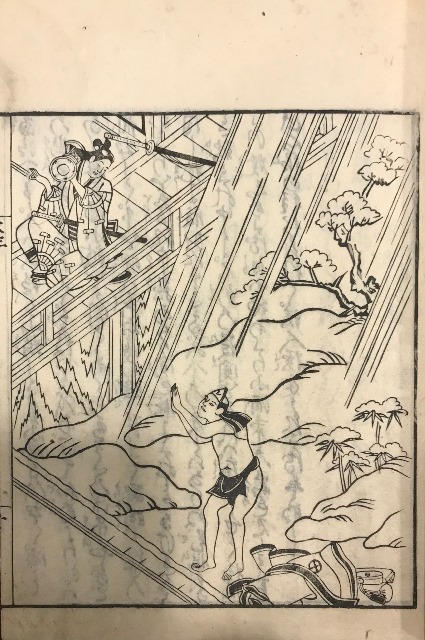 Volume 3: Tortured to Death with Snow on His Sleeve. A jealous Sasanosuke forces his lover, Haemon to stand naked in the snow. When Haemon later dies from exposure, Sasanosuke commits seppuku on the bed beside him—and is praised for his loyalty.

Women may serve a purpose for the amusement of tired old men in lands
lacking handsome youths, but in a man’s lusty prime they are not worthy
companions even for conversation. Our entry into the gateway of boy
love has been delayed long enough! 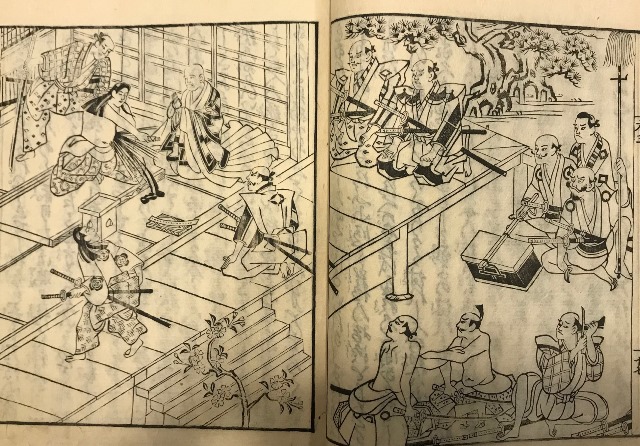 Volume 3: The Sickbed No Medicine Could Cure. A beautiful boy is ordered to commit seppuku after attacking the rejected suitor he feared would kill him. 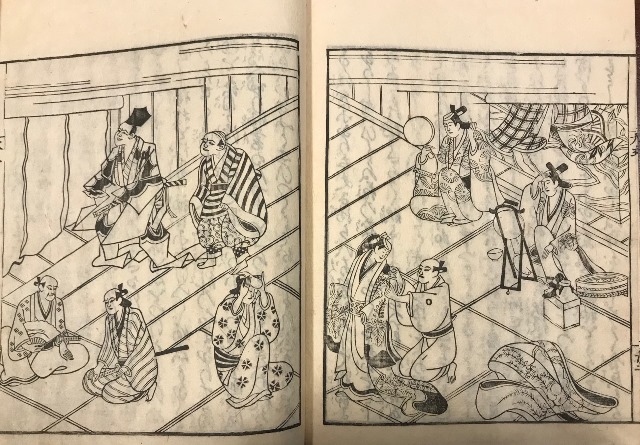 Volume 5: Votive Picture of Kichiya Riding a Horse. At a Kyoto theatre, a suitor looks for the beautiful actor he encountered years earlier. He finds the boys here lovely, even before they put on their makeup.

The Great Mirror of Male Love is part of Marquand Library’s purchase of a large group of 17th-century Japanese books from the legendary Shibui Collection. Amassed in the early 20th century by art historian Kiyoshi Shibui (1899–1992), these books preserve both the dawn of Japanese commercial publishing and the origins of the country’s celebrated Ukiyo-e woodblock print tradition.