Mummies and Museums: Egyptology in Britain in the Early Eighteenth Century 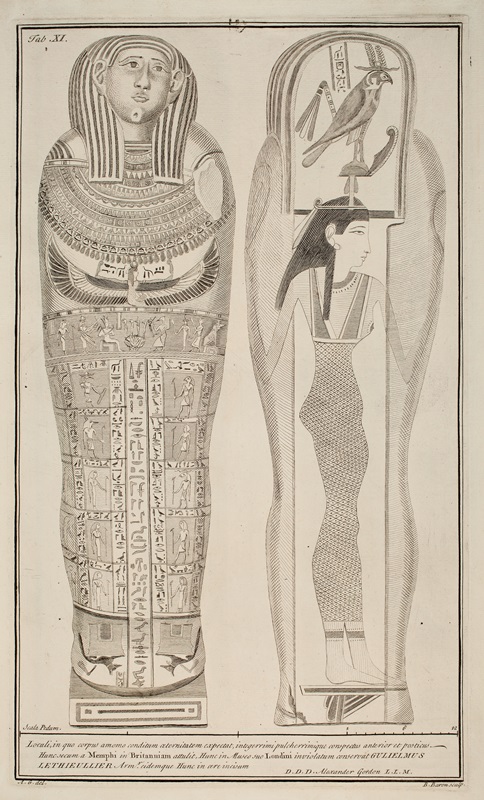 Illustration by B. Baron after Alexander Gordon, in Alexander Gordon, An Essay Towards Explaining the Hieroglyphical Figures, on the Coffin of the Ancient Mummy Belonging to Capt. William Lethieullier, plate XI

A recent acquisition on display in Marquand Library sheds light on the evolution of Egyptology in Britain in the first half of the eighteenth century. Marquand’s copy of Alexander Gordon’s Essay Towards Explaining the Hieroglyphical Figures, on the Coffin of the Ancient Mummy Belonging to Capt. William Lethieullier… (1737), consists of twenty-seven engraved plates illustrating ancient Egyptian artifacts in British private collections, and two essays about particular Egyptian mummies in those collections, bound with some ephemeral documents that give insight into the final form and content of Gordon’s publication.

Europeans’ fascination with ancient Egypt began long before the French archaeological excavations that followed Napoleon’s Egyptian campaign (1798-1802). From at least the mid-sixteenth century, mummified bodies and artifacts from Egyptian sites were added to the cabinets of curiosities of private collectors, the precursors of today’s museums. Mummies and their decorated coffins, in particular, were valued both for their anatomical interest and as objects of material culture.

During the eighteenth century, Egyptology became a more institutionalized pursuit. The Egyptian Society (1741-1743), established by a group of British amateurs who had travelled to Egypt or owned private collections of ancient Egyptian objects, met periodically to display and discuss their collections and interests. The Society’s members included Captain William Lethieullier (1701-1756), the owner of the mummy case illustrated here, which was the subject of one of the essays in Gordon’s publication. Gordon acted as secretary for the Society.

A reading of Gordon’s account of the procurement of this object reveals that the desecration of sacred sites for plunder and the Eurocentric appropriation of archaeological finds in the pursuit of such acquisitions were then the norms among his contemporaries:

“This singular Monument of Egyptian Antiquity was found by some Arabs, in one of the ancient Cryptae, or Catacombs of  the Dead, in the Field of SAKARA [sic], about three Leagues from Cairo, in the year 1721, while its present Possessor Captain William Lethieullier, was in Egypt, to whose Assiduity in promoting Matters of Antiquity and Curiosity, the Learned World owes this noble Remain, and who afterwards at Alexandria ship’d it on board the Dove Galley for England, where it arrived in the year 1722. It consists of two distinct Particulars, the CADAVER or Mummy it self [sic], and the LOCULUS FERALIS or Coffin, in which it was contained.”

In 1756, Lethieullier bequeathed his collection of Egyptian objects, including this superb mummy coffin (and mummy), to the recently established British Museum in London. On the coffin, the deceased is named as Irtyru and is shown being judged by Osiris and Thoth below the depiction of the sky goddess Nut. Although Sir Hans Sloane’s private collection of Egyptian objects included the first two mummies acquired by the British Museum at Montagu House in 1753, the Sloane mummies were later discovered to be fakes. 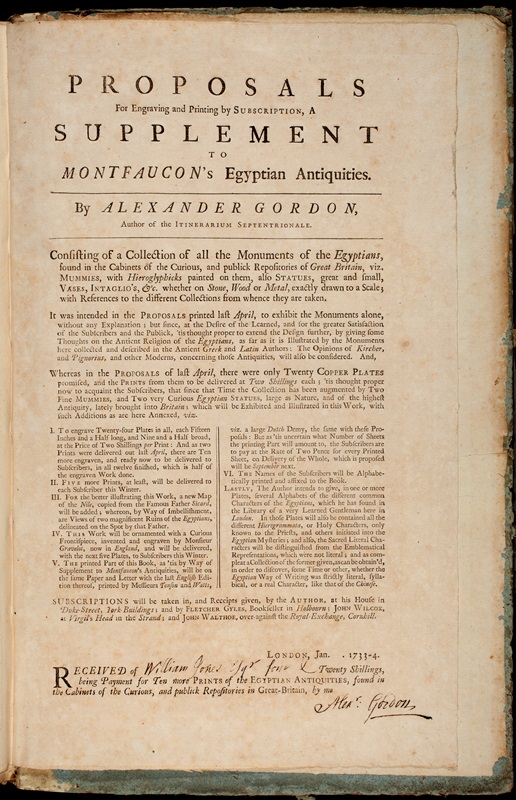 Alexander Gordon (1792?-1754?), Proposals for Engraving and Printing by Subscription, a Supplement to Montfaucon's Egyptian Antiquities (London): (publisher not identified), (1733-34)

Gordon’s publication project evolved, somewhat confusingly, during the 1730s and is documented in Marquand’s copy. This printed proposal or prospectus, bound in at the end of the book, explains that the author intended the publication to serve as a supplement to “Montfaucon’s Egyptian Antiquities.” Bernard de Montfaucon’s encyclopedic work on ancient art and societies, Antiquité expliquée et représentée en figures… (1719, revised 1722-24), had been translated into English by David Humphreys as Antiquity Explained, Represented in Sculptures by the Learned Father Montfaucon  (1721-1722), and The Supplement to Antiquity Explained…(1725). Twenty plates illustrating Egyptian objects (without descriptive texts) in British private collections had originally been proposed, but in this document, Gordon now promises to produce, by subscription, twenty-four plates, to include recent finds.

But another (undated) “Advertisement to the Reader,” bound before the plates in Marquand’s copy, noted that “twenty-five” prints had already been delivered to subscribers, promised that “an Explanation of the remaining Prints will come forth with all remaining Speed…,” and added that “The History of the Egyptians,” Gordon’s new book, was “now very near ready to put to Press.” However, only the two essays of 1737 are known to have been published. At Gordon’s death, the manuscript for "The History of the Egyptians”  was bequeathed to his son, still unpublished. It was purchased by the British Museum in 1831 (British Museum, Addit. MS. 8834).

William Jones, one of the subscribers, whose name was written at the bottom of the Proposals…, was a tutor to George Parker, the second Earl of Macclesfield, in whose collection this book remained. With Gordon’s countersignature, this scarce document was preserved as a receipt. No other copies of the Proposals… are recorded, though others may exist. 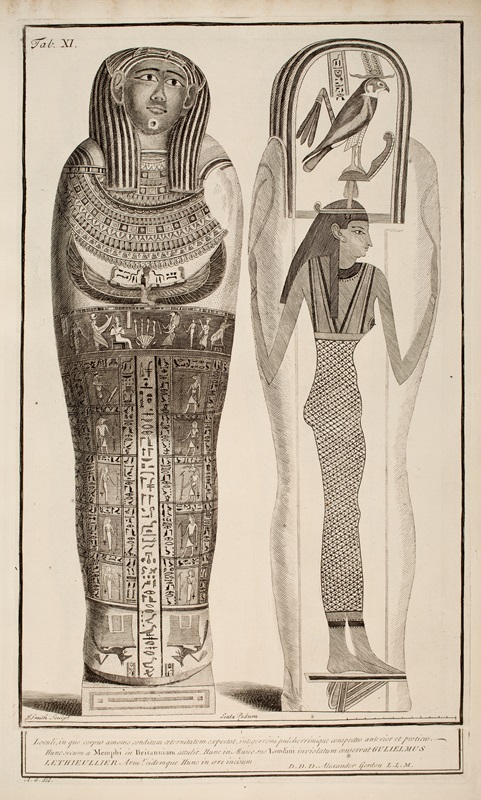 In addition to the twenty-five plates of Egyptian antiquities in British collections that Gordon finally produced, Marquand’s copy of his publication includes two extra plates, one each of the Lethieullier and Mead mummies, both drawn by Gordon but engraved by different artists. Each subscriber was free to have the loose sheets bound to suit their taste, which may explain the extra plates and notices in Marquand’s copy. 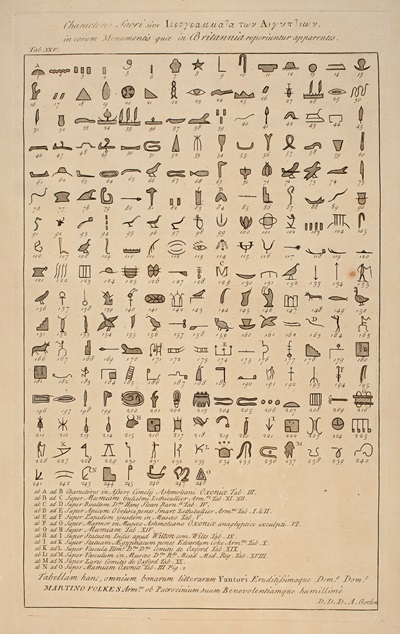 A page of hieroglyphics found on the Egyptian objects in British private collections, illustrated by the author, in Alexander Gordon, An Essay Towards Explaining the Hieroglyphical Figures…,pl. XXV.

The last plate showed pictorial symbols gathered from the objects depicted in the publication. In his essays, Gordon speculated on the meaning of some of these symbols, drawing on the writings of earlier scholars who recognized that they offered clues to a greater understanding of Egyptian religion, art, and society. Not until the discovery of the Rossetta stone in 1799, would translators have the key to the true deciphering of Egyptian hieroglyphics (from the Greek for “holy writings”).

Gordon, a graduate of Aberdeen University, became Secretary to the Society of Antiquaries and published Itinerarium Septentrionale (1726), an illustrated book on Roman remains in Scotland, and a translation of Scipio Maffei’s book on amphitheaters, before becoming interested in Egyptology in the 1730s. He ended his days in Charleston, South Carolina, where he was Secretary to James Glen, the Governor of South Carolina.

These items will be on display in Marquand Library through late April 2019.