SCENIC VIEWS IN AND AROUND SHANGHAI

SCENIC VIEWS IN AND AROUND SHANGHAI 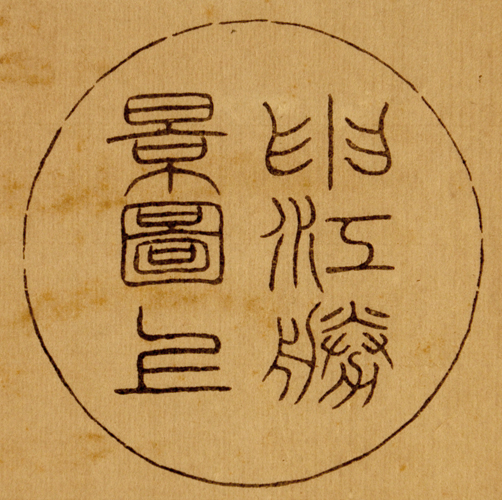 Opened in 1879 by former English shipping agent Ernest Major (1841-1908), the Dianshizhai Lithographic Printing House 點石齋出版社in Shanghai introduced lithographic printing to China with presses imported from England. The publications of Dianshizhai stood out for the fine quality of their fonts, manageable size, and value.

Major had distinguished himself seven years prior to this by founding the first Chinese independent newspaper, Shenbao 申報 (Shanghai Gazette), which took for its primary audience the average Chinese reader. The only newssheet in regular circulation before this was the Peking Gazette, which was devoted to court and government news and written in a classical style virtually unintelligible to the ordinary person. Major’s innovations included keeping the paper low in cost to both readers and advertisers; the use of baihua, or everyday language; and printing articles that came, in the majority, from Chinese writers, and which were often critical of the government. 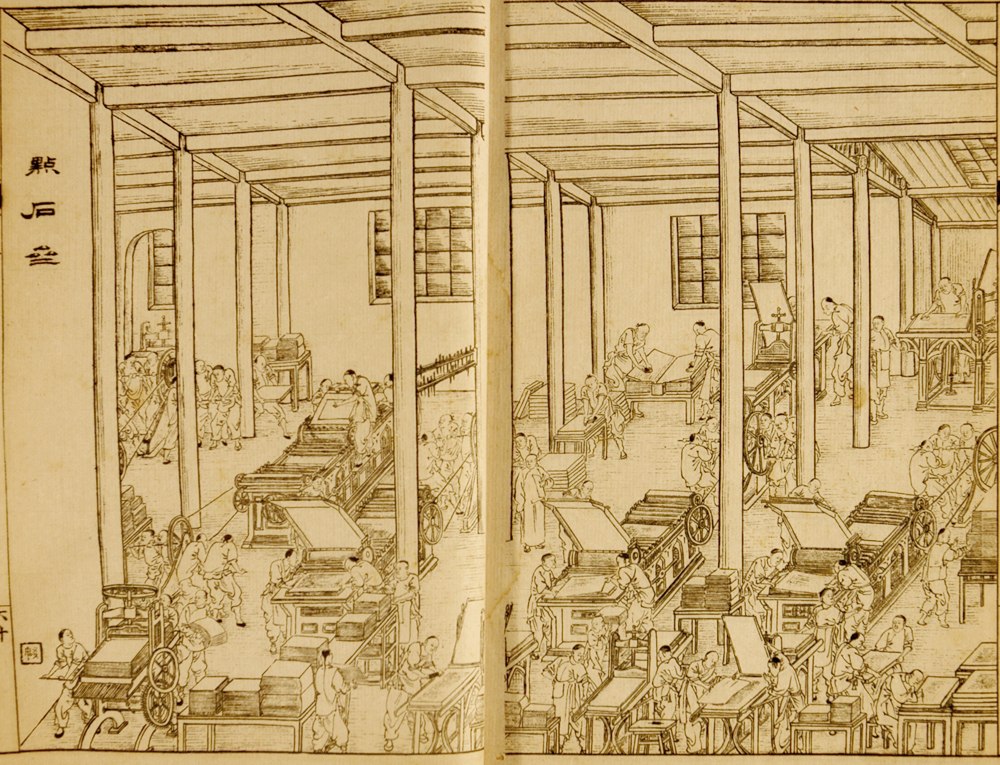 Helmed by Master Printer Qiu Zi’ang 邱子昂 , Dianshizhai Lithographic Printing House published a wide range of works, utilizing photographic technologies to reproduce classic texts from woodblock carved editions of the past. These included the comprehensive dictionary of Chinese characters, Kangxi zidian 康熙字典 reprinted in a smaller format; the early 18th century rhyme dictionary of literary allusions and poetic diction Peiwen yunfu 佩文韻府 (Rhyme Treasury of [the Studio for] Admiring Literature); a Chinese-English bilingual edition of Sishu  四書 (The Four Books), which detail the fundamental precepts of Confucianism, in addition to a variety of Western language books, collections of rubbings, and painting manuals.

In the same year of the publication of Shenjiang sheng jing tu, Dianshizhai also launched a thrice-monthly pictorial, Dianshizhai huabao 點石齋畫報. Wu Youru was one of the contributing writers/artists.

Illustrator Wu Youru (born Wu Jiayou 吳嘉猷 , ? - 1894) was a painter of the late Qing. A native of Yuanhe 元和 (present day Wu County in Jiangsu Province), Wu  was known from an early age for his adroit synthesis of the styles of Qing masters  Qian Du (钱杜 , 1764-1844) and Ren Xiong (任熊 , 1823-1857), among others.  He excelled at depicting everyday life and customs in a quasi-journalistic style with an eye for detail that dovetailed nicely with the agendas of the pictorials he worked on, focusing on political and social criticism and a critique of foreign imperialism, keenly felt in the increasingly international Shanghai region. 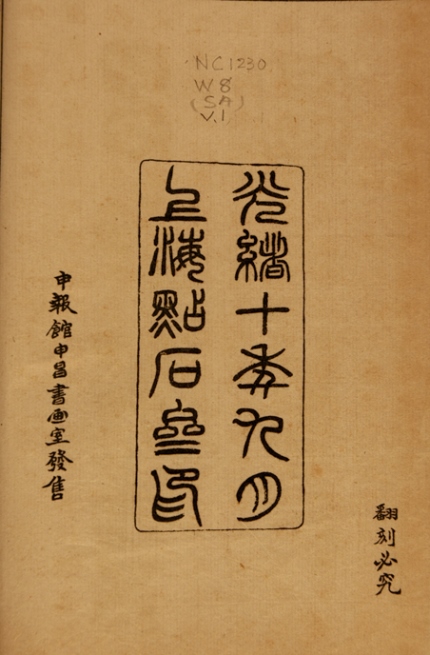 Shenjiang sheng jing tu (Renowned Scenes of Shanghai) provides a valuable record of the physical and human geography of Shanghai from the late 19th century, and is one of the earliest “scenic views” handbooks, preceding photographic albums of the same nature.

“Shen Jiang” is an alternate name for the Huangpu river that runs through Shanghai (Shen 申 being an ancient name for Shanghai). 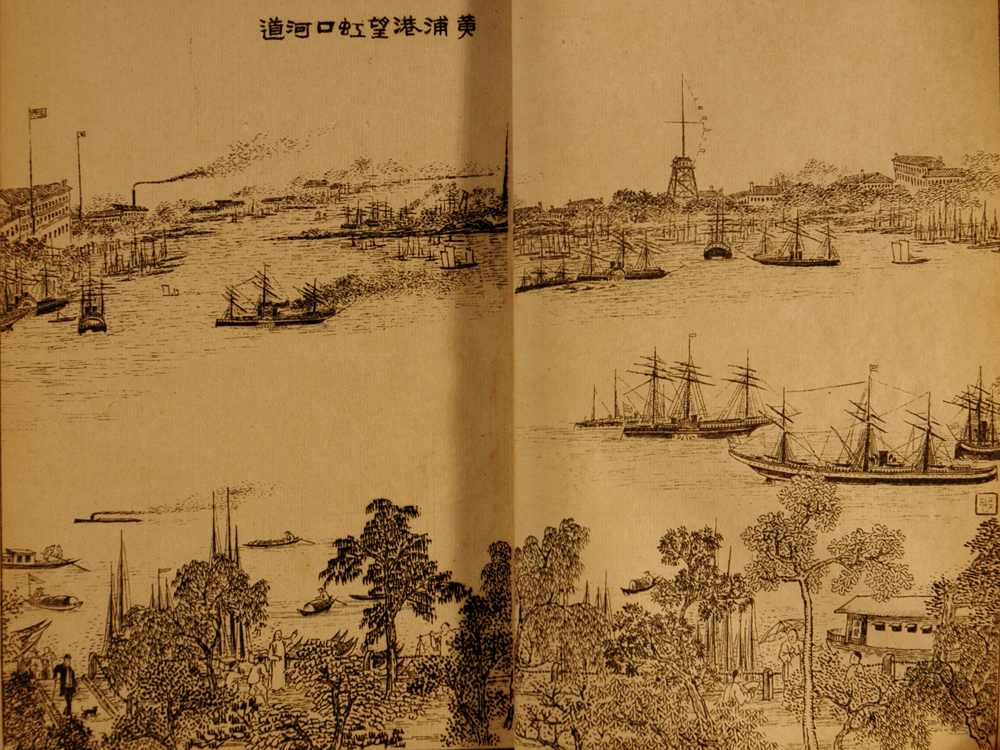 The book, divided into two chapters, or juan 卷,  of two fascicles each, illustrates a wide variety of social customs and famous sites, from cottage industries, gardens and parks, the harbor, manufacturing centers, and public entertainments to the precincts of foreigners and their activities.  Each picture occupies two facing pages and is followed by a poetic treatment of the scene depicted, written in a variety of script styles. 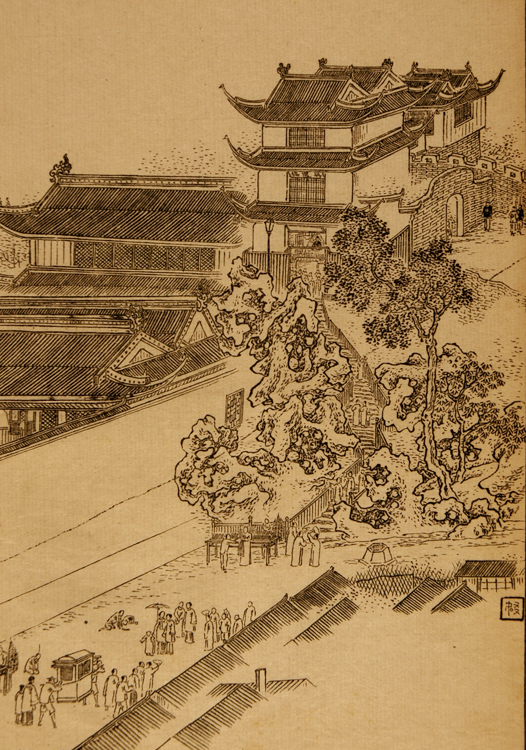 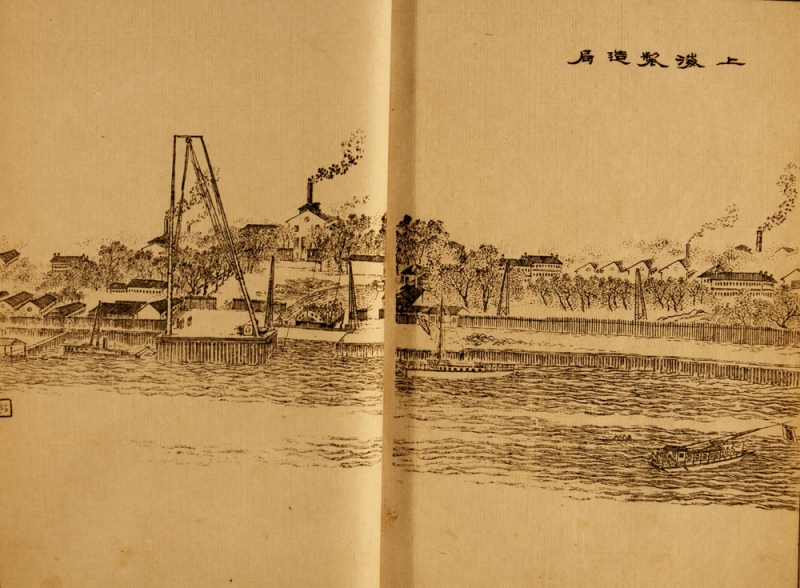 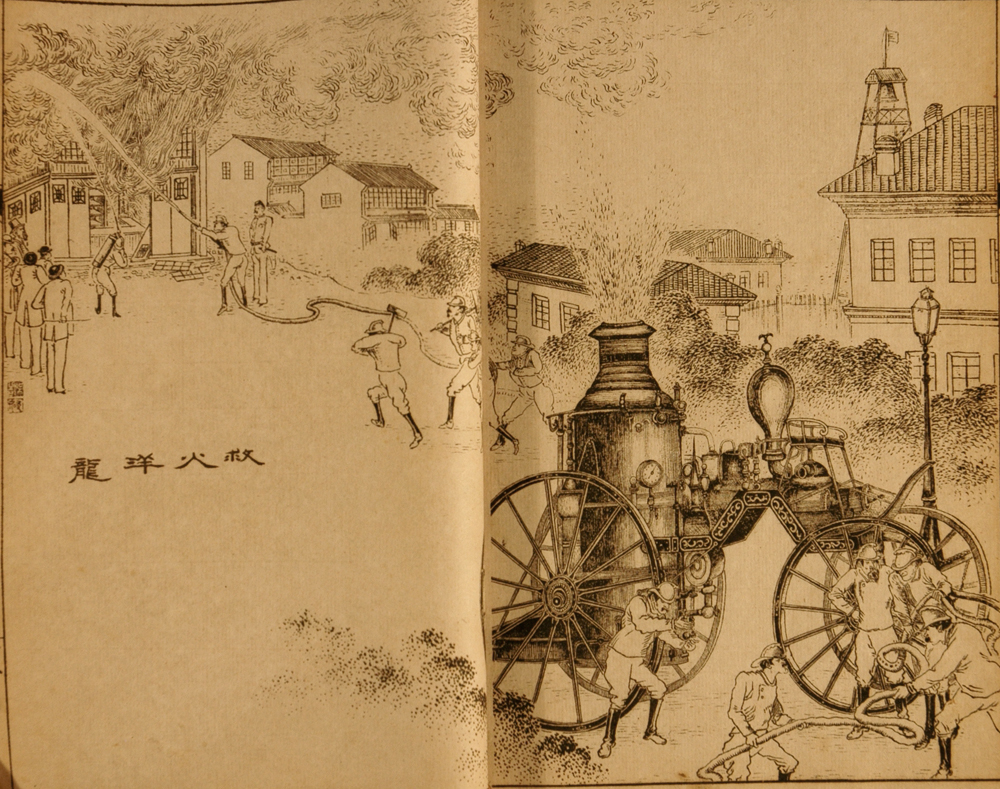 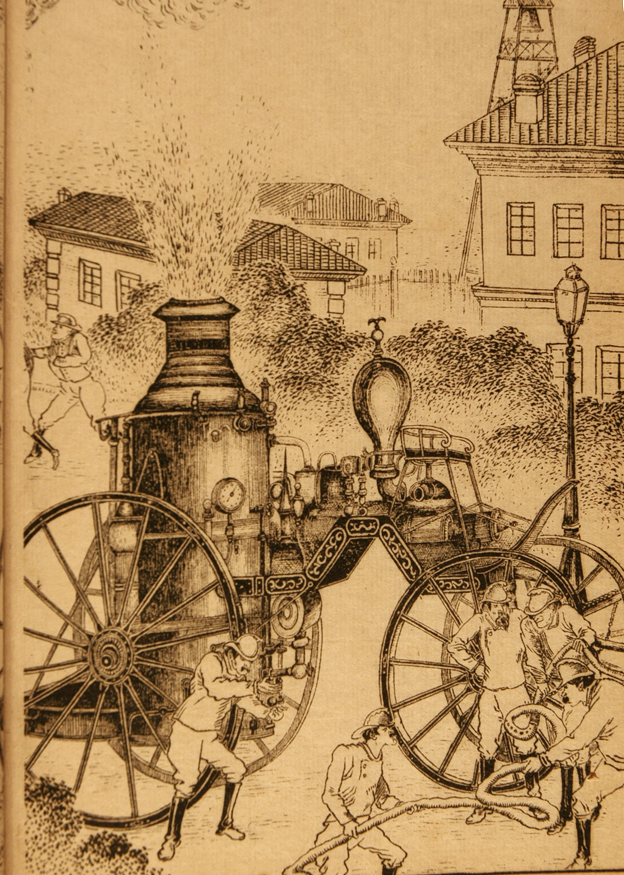 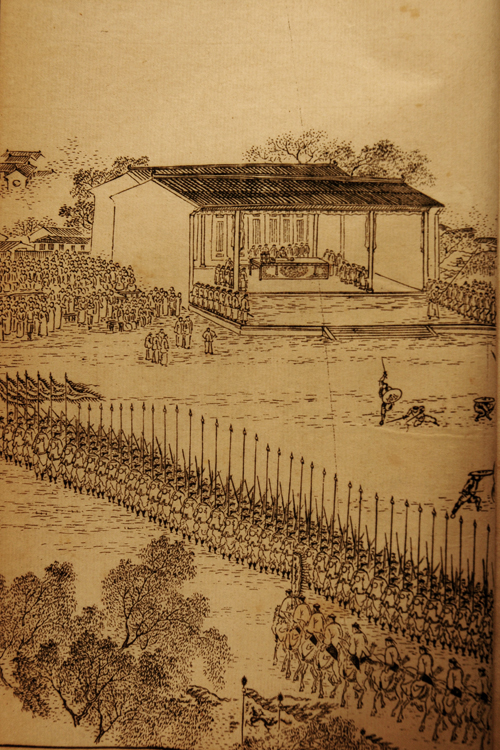 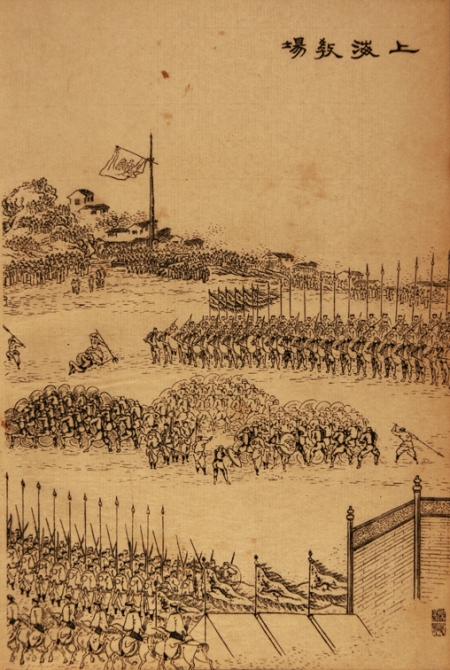 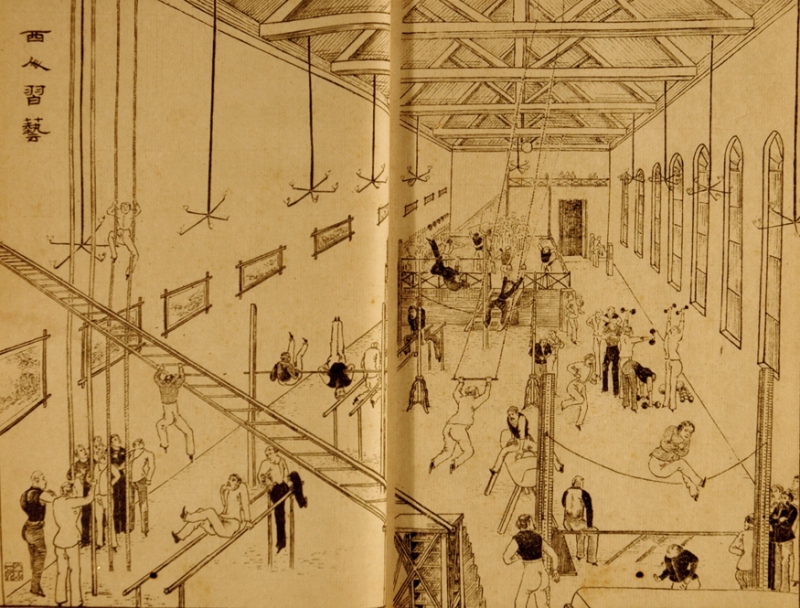 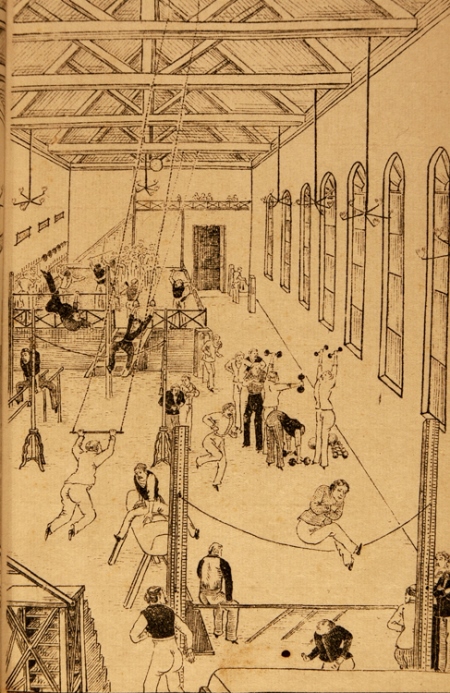 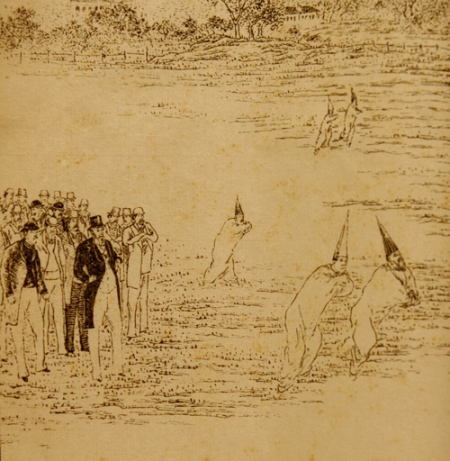 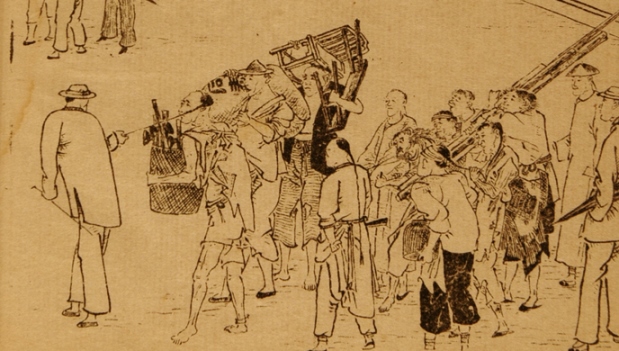