Highly modernized societies have a way of concealing the negative consequences of their ever more advanced productive forces. The result is a highly polarized division of space. On one hand, sites of pleasure create a realm in which consumption may carry on unburden by any concern for the outside world. One the other, sites of extraction and production, emission and waste create the material conditions for the former, while the violence they enact on bodies, landscapes, and ecosystems are kept securely out of sight.

The books collected here deploy a variety of pictorial strategies to peel back modernity’s glamorous veneer and uncover the irrational rationality of its underlying processes. Cédric Delsaux’s A Common Destiny provides a broad panorama of the interlocking contradictions of a world shaped by technical progress. Although initially meant to serve human interests, this progress creates a world that seems to no longer need or serve humans.  In Over, Alex MacLean takes to the skies to reveal the spatial logics of American suburbia and economic development. Jörn Vanhöfen’s Aftermath considers the fate that befalls places of consumption and glamour once the forces that kept the spectacle alive have abandoned them. Richard Misrach and Kate Orff attempt to depict, in Petrochemical America, both the highly visible and the invisible “slow violence” of petrochemical plants along the Mississippi River as it crosses Louisiana. Finally, Manmade – perhaps the more critical of the collection – seeks to challenge the human/nature distinction prevalent in environmental discourse by turning its attention to the increasingly prevalent human-nature hybrids. 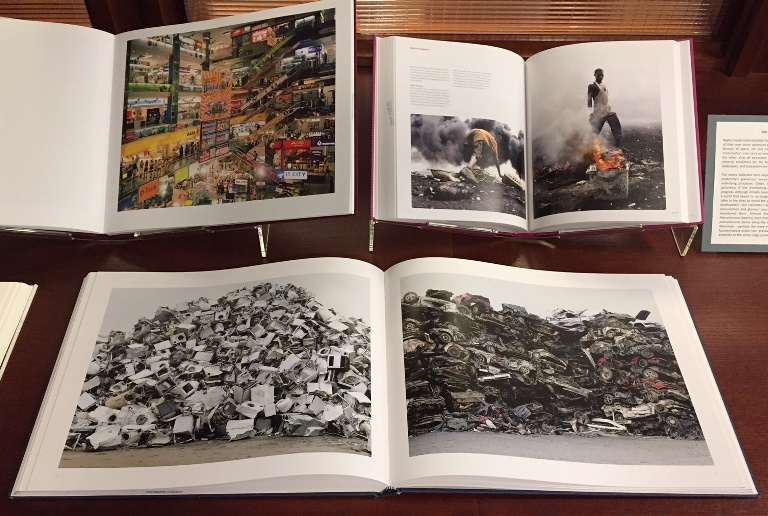