Floors on the B Floor

The Floors on the B Floor: Princeton’s Antioch Mosaics

Between 1932 and 1937, Princeton University led a series of excavations in the south of Turkey which brought to light the ancient city of Antioch, a wealthy metropolis renowned as a major center of culture and commerce in the Roman Empire. Among the most exciting finds were over three hundred floor mosaics, recovered from the remains of both public buildings including the city’s six public baths and from wealthy private homes. With an intriguing mixture of pre-Christian and Christian subject matter that made the site of special interest to the University’s Index of Medieval Art, these mosaics continue to be heavily studied today. They now reside in museums around the world, with a particularly large at Princeton University.

Mosaic is an art form dating back over five thousand years to Mesopotamia, where early examples can be found in some of the world’s oldest cities. In the Roman Imperial period, having an intricate mosaic in one’s home (or donating one to a public building) was a major status symbol; the highly-specialized process was overseen by at least one artist and undertaken by laborers who laid each tessera in place by hand. These tesserae were made of many different materials, including pebbles, seashells, and precious or semiprecious stones, although the most common material was colored glass (for a chemical analysis of some of the mosaics in Princeton’s collection, please refer to the book above). Mosaics often depicted scenes which reflected the purpose of a given room; for example, a favorite subject for dining-room mosaics was Bacchus, the god of wine, theatre, and revelry, and many baths or fountains featured designs of fish or dolphins.

Today, ancient mosaics are often hung on museum walls, but in Antioch they were exclusively floor decorations which were accompanied by bright wall-paintings, as can be seen on the cover of Beyond Iconography. Both wall paintings and floor mosaics utilized perspective and trompe-l’oeil-like techniques to create vibrant landscapes that seemed to extend beyond their true limits, blending architectural fiction and reality to dazzle guests and visitors. Because wall paintings fade over time, mosaics are one of the few ways for modern viewers to appreciate the Romans’ taste for brightly-colored and visually-stimulating decoration.

After reading about ancient mosaics in this mini-exhibit, Marquand users are highly encouraged to view the collection on this library’s B Floor, those in Firestone Library and the Architecture building, in the McCormick Hall lobby, and in the galleries of the Princeton University Art Museum! If interested in learning more, email marquand@princeton.edu for a list of books and articles on Antioch. 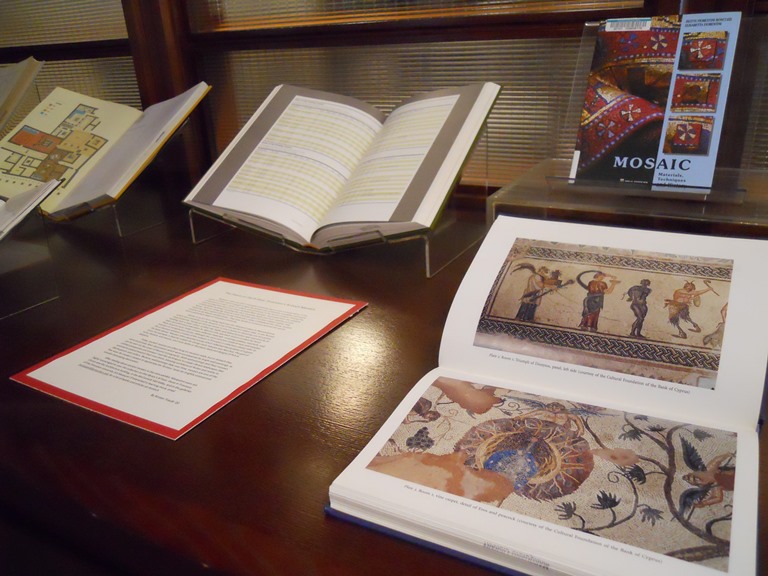 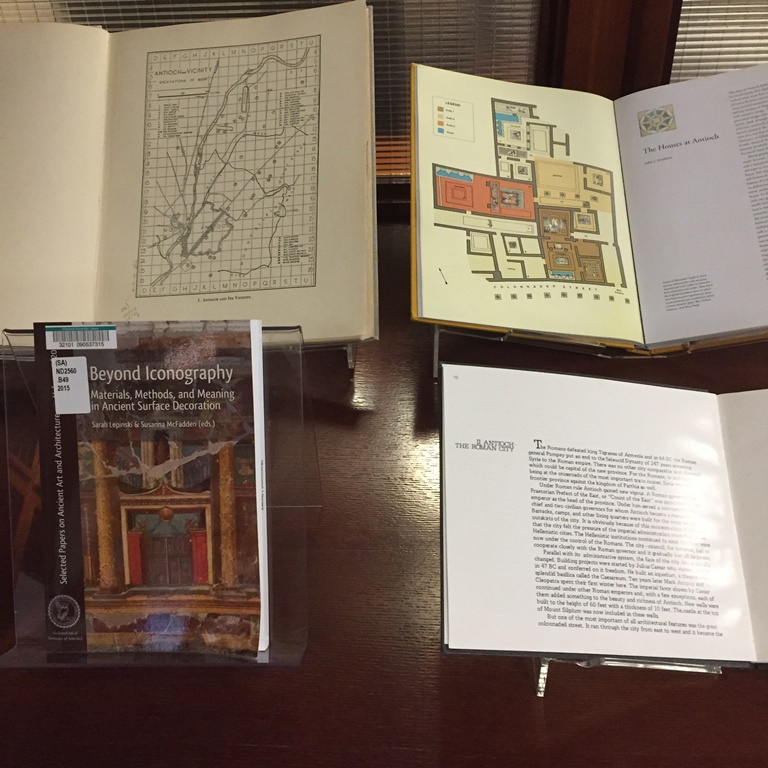