From Old to New: A Thousand Years of Tianjin’s Art

From Old to New: A Thousand Years of Tianjin's Art

When one thinks of Chinese painting, the usual association is that of landscape paintings, mainly of mountains and rivers. Indeed, this type of work, known as shan shui (山水, literally, mountain and water) painting, is one of the major motifs of Chinese painting, and has had an enduring legacy from the time it was formally categorized in the 5th century through what many have called the peak of its development in the Five Dynasties to Song dynasty periods (10th to 13th centuries) and beyond. Together with portraits, animal painting, and narrative painting, shan shui has been a staple of Chinese art for well over a millennium.

Shan shui painting is seen generally as the category of Chinese painting that depicts mountains and rivers, but to artists of the day, this reductive definition was a misrepresentation of their painting.  Shan shui painting, in their eyes, needed three features: flow, threshold, and heart. A painting has many sources of flow, from the path of a river to the contours of a mountain, but each flow must be natural and evocative of nature. Further, each painting must have a threshold, a place where flows end and to which the eye is naturally drawn. This threshold could be the peak of a mountain or a small house sitting in front of it. The third and most important element, heart, is the center of the painting. All of the above elements should point to it, and it embodies the meaning of the painting. Without these three elements, the painting cannot be considered a true shan shui painting.

Shan shui painting, while perhaps the popular image that most readily comes to mind when we think of Chinese painting, is by far not the only type. I have chosen to display here two other types of pictorial representation: animal painting and New Year’s prints. First, I have chosen animal painting because it is unique in blending detailed, fine line painting in describing the subject, combined with the more flowing, graceful background seen in shan shui paintings.

Secondly, I have chosen a traditional art form from my own hometown: Yangliuqing (杨柳青) New Year’s woodblock prints. This type of picture arose around 1600 in Yangliuqing, then a small town and now a part of the large northern city of Tianjin, and has become popular around the world. Many of the Chinese New Year decorations seen today are based on the art style depicted in these images. Yangliuqing prints mainly depict children’s games and family events, often accompanied by objects that are believed in folklore to bring good fortune for the New Year. These woodblock prints have remained popular and have been in mass production since their inception.

As a final note, in honor of my hometown, Tianjin, all of these selected images are by artists from that city. Thank you, and enjoy. 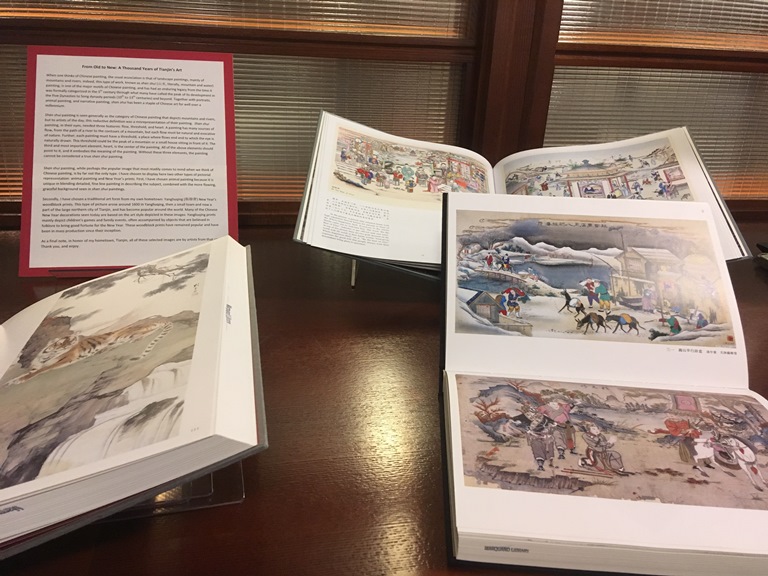