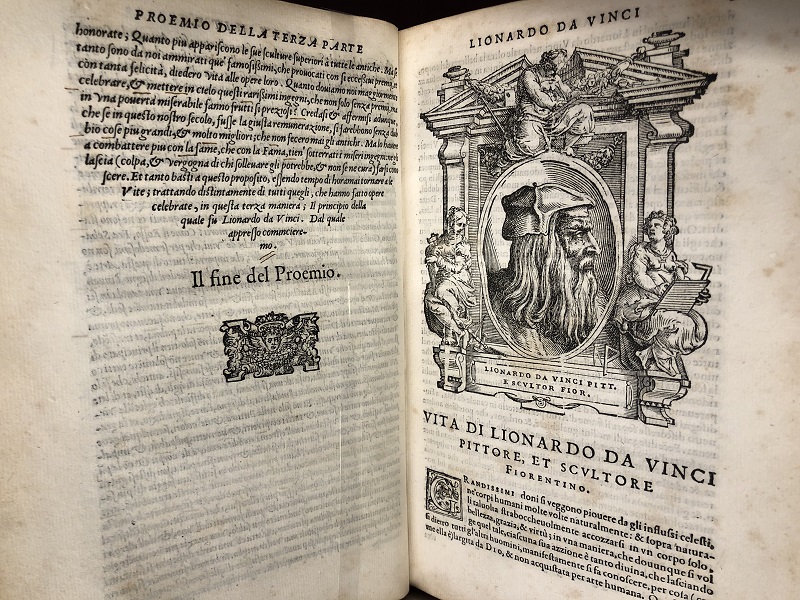 To pay tribute to the 500th anniversary of the death of Leonardo da Vinci (1452-1519), museums and other institutions throughout the world have been exhibiting works by and about the artist. Marquand Library is currently displaying the first illustrated biography of the artist’s life, published by Giorgio Vasari in 1568, and facsimiles of Leonardo’s drawings from the British Royal Collection, the originals of which were recently on display in Buckingham Palace.

In this edition of Vasari’s critical biographies of the artists he considered to be the most important up to his own era, an image of the elderly Leonardo presides over a fairly brief account of his life and work. Vasari devoted far fewer pages to Leonardo than to his illustrious contemporaries, Raphael, Titian, and especially the recently deceased Michelangelo. In spite of inaccuracies, often apocryphal anecdotes, and unabashed Florentine bias, Vasari’s publication remains one of the most important foundational texts for the study of Renaissance art.

Leonardo’s career was marked by frequent relocation to find patrons and many commissions that were either never completed or executed in experimental techniques that caused rapid deterioration. He produced relatively few paintings, of which possibly only fifteen survive, though one of these has achieved iconic status. Yet he also left hundreds of drawings and pages of scientific studies, preserved in both public and private collections. Many of these drawings are the only surviving vestiges of lost or unfinished works, and all attest to the greatness of his artistry.

The drawings in the Windsor collection can be traced directly back to their possession by Leonardo. After his death in France, according to his will, “each and every one of his books…and other tools and depictions pertaining to his art and craft of painting” went to his devoted pupil, Francesco Melzi, who took them back to Italy, where he spent 50 years attempting to organize and number the loose sheets by subject (Melzi’s numbers are noted in the labels). Acquired by the sculptor Pompeo Leoni around 1570, the drawings were mounted on pages in albums. One group, consisting of around 600 sheets mounted on 234 folios, was purchased by Thomas Howard, 14th Earl of Arundel, in the early seventeenth century. This group eventually entered the British Royal Collection sometime before 1690. During Queen Victoria’s reign, the drawings were remounted individually, facilitating display of both sides of each page, since Leonardo often worked on both recto and verso. 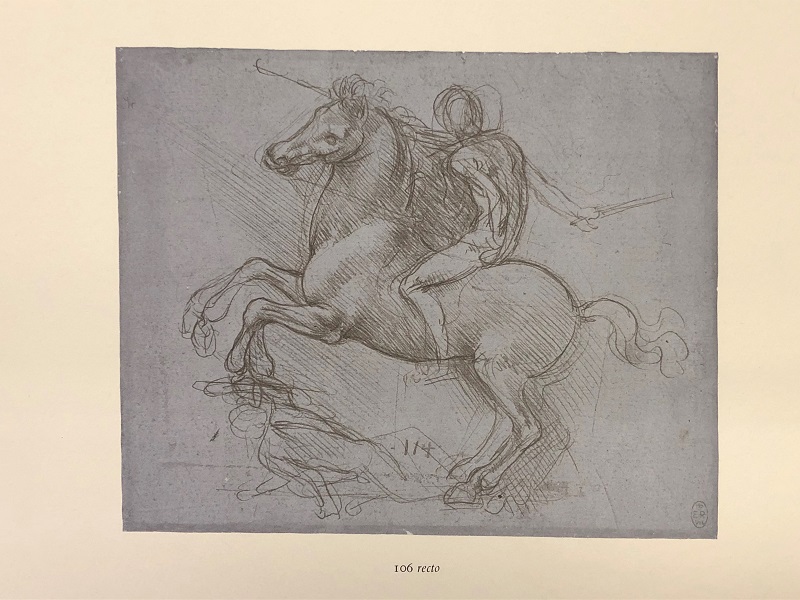 Some of Leonardo’s extensive studies of horses can be ascribed to particular projects, such as this early sketch for a monumental bronze equestrian statue commissioned by Ludovico Sforza of Milan in the 1480s to commemorate his father Francesco, renowned for his military prowess. The style of drawing, the images on the reverse of the sheet, and the relationship to other designs for the Sforza bronze all help to pinpoint the dating of this study. The statue was never executed – the bronze was sent to make cannons for the war against France and the invading French soldiers used the model for target practice – the drawings are the only remains of this major commission. 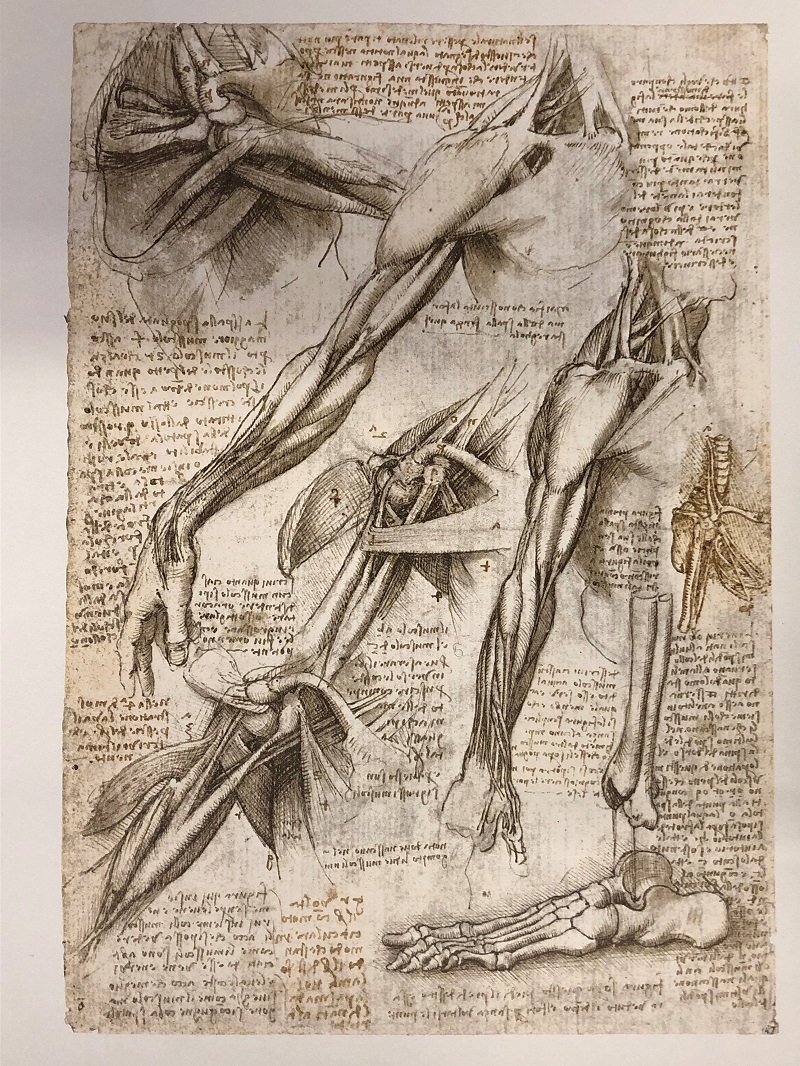 Leonardo’s study of human anatomy began as early as the 1480s, but between about 1507 and 1513 he made numerous dissections of human corpses, sometimes working with Marcantonio della Torre, a physician and professor of anatomy in Pavia. The artist’s anatomical drawings served not only as artistic studies but also for a treatise on anatomy that he worked on throughout his life and intended to publish. Had his groundbreaking discoveries been published, Leonardo, rather the Flemish Andrea Vesalius, who published De humana corporis fabrica in 1543, might be remembered as the founder of modern anatomical study. 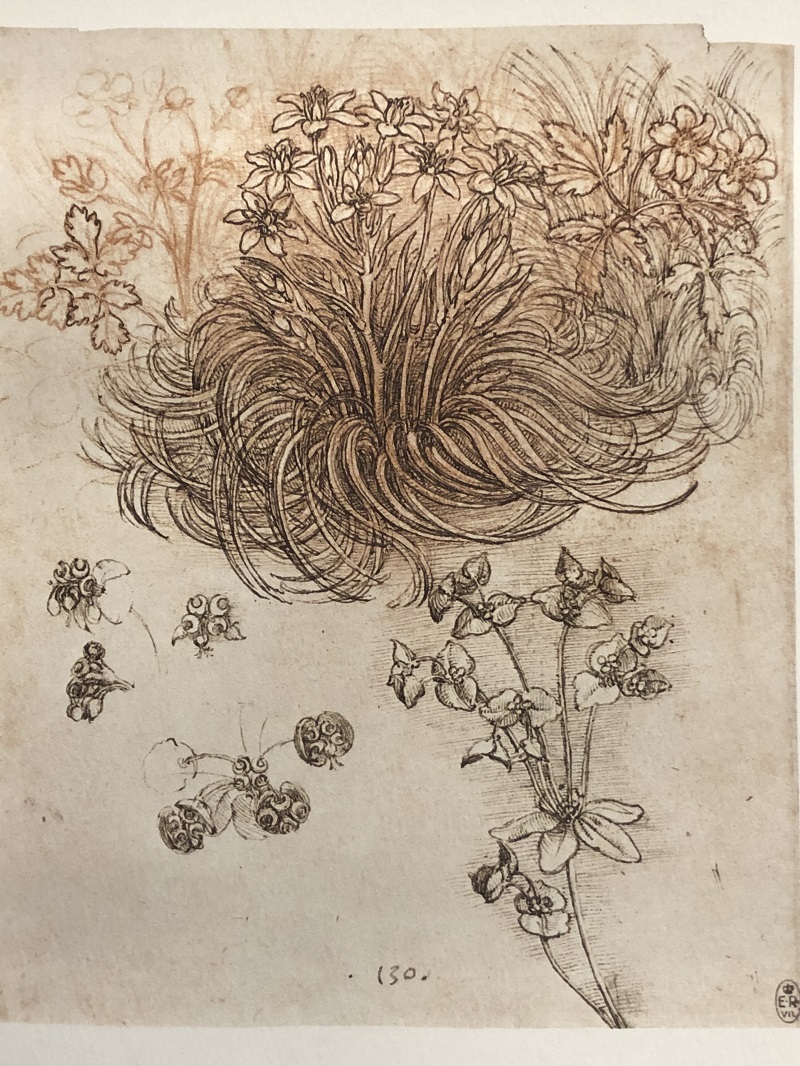 Leonardo’s drawings of natural forms range from the briefest of sketches to meticulously detailed studies, such as this botanical drawing, so precise that each plant – the of star-of-Bethlehem, wood anemone, and a sun spurge – can be identified. A similar swirl of star-of-Bethlehem is thought to have featured in the lower right corner of his oil painting of Leda and the Swan, for which he began making sketches around 1503, though the version in the French royal collection was not painted until the 1510s. The original painting was damaged and destroyed around 1700, and is only known through copies, such as the one shown here. 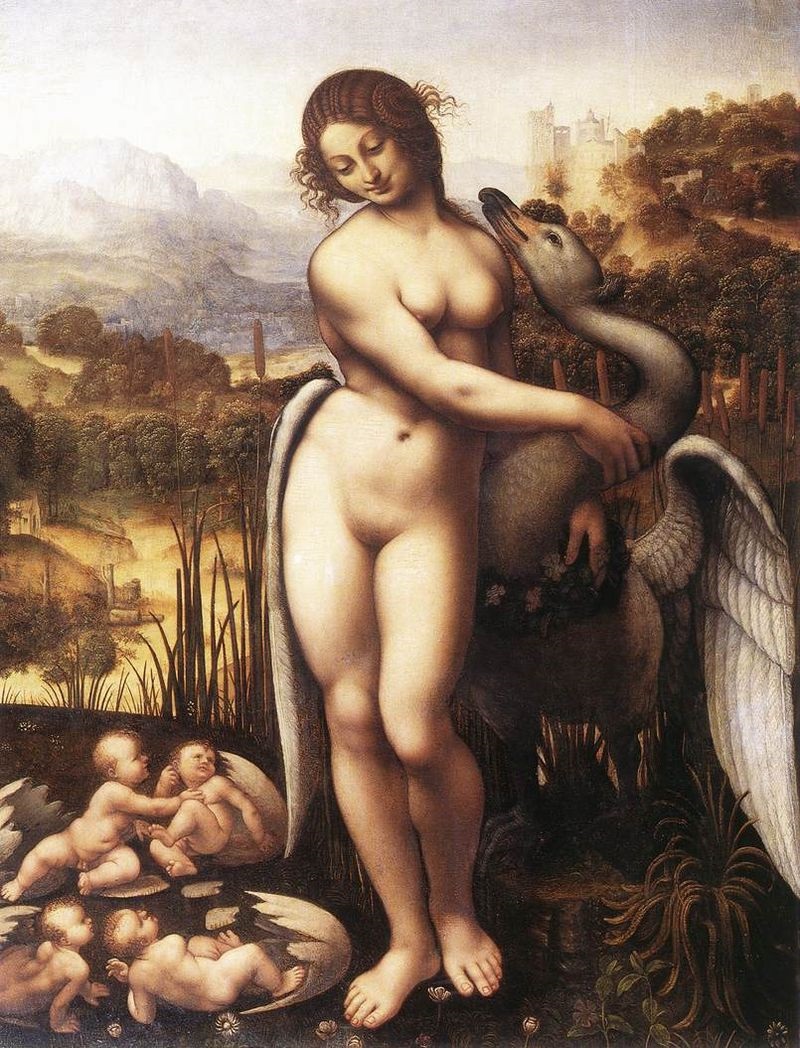 Attributed to Cesare da Sesto, Leda and the Swan, after Leonardo, ca. 1520. Oil on panel. Salisbury, Wilton House, collection of the Earl of Pembroke. 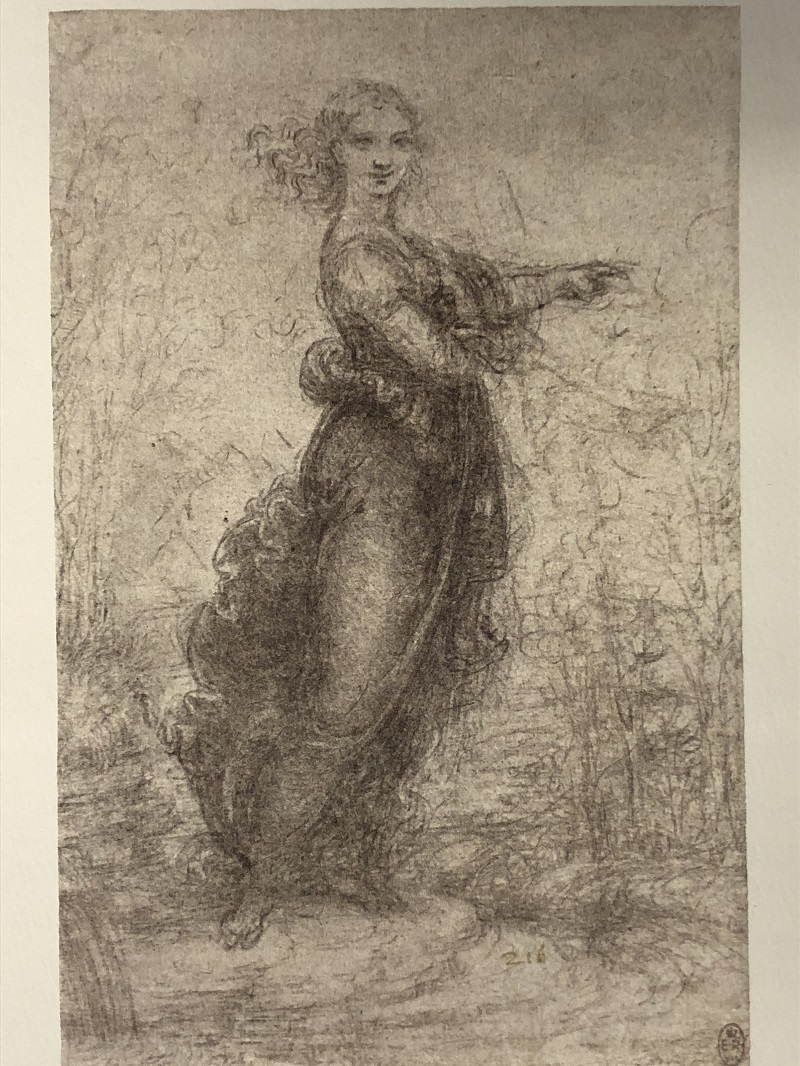 The last three years of the artist’s life were spent in relative comfort in the service of King Francis I of France, in a house close to the royal chateau at Amboise. Leonardo’s drawings from this period include awe-inspiring studies of deluges and destruction, plans for another equestrian monument (again, unrealized), and ephemeral studies for court masquerade costume, as well as this delicate drawing of young woman, thought to be a study for a character in Dante’s Purgatorio. The hazy touch of the chalk recalls the sfumato effect that the artist achieved in his paintings by using multiple thin layers of pigment, for which he was so admired. The French king’s high regard for Leonardo and the number of his paintings that remained in France after his death in 1519 enhanced the artist’s international reputation.

The facsimile sheets in the display are from: