"Adventure was promised to those who traveled the 300 mile-long Tōkaidō Road, which linked Japan’s modern capital, Edo (present-day Tokyo), with the ancient imperial capital at Kyoto from the 17th though early 20th century. For more than three centuries, illustrated books and woodblock prints created and fostered a perception that the Tōkaidō was more than a route along the country’s eastern seacoast—it was a destination in and of itself."

Marquand Library has now acquired an exciting new addition to this important group of works: a Tōkaidō bunken ezu [“proportional map of the Tōkaidō”]. It is a miniature (6.5” high) illustrated woodblock-printed handscroll that was created to offer potential travelers (or armchair travelers) a bird’s-eye-view of the road and its fifty-three iconic post stations. “Tōkaidō proportional maps” were a genre of map/guide developed in the 17th century that purported to be drawn to a 1 to 12,000 scale. The earliest known example was made in 1690 by mapmaker, Ichikochi Dōin and illustrated by the legendary Japanese woodblock print artist, Hishikawa Moronobu (1618-94).

The anonymous artist of the Marquand scroll, in keeping with the ongoing tradition of creating these measured maps of the Tōkaidō, quotes Moronobu’s classic images while also offering new interpretations of iconic sites. Elements from Hiroshige’s famous set of 19th-century woodblock prints, Fifty-three Stations of the Tōkaidō (1830-32) are also referenced, dating this handscroll to between 1830 and the early 20th century when the Tōkaidō Road fell out of use and was largely replaced by railroad tracks. This is when the last of the “Tōkaidō proportional maps” were published. The pastel pigments, however, which are very different than the bold colors of Meiji period woodblock printing (1868-1912), further suggest a date closer to the beginning of the 20th century. It is probably roughly contemporary with Marquand’s beautiful set of eight Tōkaidō scrolls by artists Ōtani Sonyū and Iguchi Kashū that were woodblock printed over collotype in 1922. 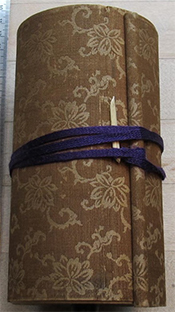 Despite its diminutive size, the handscroll’s length is staggering at a little over 46 feet long. This is the result of a change in format from its original form. Like most “Tōkaidō proportional maps,” this scroll was first created as a set of five miniature orihon [accordion books]. We can still see faint traces of the folds and the points at which the continuous images of the five folded-books were, at some point in time, joined and mounted to create this chunky–looking handscroll.

It is usually assumed that Tōkaidō proportional maps, even though diminutive, were not published for the actual traveler (who would wish to keep items carried to a minimum), but were produced for and purchased by armchair travelers, wishing to vicariously experience the excitement of traveling the great road. Our map, however, features some unusual elements that might suggest otherwise.

At every four to five rest stops depicted on the scroll, the character “haku” meaning “overnight stay” or “lodging” has been stamped in red. This same encircled character is used in Tōkaidō-themed suguroku games to indicate that you are staying the night and therefore losing a turn. Is it possible that a traveler may indeed have carried this in either miniature book or scroll form and stamped it or had it stamped along the way, in much the same way that pilgrims received stamps from religious sites visited? Did this also become a souvenir of a trip taken?

As can be seen in the two examples above, another curious addition to the original woodblock-printed design are red seals reading “ekiro no suzu,” which, like the haku seals, have been stamped on the paper sporadically at different post stations throughout the length of the scroll. The phrase has been translated as both “post-station bell” or “pack-horse bell,” and probably, through historical allusion, indicates the ability to get fresh horses at a particular site. Prior to the 12th century, station bells or post-station bells cast from red copper were issued by the government to officials or messengers traveling on official business. They served as proof of identity and gave the traveler the ability to procure fresh horses at the various rest stops. Engraved lines on the bell indicated the official’s status and determined the number of horses available to them. The phrase was then appropriated in the early 19th century by artists like Katsushika Hokusai as an alternate title to Fifty-three Stations of the Tōkaidō Road for sets of woodblock prints and woodblock-printed books. The appearance of this seal on the Marquand scroll may therefore have indicated a place to get a fresh horse while referencing the poetic titles of these earlier works. Like the haku seal, however, the repeated use of “post-station bell” seal might also suggest that this was a “Tōkaidō proportional map” that was carried and stamped on a journey along the Road. This though, will have to be a mystery for future researchers to unravel!