On Sunday, April 17, 2016, at 3:00 pm in 10 McCosh Hall, Princeton University, the Princeton University Library will host a screening of the film Carvalho’s Journey:  A New Documentary by Steve Rivo in connection with the exhibition By Dawn’s Early Light: Jewish Contributions to American Culture from the Nation’s Founding to the Civil War.  Following the screening will be a question and answer session with producer/director Steve Rivo, moderated by Martha (Marni) Sandweiss, Professor of History.  Tickets are not required, but an RSVP is requested to 609.258.9508 or dawn2016@princeton.edu.

In 1853, traveling with famed explorer John C. Frémont’s fifth westward expedition, Carvalho became one of the first photographers to document the sweeping vistas and treacherous terrain of the far American west. Carvalho, alongside mountain men, pioneers, Native Americans and Mormons, survived grueling conditions and a lack of food all the while producing daguerreotypes that became the lens through which the world experienced the region. The film, provided by The National Center for Jewish Film, is produced, directed, and written by Steve Rivo and narrated by Michael Stuhlbarg. 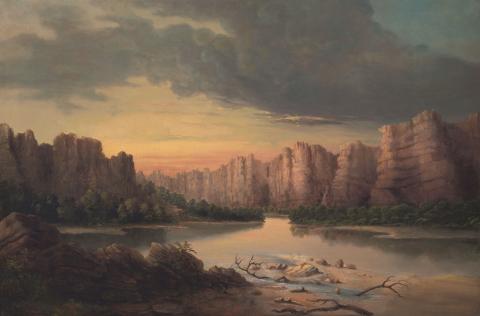 By Dawn’s Early Light, the companion exhibition, continues through June 12, 2016, at the Princeton University Art Museum and is open to the public free of charge. The exhibition showcases a rich variety of Jewish voices and imagery from the first decades of the American Republic.   Among the more than 170 objects displayed are some of the earliest novels, poems, religious works, paintings, photographs, newspapers and scientific treatises produced by Jews in the United States.

Based on gifts and loans to the Princeton University Library from Leonard L. Milberg, Class of 1953, the exhibition also features loans from nearly two dozen museums, synagogues and private collections around the country. Together, they provide a window onto an era of cultural vitality and change, illuminating the extraordinary creativity of American Jews in the new republic and the birth of American Jewish culture. Joining the exhibition on the occasion of the film screening is Grand River (Colorado River), an oil painting by Carvalho on loan from the Oakland Museum of California.

Chief organizing curator for the exhibition is Adam D. Mendelsohn, Director of the Kaplan Centre for Jewish Studies and Research at the University of Cape Town, South Africa; Co-curator is Dale Rosengarten, Curator of the Jewish Heritage Collection at the College of Charleston Library in Charleston, South Carolina, and Director of the College’s Pearlstine/Lipov Center for Southern Jewish Culture.

By Dawn's Early Light: Jewish Contributions to American Culture from the Nation’s Founding to the Civil War has been organized by the Princeton University Library. The exhibition is sponsored by and is based on the collection and gifts of Leonard L. Milberg, Class of 1953.

A wide variety of images is available on request. For more information, contact Erin Firestone, Manager of Marketing and Public Relations for the Princeton University Art Museum, at 609.258.3767 or efirestone@princeton.edu.