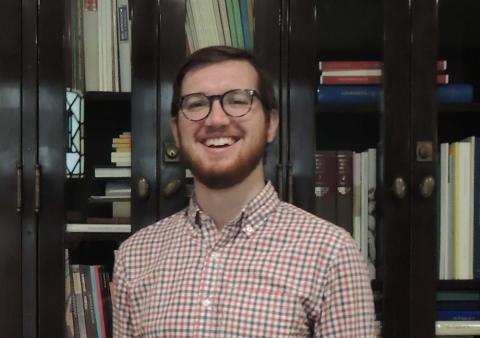 Each year more than 200 University classes utilize the Library’s Special Collections resources to provide students with the opportunity to study first-hand historical documents, books and other items seldom encountered. One such seminar class is History 521, History, Memory and Public History, taught by Professors Martha Sandweiss and Anthony Grafton.

This is the story of Christopher Parton, PhD candidate in Musicology, whose in-depth research conducted for History 521 coursework led to a search for America’s “first musical composition” among the extensive collections of Special Collections (RBSC).

Parton’s research journey began with a list of potential research topics and resources sent to the class by Gabriel Swift, Reference Librarian for RBSC. Following the provided leads, Parton came across an exhibition catalog of the American Musicological Society’s 1955 conference held at Princeton. “The extensive exhibition showcased the musical treasures of the Library,” Parton described, “and included a section about a composer I had never heard of called James Lyon.”

As he read more about the composer, he discovered that Lyon had set to music an ode written by President Reverend Samuel Davies for the 1759 commencement of the College of New Jersey (now Princeton University). The piece is arguably considered by some musicologists to be a contender for America’s first composition. “Arguably,” Parton noted, “is the operative word here, as there are many caveats and qualifications that accompany this claim.” One such consideration is the inclusion of the music of Native Americans, predating any colonial compositions. Parton stated that a more accurate descriptor for Lyon’s composition might be “the first written-down secular composition by an American-born white man.” 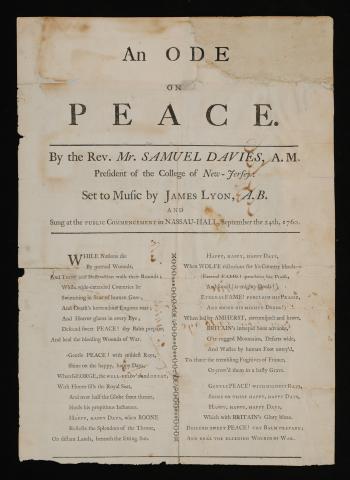 The noted musical composition is currently missing, but that didn’t stop Parton from looking. “I figured that if it was going to exist anywhere, it would probably be here,” he said, referring to the holdings of Special Collections. Since this was Parton's first time conducting extensive archival research, he was especially grateful to have the help of RBSC librarians and curators. For guidance, he turned to Gabriel Swift, Dan Linke, University Archivist and Curator of Public Policy Papers, and Sara Logue, Assistant University Archivist for Public Services. Parton quickly received “tons of information and places to look,” such as Dan Linke directing him to the commencement records in the Mudd Manuscript Library where Parton encountered a previously uncataloged original copy of the 1763 commencement entertainment.

While the musical composition for the 1759 commencement remains undiscovered, Parton’s research into the University’s history of commencement odes, ultimately led him to “piece together a more complex and revealing story of mid-18th-century American music.” His research resulted in an online Library exhibit titled “James Lyon: The Search for America’s First Composition.” In addition, as part of the Festival of the Arts celebration, an October 8th concert of 18th-century Princeton Music will be performed at the Princeton University Art Museum: “Peaceful Nassau In Thee We Sing.” 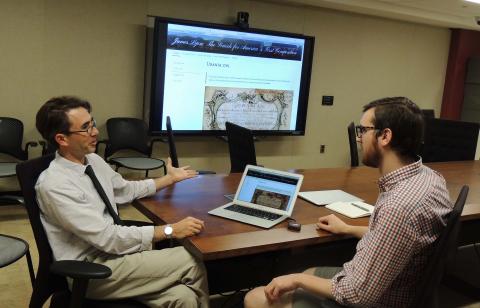 “There are still many missing pieces of the puzzle,” Parton noted. Readers, he stated, are encouraged to contact him directly if they uncover any new evidence or have questions about his online exhibition.

Parton plans to build on his research, expanding its scope to include a broader investigation into the development of American musical styles in the 18th century. He looks forward to conducting further research utilizing the Library’s collections and working with the RBSC curators and librarians. “The Department of Special Collections is an incredible resource,” he said. “And if there is a book or resource you need that is not currently available through the Library, the staff will go out of their way to find it somewhere else or even purchase it for the Library.”