Revolution-era textbook, a time capsule from Princeton's past 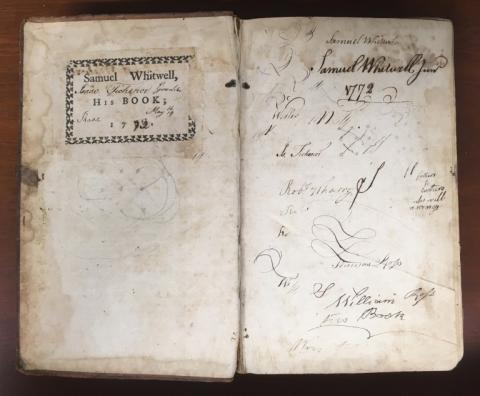 Written by Jessica Terekhov, graduate student in the Department of English

A recent gift to the Princeton University Library opens a time capsule from the university’s remote past. At the dawn of America’s Revolutionary War, when Princeton was still known as the College of New Jersey, at least four students signed their names to a copy of an assigned text. The book, volume 1 of Homer’s Iliad in Greek with parallel Latin text and notes, was printed in London in 1768, the same year that John Witherspoon, a signer of the Declaration of Independence, became the university’s sixth president. Used heavily during the 1770s, the book offers today’s Princetonians a lesson in institutional history and a glimpse of the earliest actors involved.

Samuel Whitwell, Jr. was the first of the students to have used the 1768 Iliad. His signature appears on the book’s flyleaf and title page. His father’s name appears in the printed bookplate, pasted inside the front cover, which also bears an inscription by Isaac Tichenor, who presumably inherited the book from his upperclassman. The names of Robert Wharry and William Ross, non-graduate members of the class of 1778, are written on the flyleaf.

READ MORE on the Notabilia blog.