Princeton Collections of the American West 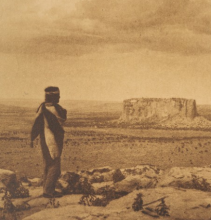 The Princeton Collections of the American West were born with the 1947 gift of the collection of imprints and manuscripts focused on overland narratives, the cattle trade, and the Rocky Mountain West gathered by Philip Ashton Rollins, Class of 1889. Mr. Rollins was a gentleman scholar whose book on the cowboy is widely admired. This gift of Rollins and his wife, Beulah (Pack) Rollins, not only reoriented all previous acquisitions in the subject at Princeton, but remains a lodestone attracting other Western collections. When the Rollins collection took its place in the newly opened Firestone Library, Princeton’s interest in the American West was clearly set out. In 1962, when a curator to the collection was appointed, the strengths in Princeton’s holdings on the West – the American Indian, indigenous languages and peoples of Mesoamerica, the Rocky Mountain states, the Spanish Southwest, the Mormons, territorial imprints, and the popular image of the West – were especially pursued.

The Sheldon Jackson collection of photographs of American Indians – some 1600 albumen prints given to Princeton in 1880 – was rescued from the open stacks, and has been vigourosly supplemented by purchase and gift. J. Monroe Thorington of the Class of 1915, a physician, alpine historian, and explorer of watersheds in the Canadian Rockies, was also a book collector. Thorington’s family were Forty-niners in California and Fifty-niners in the Colorado mines. One Thorington served as mayor of Davenport, Iowa in the years of its crucial importance as an outfitting center for westward migration. Another Thorington was consul at Aspinwall, in the path of western migration via the Panama route. Members of the Thorington family ran surveys for western railroads and were friends of Kit Carson, living in Taos and Santa Fe in the heyday of the Santa Fe Trail. Given this background, it was natural that once Thorington enriched the Princeton library’s holdings of alpine materials, he would turn to building a collection of Western Americana.

The Thorington collection expanded Princeton’s holdings to include more on the Canadian West and to concentrate particularly on the Southwest and its Indian populations. Collecting with great enthusiasm in his last years, Thorington made a generous bequest of an endowment to be used for acquisitions. This is the base of the collections’ additions today. With the guidance of Alfonso Ortiz, a member of San Juan Pueblo and also a professor of anthropology at Princeton, the collections on the indigenous peoples of the Southwest and 20th-centiury Indian affairs were enriched to include such archives as that of the Association on American Indian Affairs and a series of private papers concerning the crusade to return Blue Lake to Taos Pueblo. Among many other collectors whose gifts have enriched the collection are J. Lionberger Davis, Class of 1900, who enabled us to add many significant territorial imprints; Thomas Baird, Class of 1945, whose interests included Nebraska and Indians, and David Pierce, Class of 1967, who continues to add Mormon publications to the holdings. Princeton’s Mormon collection, especially for the Utah territorial period, is probably the most comprehensive outside Utah. A collection of ephemeral works on Colorado mines is a memorial to John Charles Amesse, Class of 1964. And, in recent years, a generous Yale man, William Reese, who happens also to be the pre-eminent dealer in Western Americana, has enriched Princeton’s holdings on the cattle trade by his gifts.