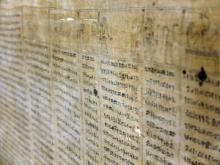 The Kienbuch Angling Collection (C0245) houses more than 100 bound manuscripts and five boxes of manuscript material. The collection consists of manuscripts and letters relating to the history and method of angling collected by Kienbusch (Princeton Class of 1906). These range from "The Art of Angling" (circa 1651) by Thomas Barker to Edward Hewitt's "Articles on Fish and Fishing" (1947). Most of the works are by 19th-century English authors, with some by 20th-century Americans. Included are Joseph Crawhall's "The Compleatest Angling Book" (1881), Biblioteca Piscatoria by William Harrison, Fishless Days (1954) by Alfred W. Miller, Memoirs of Eminent Sportsment by Frederick Pond, and The Natural History of Cornish Fishes (1884) by Jonathan Couch.