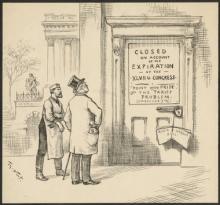 The Manuscripts Division has very significant holdings on American history during the period 1750-1865. Most extensive are the Edward Livingston Family Papers, comprising 165 boxes of papers as well as maps, rolls, and other artifacts pertaining to this Hudson Valley family. Particularly important are the papers documenting the career of Edward Livingston (1764–1836), diplomat, statesman, and legal theorist. These papers include his correspondence with renowned lawyers, economists, jurists, and politicians, and document his work on the Louisiana Civil Code and advocacy of penal reform and the abolition of capital punishment, as well as his role in President Andrew Jackson’s administration as a supporter in the Congress and Senate, and later as U.S. Secretary of State and minister to France. Perhaps the most important document in his papers is his draft of the “Nullification Proclamation,” written by Livingston for Jackson during the Nullification Crisis in 1832.  Complementing the Edward Livingston Family Papers are the related Delafield Family Papers, including papers of Joseph Delafield (1790-1875), a lawyer, soldier, and scientist.

Among other important collections are the Blair and Lee Family Papers, including papers of the political journalist Francis Preston Lee; the Rush Family Papers, particularly the diplomat Richard Rush, John Witherspoon Collection, and the Stockton Family Papers of Princeton. The Manuscripts Division also has the Andre De Coppet Collection, a rich autograph collection with correspondence of George Washington, Thomas Jefferson, Abraham Lincoln, and many other leading figures in American history. Among the best holdings for the Revolutionary Era are the Louis-Alexandre Berthier Collection of maps (with accompanying journals), documenting the historic march of Rochambeau’s army from Rhode Island to Virginia in 1781, passing through New Jersey and showing the encampment at Princeton (August 31-September 1) and the Collège (that is, Nassau Hall), the gift of Harry C. Black, Class of 1909; and the letters written by Charles Thomson, Secretary of the Confederation Congress, to his wife Hannah, in Philadelphia, while the Congress was convened at Nassau Hall, June-October 1783. Also held are selected papers of various New Jerseyans in public life (Elias Boudinot and William Churchill Houston, delegates to the Continental Congress; U.S. Vice President Aaron Burr, Jr.; N.J. governors William Paterson and Garret D. Wall. Particularly rich are the papers of U.S. Senator and N.J. Governor Samuel Southard, who served as a member of the N.J. Supreme Court, Attorney General, and Governor, as well as U.S. Senator from 1832 to 1842 and leader of the Whig Party. The Manuscripts Division also holds substantial collections of Western American overland journals, historical photographs, and other materials (see Western Americana).

You are currently only seeing content in the Manuscripts Division. You can also explore American History material in all divisions.