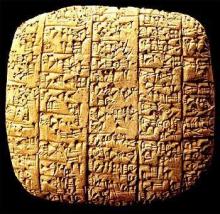 The Manuscripts Division has approximately 1,350 baked and unbaked clay tablets, opened and unopened tablet cases, clay cylinders, nail-shaped cones, pyramid-shaped tags, and other items. Cuneiform writing on clay was in use for approximately three thousand years to record literary texts, school exercises, mathematical computations, and especially documents in Sumerian, Akkadian, and other Mesopotamian languages in what is now Iraq. However, the bulk of the Princeton collection is documentary and archival in nature, chiefly dating from the Third Dynasty of Ur or the Old Babylonian Period (dated 2112-2004 BC and 2004-1595 BC, in accordance with the "Middle Chronology"). Most of Princeton's clay tablets were excavated more than a century ago, beginning in the 1890s and continuing into the early years of the 20th century and are among the earliest acquisitions of the Department of Special Collections. The Princeton Cuneiform Collection is comprised chiefly of temple accounts and other economic and administrative documents from the temples of Telloh, Jokha, and Drehem (modern place names for the ruins of the ancient Girsu, Umma, and Puzrish-Dagan in Southern Mesopotamia. For more information about the Manuscript Division's Princeton Cuneiform Collection (C0848), see the finding aid, which also lists four Scheide Library items: https://findingaids.princeton.edu/collections/C0848.  Not listed is the Manuscripts Division's collection of 244 stone seals (C0849) from the collections of Moses Taylor Pyne; Robert Garrett, and Edward D. Balken. Such seals were used to make impressions in clay tablets and their cases. The Assyriologist Rudi H. Mayr has prepared a partial checklist (unpublished and not available online) of the Princeton collections of stone seals, including those in the Princeton University Art Museum, which also has monumental cuneiform inscriptions donated by Robert Garrett. Finally, Special Collections at the Speer Library of the Princeton Theological Seminary, an independent educational institution located in Princeton, has a substantial cuneiform collection, with some three thousand items. These have been cataloged at the University of Pennsylvania and are available at Speer Library.

You are currently only seeing content in the Manuscripts Division. You can also explore Ancient History material in all divisions.