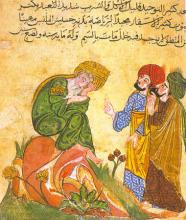 The Manuscripts Division holds nearly 10,000 volumes of Arabic, Persian, Ottoman Turkish, and other manuscripts of the predominantly Islamic world, written in Arabic script. This is the largest such collection in North America and one of the finest in the Western world. Approximately two-thirds of the manuscripts came to Princeton in 1942 as part of the Garrett Collection, donated by Robert Garrett (1875–1961), Class of 1897. Building on this extraordinary collction, the Library has continued since 1942 to acquire Islamic manuscripts by gift and purchase. Text manuscripts on virtually every aspect of Islamic learning, both religious and secular, are the chief strength. Princeton's holdings also include Persian and Mughal illuminated manuscripts and miniatures. Other collections include European manuscripts written in Arabic script or containing translations. Arabic papyri are separately housed in the Princeton Papyri Collections. Voyager has bibliographical records for nearly all Islamic manuscripts at Princeton:

Digitized manuscripts are accessible through the Princeton Digital Library of Islamic Manuscripts:

You are currently only seeing content in the Manuscripts Division. You can also explore Islamic Manuscripts material in all divisions.