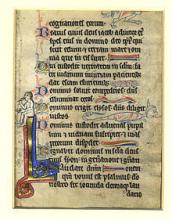 The Department of Special Collections has very significant holdings of western medieval, Byzantine, and Renaissance manuscripts, ranging in date from the 9th to 16th centuries. Most of them are in the Manuscripts Division, in the collections of Robert Garrett, Class of 1897; Robert Taylor, Class of 1930; Grenville Kane; and the growing Princeton Collection of Medieval and Renaissance Manuscripts. While Latin texts are predominant, there are excellent holdings of Byzantine and post-Byzantine Greek manuscripts, vernacular manuscripts in Middle English, Old French Italian, Spanish, German, Dutch or Flemish, and other languages. Also found in these collections are hundreds of separately described miniatures, leaves, and cuttings. The Scheide Library, whose bequest to Princeton by William H. Scheide, Class of 1936, was announced in February 2015, has upwards of 100 manuscripts. There are also a number of manuscripts in the Cotsen Children’s Library; and a small number of other manuscripts in other manuscript series or bound with printed books. In addition, the Manuscripts Division also has thousands of medieval and Renaissance documents, especially in the John Hinsdale Scheide Collection (C0704); Ernest Cushing Richardson Collection (C0341); Charles Carroll Marden Collection of Spanish Documents (C0279); and the Bruce C. Willsie Collection of British Sigillography (C0953).

Two published catalogs provide full textual and codicological descriptions of medieval, Byzantine, and Renaissance manuscripts (through 1600), illustrated with hundreds of color plates. The published catalogs are complemented by an online checklist; individual bibliographic records being added to Voyager, the Princeton University Library’s online catalog; and fully digitized manuscripts in the Digital Princeton University Library, especially in Treasures of the Manuscripts Division.

Due to conservation concerns, the use of a few manuscripts is restricted. For additional information, please contact the Special Collections Department.

You are currently only seeing content in the Manuscripts Division. You can also explore Medieval and Renaissance Manuscripts material in all divisions.