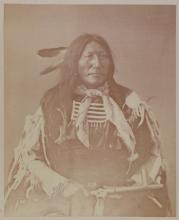 The Records of the Association on American Indian Affairs (MC147) document the corporate life of an influential and resilient player in the history of twentieth-century Native American advocacy. More than 500 boxes record the associations formation by non-Indians in New York in 1922 to its re-establishment in South Dakota in 1995 under a wholly Indian administration.

The McCarter and English Records on U.S. Indian Claims Cases (WC030) consists of materials collected by the law firm of McCarter & English of Newark, New Jersey in connection with representation of the Iowa, Sac and Fox, Otoe and Missouria, and Omaha tribes before the United States Indian Claims Commission between 1958 and 1970.

The Taos Blue Lake Collection (MC106) brings together four discrete collections: the papers of Barbara Greene Kilberg, a White House Presidential Fellow at the time of the dispute; the papers of Corinne Locker, secretary to Association on American Indian Affairs (AAIA) president Oliver LaFarge (1901-1963) and later AAIA Southwest Field Secretary; the papers of Rufus G. Poole, regional attorney for the AAIA in New Mexico, and the papers of William G. Schaab, an Albuquerque attorney who became involved in the fight in 1967.

You are currently only seeing content in the Public Policy Papers. You can also explore Native American History material in all divisions.