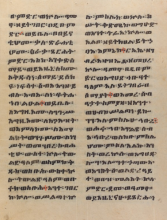 The Manuscripts Division has one of the largest collections of Ethiopic manuscripts outside Ethiopia, including nearly 180 codices (bound manuscripts) and more than 500 magic scrolls (amulets), dating from the 17th to 20th centuries, chiefly written in Ge'ez, the sacred language of the Ethiopian Orthodox Church, with small amounts of text in Amharic. Text manuscripts include Gospel Books, Psalters, the Book of Enoch, homilies, liturgy, chant, saints’ lives and miracles, theology, law, and compilations of texts related to divination and popular magic. There are also several manuscripts illuminated in the Second (or late) Gondar style, which emerged in the old imperial capital of Gondar in northern Ethiopia from the 1720s and 1730s. Princeton's best Ethiopic manuscripts were collected by Robert Garrett, Class of 1897, and donated to Princeton in 1942. Garrett acquired the bulk of his Ethiopic manuscripts from the eminent German philologist Enno Littmann, who led a Princeton expedition to Tigray in 1905. The following year, Littmann led a German expedition to Aksum. In the years since the Garrett donation, Ethiopic manuscript holdings have continued to grow by gift and purchase. In recent years, Bruce C. Willsie, Class of 1986, has been the principal donor of Ethiopic manuscripts, especially magic scrolls. For more information, consult the 450-page online catalog Ethiopic Manuscripts in the Princeton University Library.  In addition to the Manuscripts Division, there is one Ethiopic manuscript each in the Scheide Library and Cotsen Library, and an additional one in the Princeton University Art Museum.

You are currently only seeing content in the Manuscripts Division. You can also explore Ethiopic Manuscript Collections material in all divisions.