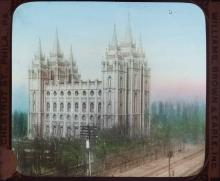 The Western Americana collections are extraordinarily strong in books relating to the Mormon sects and Mormonism. Princeton's Mormon collection, especially for the Utah territorial period, is probably the most comprehensive outside Utah. Over 500 subject headings cover more than 3,000 books, chiefly in the Western Americana collections, but also in the General Rare Books Collection (Ex). Highlights include first editions of the Book of Mormon (1830) and Doctrine and Covenants (1835). Notable holdings in the Manuscripts Division include three letters by Brigham Young, one to his fourth wife, Harriet Cook Young, about his trip out West (1846) and a letter (1862) to him authorized by Lincoln from Adjutant General L. Thomas, calling on Young to raise a cavalry company of Utah militia to protect the property of the Telegraph and Overland Mail Company.

Also, for further information on early Mormon books in the collection see Alfred L. Bush, "A Quorum Called Out of the Kingdom" in the Princeton University Library Chronicle XLII, 1 (Autumn, 1980) pp. 55-59. [full text]. An informal catalog of the exhibition with photocopies of each exhibit's title page has call number (ExB) 0639.739 no. 55

The collection contains three letters by Brigham Young, one (1846) to his fourth wife, Harriet Cook Young, about his trip out West and two (1872, 1873) to fellow Mormons; a letter (1862) to him authorized by Lincoln from Adjutant General L.

Norman C. Pierce Papers The collection consists of papers of Pierce, including personal correspondence, financial papers, a photograph album of a trip to Germany in 1927, family photographs, clippings, travel memorabilia and notes, articles (by others), and printed matter relating to Mormonism in Utah.

Several notable Mormon prints and photographs are housed in the Graphic Arts Collection, including prints of Hafen's Last Public Address of Lieut. Gen. Joseph Smith, ca. 1888, and the Martyrdom of Prophet Joseph Smith, 1890 (see: Navoo Legion).  These pieces and additional holdings can be found by conducting a keyword search for Mormon in the library catalog with search limits set to Sepcail Collections and Visual Material. See: Mormon Graphic Arts Search Results

You are currently only seeing content in the Princeton Collections of the American West. You can also explore Mormons and Mormonism material in all divisions.