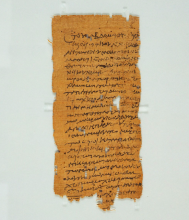 The Manuscripts Division holds more than a thousand papyri, dating from approximately 1250 BCE to 900 CE. Best known are Princeton’s literary, early Christian, and sub-literary papyri. Among authors represented are Aristophanes, Demosthenes, Euripides, Herodotus, Hippocrates, Homer, Isocrates, Theocritus, and Xenophon. A much larger number are Greek documentary papyri, including census and tax registers, military lists, land convey-ances, business records, petitions, private letters, and other sources of historical and paleographic interest from Ptolemaic (332-30 BCE), Roman (30 BCE-300 CE), and Byzantine Egypt (300-650 CE). Nearly all were discovered from the 1890s to the 1920s, buried or recovered from mummy cartonnage in and around the ancient Egyptian town of Oxyrhynchus and the Fayum towns. The Princeton collections also include papyri in Egyptian languages (Hieroglyphic, Hieratic, Demotic, and Coptic); Arabic papyri from the Islamic period (from 640 CE); and a smaller number of Latin papyri from Roman Egypt and Ravenna. For detailed holdings information about Princeton’s holdings, consult the Preliminary Checklist of the Princeton University Collections of Papyri, which is accessible as part of the Princeton University Library Papyrus Home Page.  The Princeton University Digital Library offers digital images of 248 papyri in the Princeton Papyri Collections, with more to be added in the future: http://pudl.princeton.edu/results.php?f1=kw&v1=papyri

Additional papyri are in The Scheide Library and Cotsen Children’s Library.

You are currently only seeing content in the Manuscripts Division. You can also explore Papyrology material in all divisions.