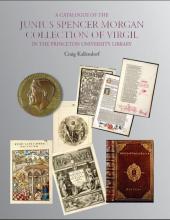 Junius Spencer Morgan (1867-1932), Class of 1888, and A.M. 1896, was a nephew of the celebrated John Pierpont Morgan, the great financier. J. S. Morgan began collecting as a student, and was early attracted to Virgil probably through the influence of Dean West. The gift of the collection, valued at $50,000, was made in December 14 1896 issue of the Daily Princetonian. In each succeeding year until his death, Morgan added volumes to the collection. (His very last gift was "an Aeneid printed by Wolfgang Stoeckel of Leipzig in 1511, which arrived at the Library just three weeks before the donor's death in 1932.") He said of the collection in 1929:

For a book collector, and that is all I pretend to be, you can readily understand that a collection of editions of [Virgil's] work covers a large and interesting field. Everyone who had even a small library would be sure to have a Virgil and the large libraries many different editions. The dilettante, as well as the scholar, would have his copy. The result is that the collector can hope to find Virgils that have belonged to people of importance and interest. The publishers whom I have mentioned, as well as many others, vied with one another in publishing handsome editions, both as to typography and paper; many were printed on vellum. In each period, the services of the best artists have been called in to illustrate the books; the best binders, to bind copies. We thus have in a collection of Virgils an opportunity to gather together books representative of every period in the history of printing, illustration, and binding, since printing was invented. One may realize the truth of what I have said by examining the Virgils in the Treasure Room of Princeton University Library.
[J.S. Morgan, et al., The Tradition of Virgil, (Princeton, 1930), p. 9.]

The Library has continued to expand the collection. Because of the high esteem Virgil held since even before printing began, the collection covers not only early, unusual, or scholarly editions and translations but also outstanding examples in the history of fine printing, book illustration, and book binding. The collection includes the only copy in the United States of the first edition of his Opera (Rome, Sweynheym and Pannarta, 1469), the first Virgil printed in France (Paris, 1470-1472), the important editions of Aldus Manutius, Giunta, Estienne, Plantin, Elzevir, Tonson, Baskerville, Foulis, Heyne, Bodoni, and Didot, as well as a 1541 Aldine Virgil bound for Jean Grolier and the 1524-32 Estienne folio edition of the Opera, which belonged to Philip Melanchthon, with his notes [(VRG) 2945.1532q]. Today, the collection numbers more than 700 titles (ca. 900 volumes). and includes as well 13 manuscripts. The Virgil collection stands among the leading collections in the world for its scope. Included are: 1. 346 editions of the complete works of Virgil, 34 of which are incunabula. 2. Translations of Virgil into: mostly English, French, Italian, Spanish, Dutch, and German, but also Polish, Portuguese, Czech, Greek, Romansch, Hungarian. For a listing of the Virgil holdings complete through 1990, refer to this web-available document. This web-available listing updates a 1956 publication [Shirley Weber. The Vergil Collection in the Princeton University Library: A Checklist and a Descriptive Catalogue. (Princeton, 1956) [(ExB) 2945.073]] to include additions to VRG made between 1956 and 1990. These additions were given "a" numbers, that is, numerations by interpolation between existing numbers in the Weber catalogue, as in the series: 501, 501a, 501b, 502, 503. The incunabula in the Virgil collection are of special importance for North America in light of the following: "Virgil has made more headway among American collectors of the last hundred years, for 84 editions are now found in the USA. [That is, 84 of the over-all 185 incunabular period editions.] The outstanding collection is Princeton University Library, whose Junius Morgan collection of Virgiliana has 46 editions of the poet, 16 of which are the only copies recorded in the country, and three of those are unknown anywhere else. Were it not for Princeton's special strength in this area, the editions at the Huntington Library (26) and indeed at the Pierpont Morgan (13), Harvard and Yale (12 apiece), would assume greater prominence as the considerable feats of collection building that they are. " Martin Davies in his Vergil: A Census of Printed Editions 1469-1500 (London: Bibliographical Society, 1992) No. 7 in their Occasional Papers of the Bibliographical Society.

You are currently only seeing content in the Rare Book Division. You can also explore VIRGIL material in all divisions.