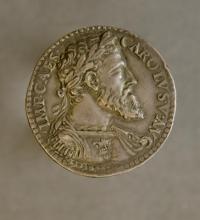 Greek coinage: over 4,000 Greek-inscribed coins of the Classical and Hellenistic periods (ca.550-30 BCE). Unusually large holdings include the Baldwin Maull, Class of 1924, gift of silver staters and fractions of Tarentum (314; Maull’s handwritten catalog, with provenances, accompanies the collection), 122 of which are described in W. Fischer-Bossert,Chronologie der Didrachmenprägung von Tarent (Berlin, 1999); these have been the subject in recent years of an effort to create an algorithm for die identity based on 3D scans. Another area of special strength is the coinage of the Seleucid kings of the Levant. A large collection of Parthian material was given by or purchased from J. Christy Wilson in the 1920s, including many unstudied small Parthian bronzes. Among important recent gifts are about 350 coins donated by Mark and Lottie Salton in 1996 and 1998.

Roman Coinage, including “Greek imperials”. Over 7,000 coins:1,000 of the Roman Republic, mostly silver; over 5,200 of the Roman Empire, mostly silver and bronze, to Anastasius (ca.35 BCE-491 CE). Contents of the Firestone Princeton collection from the Republic through Commodus (ca.2,000 coins) have been published by B. Levy and P.C.V. Bastien, Roman Coins in the Princeton University Library I (Wetteren, 1985).There are notable holdings in the coinage of Roman Corinth, the 1976 gift of Prof. and Mrs. T. Leslie Shear, Jr.; about 100 of these are recorded in M.Amandry, Le monnayage des duovirs corinthiens (Paris, 1988).

With the Greek and Roman coins should be mentioned two associated holdings: (1) The foundation piece of Princeton’s collection, a group of over 5,000 plaster casts of classical coins, bought by friends and alumni of the institution in 1849, and still in their original wooden trays. (2) Twelve cased volumes of impronte, i.e. plaster casts of classical (and neo-classical) intaglio gems, made up by the Roman firm of Paoletti, active in the 18th and 19th centuries.

You are currently only seeing content in the Numismatic Collection. You can also explore Greek and Roman Coinage material in all divisions.