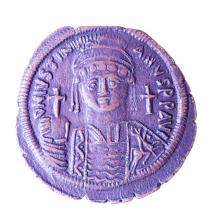 The core collection contains about 700 coins in gold, silver, bronze. Some of these have been described, together with examples in the Princeton University Art Museum, in S. Curcic and A. St. Clair, eds.,Byzantium at Princeton (Princeton,1986). The Byzantine coins from Princeton’s Antioch Excavations of the 1930s number about 3,000, chiefly bronze denominations from the period up to about 650 and during the tenth and eleventh century Byzantine re-occupation of the area.  These holdings are constantly being expanded, with the support of the Center for Hellenic Studies and the Stanley J. Seeger Hellenic Fund; the acquisition of the Peter Donald Collection in 2016 added about 6,000 Byzantine coins, chiefly in silver and bronze up to 1204, and in all metals thereafter.

You are currently only seeing content in the Numismatic Collection. You can also explore Byzantine Coinage material in all divisions.