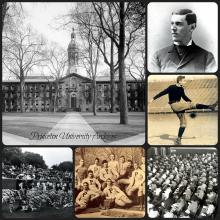 Non-cooperative Games, May 1950, is available in PDF format Non-Cooperative_Games_Nash.pdf. The dissertation is provided for research use only.

In the movie A Beautiful Mind there is a scene in which faculty members present their pens to Nash. What is the origin of the pen ceremony? When did it start?

The scene in the movie, A Beautiful Mind, in which mathematics professors ritualistically present pens to Nash was completely fabricated in Hollywood. No such custom exists. What it symbolizes is that Nash was accepted and recognized in the mathematics community for his accomplishments. While some movies are based on books, the film A Beautiful Mind states that it was inspired by the life of John Nash. There are many discrepancies between the book and the film.

May I have a copy of Nash’s 1994 Nobel Prize acceptance speech?

At the Nobel Prize Award ceremony, His Majesty the King of Sweden hands each Laureate a diploma, a medal, and a document confirming the Prize amount. The Laureates do not give acceptance speeches. The scene in the movie A Beautiful Mind in which Nash thanks his wife Alicia for her continued support during his illness is fictional.

Laureates are each invited to give an hour-long lecture; however, the Nobel committee did not ask Nash to do so, due to concerns over his mental health.