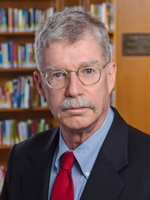 John Logan (A.B., Princeton University; Ph.D., Yale University) joined Princeton University Library as Literature Bibliographer in 1986 after 17 years of teaching at Yale, Princeton and Penn State University. He was a Fulbright fellow in the academic year 1966-1967 and a National Endowment for the Humanities fellow in the academic year 1982-1983. His scholarly interests include Renaissance and 17th-century English and French literature. He is a Wilson College fellow and adviser.