The loan period for the Public and International Affairs Collection (SPIA) and SPR materials for faculty, graduate students, under-graduate seniors, and regular staff is one semester. For other undergraduates and guests, the loan period is 4 weeks.

An item may be renewed if no one else is waiting for it. If you have difficulty renewing an item, please send an email to piaprlib@princeton.edu. Items may be charged out and returned to the circulation desk. Certain collections, such as journals and reference materials, do not circulate.

If you find an item in the Main catalog but it is already charged out to another person, you may recall the item. You will be notified by e-mail when the item is available for pick-up. When an item is recalled the person who has the materials will have 10 days to return it before fines of $1.00 per day are assessed.

Unless otherwise specified, Reserve materials circulate for 3 hours. The exception to this is items charged within 3 hours of closing time. Those materials are due the following morning when the library opens. During the academic year, this is as follows

If you are not able to find materials you are looking for on campus, fill out an interlibrary loan request or consult with a librarian. We will attempt to borrow the item from another library, or obtain a printed copy for your use. 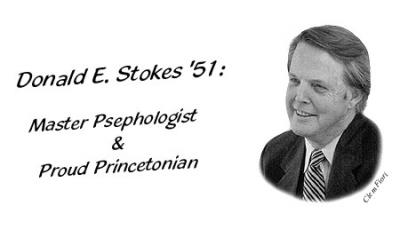 A specialist in public opinion research, Stokes worked with Oxford colleague David Butler in the early 1960s on the first-ever nationwide study of the British electorate. The books he co-authored, Political Change in Britain, The American Voter and Elections and the Political Order, became required reading for students of politics on both sides of the Atlantic.

“Reading one of his books or papers, one knew one was in the presence of a master,” British political scientist Anthony King recalled two years ago in The Guardian, following Stokes’ death from leukemia at the age of 69. “Gracious and invariably well-dressed, Stokes, had he been British, would have been a grandee, and he took great pride in being a ‘Princeton man.’”

Appointed Princeton School of Public and International Affairs School dean in 1974, Stokes led the school, one of the foremost centers of public and international affairs, through one of its most vibrant eras of expansion. Under his tenure, the faculty doubled, and the size of the graduate program, the number of interdisciplinary courses and participation by the world’s public affairs leaders were greatly increased.

Throughout such fast-paced change, his colleagues say, Stokes maintained his magnanimity, enthusiasm, wisdom, kindness, unquenchable optimism and affection. “In all the years I knew Don, I don’t think I ever saw him lose his temper or heard him say a harsh word against anyone,” says Northwestern University Law Professor Leigh Bienen, whom Stokes hired as undergraduate dean of the Princeton School of Public and International Affairs. “He was warm, caring, and such a wonderful, broad and principled thinker. He was strong on affirmative action and women, and he could appreciate a wide variety of approaches to academic work, which is all too rare.”

In addition, Stokes was fun. Like others, Princeton Professor and Director of the Office of Population Research T. James Trussell *75 recalls Stokes’ baroque, distinct and often hilarious use of language. “A tangible benefit of knowing Don was a considerable expansion of my vocabulary,” says Trussell. “Who can ever forget words such as moiety, Ptolemaic, psephological, Copernican, and especially, spatchcocked, all rendered in pear-shaped tones during perfectly ordinary, everyday, often one-to-one conversation? 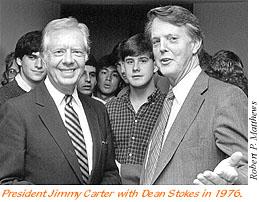 "Don taught me an extraordinary number of things,” Trussell says. “The intricacies of the love life of Edward VII, whose mistress’s daughter’s flat we shared during a wonderful year of leave in London, and the value of patiently waiting as some crisis unfolds when my natural impulse is to do something.”

“Don was a gentle person,” says Northwestern University President Henry S. Bienen, who not only followed Stokes as dean of the Princeton School of Public and International Affairs, but also once traveled with him by horse and camel to the pyramids in Egypt. “Don usually got his way; he was persistent. But he also had a great capacity to laugh at himself and to have fun. He was a serious person who wanted to do well in the world, and he did.”

Anthony King recalled the sweetness of Stokes’ relationship with his wife, Sybil, who still lives in Princeton. “They held hands in public,” King wrote. “When someone described him to Sybil as ‘the man with the golden voice,’ she replied, ‘That must make me the woman with the golden ear.’”

Reprinted with permission from Princeton: With One Accord, Spring 1999, by Kathryn Watterson published by Princeton University's Office of Development Communications.

Ansley Johnson Coale was educated entirely at Princeton University (B.A., M.A. and Ph.D.) and spent his whole academic career at its Office of Population Research, serving as its director from 1959 to 1975. He served as president of the Population Association of American in 1967-1968 and as president of the International Union for the Scientific Study of Population from 1977 to 1981. He was a member of the National Academy of Sciences, the American Academy of Arts and Sciences and the American Philosophical Society, and was a recipient of several honorary degrees from universities including Princeton, the University of Pennsylvania, the University of Louvain and the University of Liege. He was also a corresponding Fellow of the British Academy. A prolific writer, he publishedmore than 125 books and articles on a wide variety of demographic topics.He also trained and served as mentor to many students who became leaders in the field.

His first major influential work was Population Growth and Economic Development in Low-Income Countries (1958), coauthored with Edgar Hoover; the results, which showed that slowing population growth could enhance economic development, had a major impact on public policy and set the research agenda in this field.This was followed by Regional Model Life Tables and Stable Populations (1966), coauthored with Paul Demeny. These model life tables both established new empirical regularities and proved invaluable in the development of later techniques for estimating mortality and fertility in populations with inaccurate or incomplete data.Along with William Brass, Coale pioneered the development and use of these techniques, first explicated in Methods of Estimating Basic Demographic Measures from Incomplete Data (1967, with Demeny) and in The Demography of Tropical Africa (1968, with other demographers).Coale was an able mathematician (he taught radar at the Massachusetts Institute of Technology during World War II), and his Age and Structure of Human Populations (1972) is an essential textbook for those interested in formal demography.

Perhaps Coale’s major scientific contribution was to our understanding of the demographic transition.He was the intellectual architect of the European Fertility Project, which examined the remarkable decline in marital fertility in Europe. Initiated in 1963, the project eventually resulted in the publication of nine major books (culminating in The Decline of Fertility in Europe, 1986, edited by Coale and Susan Watkins) summarizing the changes in childbearing over a century in the seven hundred provinces in Europe. Toward the end of his career, Coale became interested in the population changes in China and understanding the fertility transition there as well as factors affecting the sex ratio at birth.