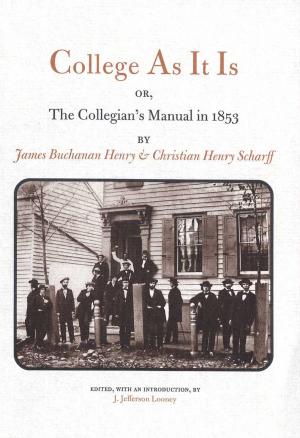 In 1853, just a few years before the outbreak of the Civil War, two seniors at the College of New Jersey (later Princeton University) wrote an account of what it was like to be an undergraduate at an institution that prided itself on attracting students from every section of the nation. Their report is one of very few to provide vivid descriptions of student life from the point of view of students themselves. From a prospective student’s first glimpse of the town and college to his graduation – including the parade of the “Fantasticals” – the authors portray the students at work and play.

James Buchanan Henry, nephew and ward of the man who became the 15th president of the United States, and his Dutch-immigrant friend, Christian Henry Scharff, have given us a rare insider’s look at student rebellions, incendiary adventures, and barring-out sprees. They include material from student publications of the day, some of it otherwise lost. They describe the famous Juggernaut Spree of 1851, when students tossed P. T. Barnum’s show wagon into the canal, and recount pranks played on Vice-President John Maclean, the diligent campus disciplinarian.

Although filled with humor, the book is also serious. Henry and Scharff discuss the curriculum and the faculty with insight and affection, while criticizing both in the light of “College as it ought to be.” They cast astute eyes on social pretension and academic ambition among their fellow students, and tell us what it was like to live in the infamous “Barracks,” the housing to which “newies” were assigned.

The introduction and notes by J. Jefferson Looney put it all in perspective, providing explanations and identifications of people, places, and events alluded to in the manuscript.