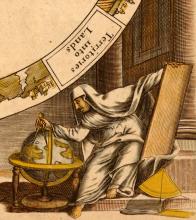 The Historic Maps Collection was created in 1986 when all post-1919 flat maps (and all topographic maps of any period) were separated from the map collection in Firestone Library and moved to the Map Collection in the Lewis Library. The remaining maps were established as The Historic Maps Collection, a separate entity in the Department of Special Collections. These maps range from the 16th-century through World War I and are for the most part flat sheets, with a small group of cased maps. While they include depictions of all areas of the world, and a few celestial sheets, the collection is especially rich in maps of North America and Western Europe. The American West (including Mexico) is a particular strength in view of the additional maps in Princeton’s collections of Western Americana. The collection also includes an extensive set historic Sanborn insurance maps (1884-1950) for hundreds of New Jersey communities (now digitized and viewable online) and a growing collection of pre-1919 guidebooks containing maps.

Besides these printed maps, there is a small collection of manuscript maps, principally road maps of New Jersey (reproduced in Howard C. Rice, Jr., New Jersey Road Maps of the 18th-century, Princeton, 1981). Among the manuscript works, the greatest treasures are a 16th-century Aztec map on deerskin, lienzos from colonial Mexico, and the original manuscript version of one-half of the depiction by Charles Mason and Jeremiah Dixon of A Plan of the Boundary Lines Between the Province of Maryland and the Three Lower Counties of Delaware... and A Plan of the... Boundary between the Provinces of Maryland and Pennsylvania, 1768. Other manuscript maps are found in collections in the Manuscripts Division, most importantly the maps created by Louis-Alexandre Berthier during the American Revolution (reproduced in Howard C. Rice, Jr. and Anne S. K. Brown, The American Campaigns of Rochambeau's Army 1780, 1781, 1782, 1783, Princeton, 1972).

Records for a large number of the printed flat maps are available in the Library's online catalog; many contain links to digital images of the maps. Use the author, date, keyword, and subject indexes to find maps of interest. The most useful is the subject index: one can find individual maps arranged by region and date. Example: "Maps - New Jersey -1800" [as subject search string] will find all New Jersey maps beginning with the date of 1800. Similarly, "Maps - North America" [subject search string] would find all maps of North America. For world maps, use "World maps -[date]".

It should be kept in mind that some of the most important maps in the Department of Special Collections will be found not in the Historic Maps Collection but in printed volumes in the rare book collections. The extensive collection of Ptolemys and other printed atlases and the early American maps in books in the Grenville Kane collection suggest the range of map materials in the Department, from the depictions of 16th-century explorers to 19th-century county atlases. The researcher is advised to mine the Main Catalog and Supplementary Catalog for bound works that include original maps. Relying solely on the collection of flat and cased maps is to ignore the greater map resources in the Department.

In March 2009, with substantial funds provided by the Friends of the Princeton University Library, supplemented with money from Rare Books, the Historic Maps Collection acquired a copy of Belgian cartographer Philippe Vandermaelen’s Atlas universel, consisting of approximately 380 conically projected sheets of maps and 40 pages of statistical tables in six volumes. This folio-size atlas is remarkable for several reasons. It is the first atlas produced by the then new printing process of lithography. It is also the first atlas to show the whole world in maps using a large uniform scale—about 26 miles to the inch. Moreover, the maps are designed to be joined into a three-dimensional terrestrial globe with a diameter of approximately 7.75 meters (almost 25 feet). The library's Digital Studio joined in our project to digitize the sheets so that they could be made available, in high resolution, over the web. In addition, because of the projection of the maps, we felt that stitching the continental maps together and wrapping their "skin" over a generic globe would provide a unique viewing experience--creating a virtual 3D version of Vandermaelen's physical globe. This was achieved by the library's GIS librarian, with some help from the university's Media Center.